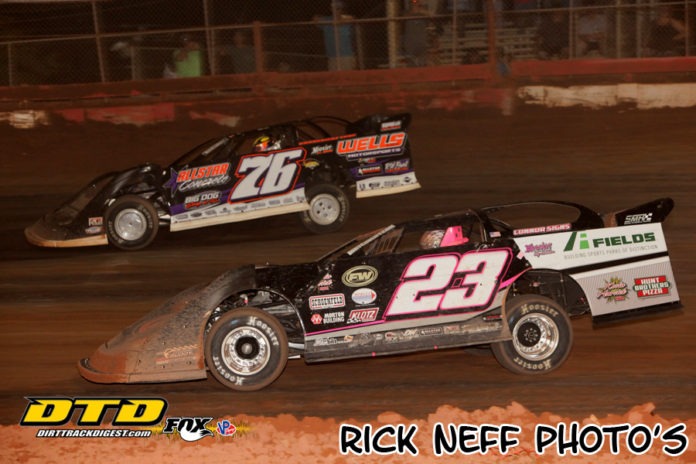 SCREVEN, GA – Brandon Overton of Evans, Ga. continued his winning ways on Saturday Night as he dominated the 53-lap feature at Screven Motor Speedway pocketing $10,053 for his efforts. This would be Overton’s 17th career Schaeffer’s Oil Southern Nationals by Sunoco Race Fuels victory, third-straight and fourth of the tour.

Brandon Overton would take the lead at the drop of the green flag, while Ross Bailes would fall into the runner-up slot, with Pearson Lee Williams, Mark Whtener, and John Henderson. Overton and Bailes would quickly put distance on the rest of while Williams and Whitener would battle for third. Overton would stretch his lead over Bailes by lap five and would begin working lapped traffic on lap ten and this would allow Bailes to close the distance between himself and Overton. However, the first caution of the race would be displayed on lap fourteen when Jimmy Sharpe, Jr. would slow in turn four. The restart would see the caution again reappear when Michael Page would slow in turn two. Once action resumed, Overton and Bailes would remain first and second, with Williams, Whitener, and Cla Knight battling three-wide for third, with Williams holding the spot, while Knight would go to fourth, and shuffle Whitener back to fifth. Overton would quietly pull away from Bailes once again until the next caution appeared for Jake Knowles on lap twenty-one who started slowing down the front-stretch and into turn one.

This restart would again see Overton and Bailes remain first and second, while another three-wide battle ensued for third, this time with Whitener, Knight, and 12th place starting Chris Madden, with Whitener holding third, while Madden would go to the fourth position, and Knight now riding in fifth. Two tours later, the final caution of the event would appear for Wil Herrington after he spun his machine in turn four. Overton would again get a great restart, while Bailes and Whitener would battle for the second position, with Whitener grabbing the position away from Bailes. Overton would extend his lead over Whitener until Overton would start working slower traffic again by lap forty and Whitener would begin to close in on Overton. However, Overton would work lapped traffic masterfully during the final circuits of the contest and see the checkered flags wave first, with Whitener settling for runner-up honors, while Bailes would come home in the third position. Madden and Knight would complete the top five finishers. Seventeenth-place starter John Baker would charge through the field in the second half of the event to head up the second-five finishers by taking sixth, with Williams, Herrington, Trent Ivey, and Jeff Smith completing the top ten finishers.

The next event for the Schaeffer’s Oil Southern Nationals Series will be Sunday July 19, 2020 at Cochran Motor Speedway in Cochran, Ga. paying $3,500-to-win. This will mark another first-time track on the tour.