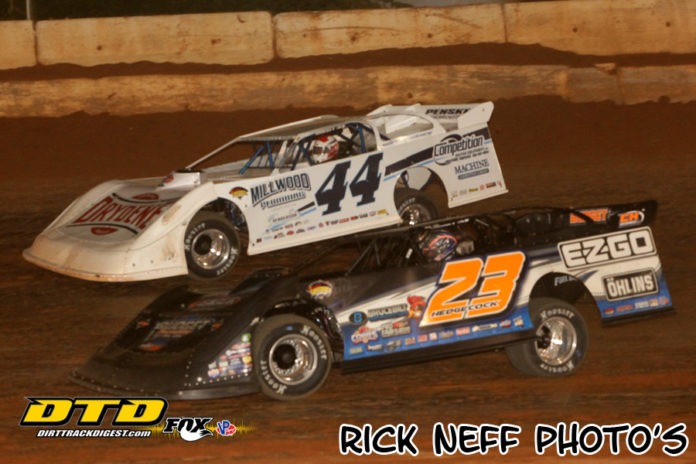 Chris Madden and Cory Hedgecock would bring the field to the green flag to begin the main event, with Hedgecock edging past Madden to secure the race lead, with Dale McDowell, Ross Bailes, and Brandon Overton trailing Madden. The front duo of Hedgecock and Madden would quickly put some race track between themselves and third-place running McDowell by lap ten and by lap twelve, Hedgecock and Madden would begin lapping slower cars, allowing Madden to close in on Hedgecock. Meanwhile, Overton would begin to challenge Bailes for the fourth position and Overton would take the spot away from Bailes on lap fifteen. Hedgecock and Madden would both work in and out of slower traffic in a timely manner, with both getting clear track on lap twenty-eight. Madden would immediately begin to challenge Hedgecock for the race lead and on lap thirty-one, Hedgecock would slide up the track somewhat entering turn one, allowing Madden to dive under Hedgecock, with the pair racing side-by-side for the lead until Madden would slide in front Hedgecock exiting turn four.

With Madden beginning to distance himself from Hedgecock, McDowell would charge and catch Hedgecock and McDowell would snag the runner-up slot on lap thirty-seven. Madden would continue to have to work in and out of slower traffic and McDowell would close the distance between himself and Madden in the closing laps of the event, but Madden would see the checkered flag first in the caution-free event and score the victory over McDowell, with Hedgecock holding off a fast-closing Overton to finish third, while Bailes would round out the top five finishers. The rest of the top-ten finishers would be Kyle Hardy, Donald McIntosh, Ryan King, Pearson Lee Williams, and Tyler Millwood.

The next event for the Schaeffer’s Oil Southern Nationals Series will be Saturday July 25, 2020, the series finale, the Ray Varner Ford 53 at Tazewell Speedway in Tazewell, Tenn. paying $10,053-to-win.