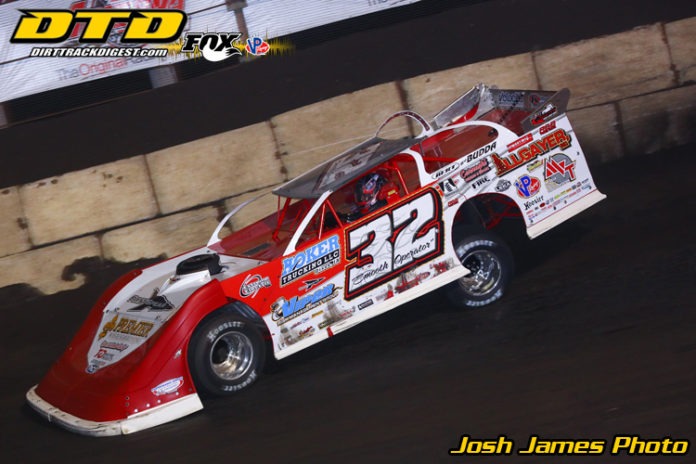 FAIRBURY, ILMARMAR – Leading the FALS Super Nationals Feature with less than 10 laps remaining, Bobby Pierce had a brief flashback to the final lap of the 2019 Prairie Dirt Classic as he sped around the high-banked quarter mile.

“I was just hoping that no one got a hell of a run like Brandon [Sheppard] did at the Prairie Dirt Classic,” Pierce recalled. “That’s what I was thinking of at the end, something like that happening. Going down the backstretch on the last lap, I was thinking, ‘well, do I cut down just to prevent something?’”

Pierce was maintaining a several-second advantage over second-running Frank Heckenast Jr. in the closing laps of Saturday’s MARS Super Late Model DIRTcar Series Feature at Fairbury Speedway when the memory of him getting passed in the final corner of the track’s biggest race all season popped into his head. Worried that it might happen again, having no idea who was behind him or how close they were, the young Illinoisan put the pedal down and refocused on the task at hand.

Back in reality, the Smooth Operator had little to worry about. He was over 2.5 seconds ahead with no problematic traffic in front of him. Pierce kept it glued to the high side and cruised to his 11th career MARS Late Model Feature win – one worth a cool $10,000.

Just like Thursday night at Farmer City, Pierce’s win on Saturday was just plain dominant. Coming from the pole and leading all 50 laps, Pierce jetted out to a commanding lead in the opening circuits; one he was never challenged for seriously until the race’s only restart on lap 37.

This stacked the field up behind him and put current MARS points leader Frank Heckenast Jr. right on his bumper. Heckenast was reeling Pierce in slightly before the yellow came out but didn’t seem to have the same charge after the restart.

“Frankie [Heckenast] was catching me for a minute, and I had to find another groove, another rhythm to hit there,” Pierce said. “Finally, I did, right before that caution came out. I was pretty nervous with 12 laps to go because I knew my tires were burning up.”

But in the end, things all went smoothly for the operator. His tires held up, his composure stayed with him and it all worked out. And what an incredible weekend it’s been for the Oakwood, IL-driver, winning two of the three MARS Late Model races with a runner-up finish in the other.

On a normal Saturday night at Fairbury Speedway, the local DIRTcar UMP Modified regulars are racing for $1,500 and points in the FALS Cup track championship. But the FALS Super Nationals boasts a $10,000 top prize, and it had the car count and racing quality to match.

A grand total of 80 UMP Modifieds showed up to FALS Saturday night, and all were zeroed-in to beat one man – Nick Hoffman.

Unfortunately for all 79 other drivers, Hoffman brought his A-game again, taking advantage of an incident with the early race leaders and outrunning his opponents in the final laps as he cruised to the $10,000 top prize and second-consecutive Summit Racing Equipment American Modified Series Feature win in two nights.

Hoffman started third and bided his time in the opening circuits of the 50-lap Feature behind leaders Bob Pohlman, Dawson Cook and Curt Spalding. Cook made the pass for the lead on Lap 5 and appeared to be a worthy competitor for the win before a very costly mistake bit him getting into Turn 1 on Lap 12.

Cook looped it heading into Turn 1 on the top side and met Mike Harrison, who was barreling through at full-speed and slammed into him, causing serious damage to both rides.

This handed the lead over to none other than The Thrill from Mooresville with 39 laps left. All of which he led, but not without a strong challenge from behind by Allen Weisser.

Weisser sat comfortably in the runner-up spot for the back half of the race before challenging Hoffman in lapped traffic with three laps to go.

“[Weisser] showed me a nose there coming to the white and I was able to shut him down into Turn 1 and make the next lap,” Hoffman said.

The last-laps battle for 10-grand was also done while deep in lapped traffic, making it all that much more exciting. It held Hoffman up a bit and allowed Weisser to close, but Hoffman was able to hold him off for the win unscathed.

“[Mark] Lamont at the end – I wasn’t sure which direction he was gonna go. He was kinda arching the corners pretty hard, so I wasn’t really sure. That allowed Allen [Weisser] to get all the way to me. Otherwise, I felt I had a big enough lead where I could have rolled right around there,” Hoffman said of the battle with Weisser.