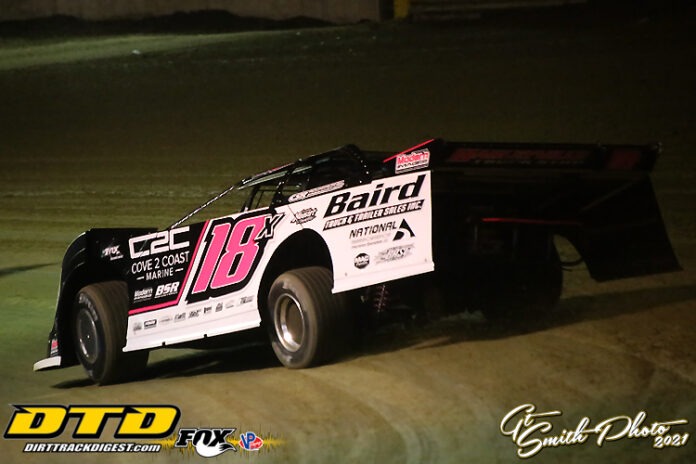 Page, of Douglasville, GA, led all 25 laps en route to his first victory in the event, snapping Bronson’s three-race win streak that be built in last year by sweeping the weekend and winning all three Pro Late Model Features and clinching the overall event championship.

A big move at the drop of the opening green flag really set Page out front quickly and gave him the advantage he needed over his competition. After redrawing sixth upon winning his Heat Race earlier in the evening, Page came out of Turn 4 considerably lower than the two cars in front of him on the original start and zoomed into third-place, full-bore into Turn 1. By the time he entered Turn 3, Page was the race leader.

The +5-spot differential in one lap made for quite an exciting sequence of passes, showing off the alive-and-well strength of a new power plant under the hood of 2003 MasterSbilt Race Cars chassis that Page used in his runner-up finish in this event last year.

“It’s a new motor, a Matt Bishop racing engine, a local guy around where we live, and that thing ran better than anything I’ve ever drove Crate-wise. And for an old MasterSbilt, that thing will get around the racetrack as good as anything,” Page told DIRTVision pit reporter Ruben Mireles in Victory Lane.

Beyond a few restarts in the second half of the race, not much else gave Page a serious challenge for the top spot. Bronson, however, was stopped just a bit short of his quest to continue his winning streak.

After winning the World of Outlaws Morton Buildings Late Model Series Feature just one hour before, Bronson hopped into his Pro Late Model and went from the pole but did not look as strong as he did with the Outlaws.

Bronson had faded back to sixth at one point but was able to rebound on the late restarts and lock up a fourth-place finish.

One of the race’s biggest highlights outside of the Page-Bronson storylines was the climb of young Tennessean Mack McCarter. He and his #51 came all the way from 19th to finish second in the Feature. McCarter had passed 15 cars in 10 laps and made the most of his time in the podium, even making up a little distance on leader Page in the closing circuits.

But there just was no catching Page and his #18x. His start was just too great, and the car was just too stable for any worthy challengers.

“I just tried to do something; to go where they couldn’t,” Page said. “The car just took off immediately. Sometimes doing whatever they don’t do is the right thing to do, but sometimes it’ll kick you in the butt. But it worked out tonight.”

Magic Man Mark Whitener crossed the stripe in third after a solid run inside the top-six the entire distance. Driving for Dale Mosley Racing this weekend, he really had a handle on his Pro Late Model ride, setting a new personal-best finish in the event.