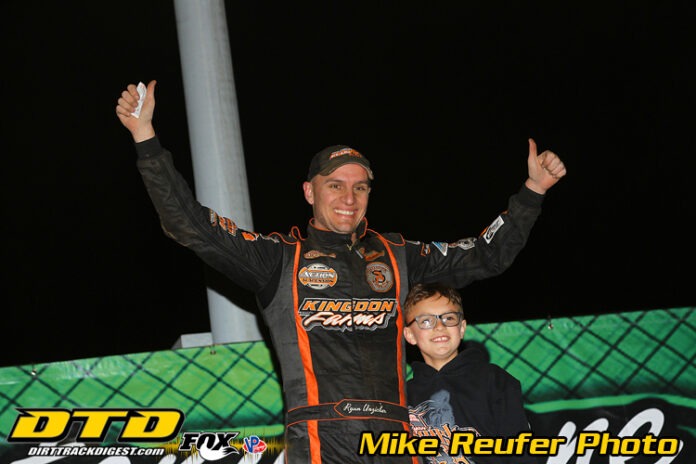 LASALLE, IL – In a great short-track battle through lapped traffic Friday night, The El Paso Express was the fastest train on the track.

Ryan Unzicker, of El Paso, IL, made the right moves in traffic and held off a hungry Brian Shirley and Tanner English for over 25 laps to score the Feature win in Friday’s Thaw Brawl preliminary night of action with the MARS Racing Series at LaSalle Speedway.

“Any time you can beat English and Shirley, that’s something that we need to be proud of because those are two top-notch teams,” Unzicker said.

Unzicker, Shirley and English were the three cars to beat all night long – top three in Qualifying, three Heat Race winners and first three on the starting grid. At the drop of the green, they each jumped out front and began their 30-lap throwdown on the fast quarter-mile.

English, of Benton, KY, led the first two circuits from the pole before Unzicker found some great grip on the very bottom lane and beat English to the line on Lap 3 before the caution came out.

Shortly after the ensuing restart, Shirley, of Chatham, IL, made the move for second around English and got a full head of steam on the top side as he charged after leader Unzicker. It wasn’t until he realized his eyes were deceiving him that Unzicker felt Shirley’s charge from behind.

“We got to playing around with the lapped traffic people, and I thought I had a decent lead, five-or-six car lengths or so,” Unzicker said. “[Turns out] I was looking at the wrong darn stick guy.”

“I was riding pretty comfortable for a little bit, and I saw a nose pop into the corner of my eye when I looked over at a car. Then I tried to focus back on where my stick guy was and he had the sticks closed, so I was like ‘oh, s*** he’s right here!’”

With some big momentum from his drive out of Turn 2, Shirley dove deep under Unizcker into Turn 3 and threw a big slide job to take the lead, but Unzicker was steady and crossed back underneath Shirley’s #3s to regain the spot at the stripe.

“I got that run in 1 and 2, and I just went in too hard,” Shirley said. “The problem was I didn’t think [Unzicker] could see me if I would’ve went in slow and he would’ve come down, so I went in too hard and slid up.

“If I could’ve passed him, I just should’ve whoa-ed the brakes and stayed on the bottom there, but I just pushed up enough where he could run back by us.”

Unzicker kept Shirley at bay until the final laps set in. With six-to-go, Unzicker caught the tail end of the field and was forced to make some quick and risky decisions with Shirley now right on his bumper.

With cars both high and low, Unzicker chose the bottom lane in Turns 3-4 to get by two slower cars, then pushed up to the top in Turns 1-2, leaving the door open for Shirley down low. However, he was unable to capitalize.

“It left a lane open because they guy had actually pushed [Unzicker] up, but I had pushed in 1 and 2 and it just left too much gap there, so I couldn’t make a move on him,” Shirley said.

Now with only a single slower car ahead, Unzicker overtook him quickly and drove away from Shirley’s grasp to the $3,000 victory – the fourth of his MARS career.

“The car was really balanced to where I could go top and bottom, really just put the car wherever I needed to. I think that’s what won me the race,” he said.

English crossed the line in third after holding off Jeremiah Hurst in fourth and Jason Feger fifth. Feger had started fourth before falling back to seventh and made a nice recovery to seal the top-five. Garrett Alberson, of Las Cruces, NM, made a terrific charge through the field to finish seventh after riding as far back as 15th in the opening laps.

The MARS Racing Series action continues from the 10th annual Thaw Brawl at LaSalle Speedway on Saturday, May 8, with the 60-lap, $12,000-to-win finale. Grandstand gates open at 3pm, Hot Laps are scheduled for 6pm.