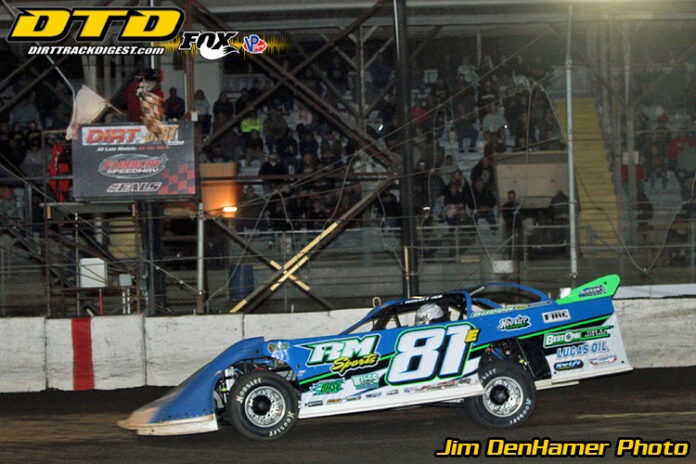 FAIRBURY, IL – May 15, 2021 – Tanner English knows that if he wants to be a DIRTcar national champion, he has to win at some of the country’s most popular DIRTcar-sanctioned facilities.

On Saturday night, he did just that, scoring his first career victory at Fairbury Speedway in the MARS Racing Series’ Spring Showcase.

“It’s good to finally get one here,” English said. “I’ve been close a few times.”

His road to victory at the quarter-mile bullring didn’t come easy, having to hold off both three-time DIRTcar Late Model national champions Dennis Erb Jr., of Carpentersville, IL, and Brian Shirley, of Chatham, IL, in the closing laps to pick up the $15,000 victory.

English, of Benton, KY, redrew the pole after winning his Heat Race and took off with plenty of speed at the drop of the green, opening up a nice advantage over the field in the opening laps. But it wasn’t until after a quick restart by Shirley after a Lap-15 caution that he was tested for the top spot.


Shirley was getting tremendous drive on the bottom lane in the corners, allowing him to reel-in English and pull up alongside him several times over the following 15 circuits. Side-by-side the two raced for multiple laps until Shirley was able to muscle ahead on Lap 31.

But Shirley’s lead didn’t hold for long. He maneuvered by the first set of slower cars without much issue but was forced to move off the bottom for the next pack, throwing him a curveball that ultimately cost him the lead.

“When I was in the lead and got the lead, it was like the car was underneath me, it was rolling good,” Shirley said. “With about eight-to-go, I don’t know for sure, but it felt like the right-rear started sliding on me a little bit.”

English hadn’t just settled for second once Shirley passed him for the lead – he cracked the whip and got right back on his bumper, waiting to capitalize when Shirley slipped-up in traffic.

“He left me plenty of room, and when he got by me, he kinda moved around and it opened up the door for me to make a move on him,” English said. “He started getting tight a little bit. It was just pretty awesome, a great race.”

English slipped the lead away from Shirley on the inside as they came around to complete Lap 40. Meanwhile, frontrunner Erb Jr. was moving through traffic well, glued to the bottom, and had his sights on the top-two as the race neared the home stretch.

With a fading Shirley in front of him, Erb ducked under the Bob Cullen Racing #3s and grabbed second with eight laps remaining. Sitting just under a second back from leader English, Erb put the pedal down and reached English’s rear bumper in just three laps.

But in the end, it was too little, too late. English was able to roll the middle and escape Erb’s clutches to win his 15th career MARS Racing Series event.

“I kinda set up for a little bit longer runs, and the racetrack didn’t clean-up as much as I thought it was going to. We just came up a little short in the end,” Erb said.

English spent a great deal of time making the middle groove work, which ultimately served as his getaway car with Erb breathing down his neck.

“It was just where I could carry momentum and not buzz my tires,” English said. “The top, I felt like I was gonna wear my tire out too quick, so I knew I needed to stay off that. I couldn’t really hang the bottom, so that was just kinda where I ended up.”

Now with plans to chase a national points championship and the DIRTcar Summer Nationals title this year, English appears to be coming into the zone at just the right time.

“We’re just on a roll,” English said. “Everywhere we go, it just seems like we qualify good, race good and run a Feature good. So, as long as we can keep finishing top-three, top-five, we’ll be in good shape.”

Erb crossed the stripe in second, just under a half-second behind English. Shirley was able to hang on for third but knew his car could’ve been better in traffic.

“If I would’ve had a better car like I did earlier in the race, I was able to get around those guys,” Shirley said. “When the car went away, I wasn’t hitting my marks the way that I wanted to because I had to start changing my entry into the corner.”

The MARS Racing Series is back in action next Fri-Sat night, May 21-22, at Kankakee County Speedway and Shadyhill Speedway – both $5,000-to-win races.