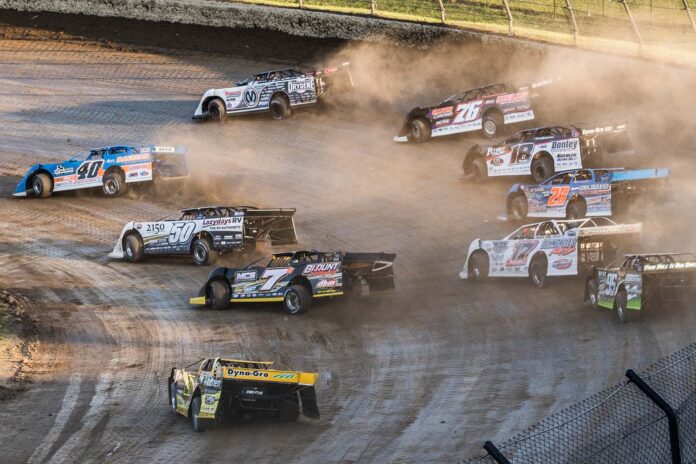 ROSSBURG, OH – Two Dirt Late Model Dreams in one week are now reality as the best DIRTcar Late Model drivers in the nation make their first of two annual pilgrimages to the hallowed grounds of Eldora Speedway to compete in the 26th and 27th Dream crown jewel events this Wed-Sat, Jun 9-12.

With nearly $800,000 in total purse money up for grabs over all four nights, including $273,000 in winner’s shares alone, the sport’s biggest stars are scheduled to compete in front of a non-capacity-restricted Eldora grandstand for the first time in over 21 months.

Wednesday and Friday nights will serve as the lone preliminary nights, featuring twin 25-lap, $10,000-to-win Feature events to set the Heat Race lineups for Thursday and Saturday night’s Dream main events. $127,000 goes to the winner of the 27th Dream on Thursday, $126,000 to the 26th winner on Saturday.

WIN AND YOU’RE IN – Dream format news broke last Friday with Eldora announcing that each of the B-Scramble winners will now transfer directly into the Feature events on Thursday and Saturday nights.

The B-Scramble races, contested immediately after the B-Main events before the Dream Features, were originally five-lap, $1,500-to-win dashes for any non-transfer car remaining on the track after their B-Main. This year, the winner will tag the rear of the main event field and have a chance to win the big money.

WHAT KRYPTONITE? – Jonathan Davenport, of Blairsville, GA, is Eldora’s most recent Late Model marquee event winner, taking the checkers in the World 100 substitute Intercontinental Classic last September, and again comes into the week as a double Dream favorite.

Superman is currently riding the momentum wave of a big weekend in West Virginia, sweeping the Super Late Model events at West Virginia Motor Speedway to collect a grand total $35,000 in winnings. While the track was a semi-banked 5/8-mile, compared to Eldora’s 24 degrees of banking in the turns, the similar speeds he faced down the straightaways were a nice bit of preparation before beginning his high-speed hunt for a second Dream title this week.

SPRINT CAR STAR – Bursting on to the Dirt Late Model scene in August of last year, in the midst of what will be forever known as one of the most successful seasons in dirt track racing history, Kyle Larson has since become one of the biggest threats to win any given Late Model event across the nation.

Larson, of Elk Grove, CA, has mastered Eldora in a Sprint Car multiple times over his career, but never once competed at the track in a Late Model. That is, until this Wednesday, when he’ll climb back behind the wheel of the K&L Rumley Enterprises #6 Longhorn Chassis, chasing a $10,000 victory in one of two 25-lap preliminary Features.

Despite having only a handful of Dirt Late Model starts, Larson will enter the event as one of the favorites. His most recent Late Model start on a half-mile came back in March at the dirt-covered Bristol Motor Speedway, where he led laps and finished second to winner Jonathan Davenport. Crew chief and car owner Kevin Rumley, who took Davenport to Victory Lane at both of Eldora’s crown jewels in 2015, will once again be in his corner, which makes 2021 the team’s best shot at seeing Eldora Victory Lane in a crown jewel event since their 2015 triumphs.

D-SHEPP – The defending Dream champion will take to The Big E this week for his first-ever Eldora crown jewel title defense.

Brandon Sheppard, of New Berlin, IL, gave Rocket1 Racing team owner Mark Richards his first career Eldora crown jewel event victory in the most recent running of the Dirt Late Model Dream back in June 2019. Last year’s Dirt Late Model Stream Invitational was technically not considered to be a Dream, thus making him the defending champion coming into the weekend.

The 28-year-old currently leads World of Outlaws Morton Buildings Late Model Series points and would love nothing more than to claim a $126,000 and/or $127,000 check for he and the team – one that would certainly brighten up a season in which they’ve only seen Victory Lane an unusually low two times so far.

SMALL TRAILER, BIG DREAM – Many local and regional Late Model teams throughout the country would trade a lot for an opportunity to compete in even one Dirt Late Model Dream. Last week, Ryan Missler was granted the opportunity to race in two.

The five-time Attica Raceway Park track champion from Bellevue, OH, won the fan-vote contest to send one local/regional Late Model racer who had never previously entered the event to this year’s double Dream with a big prize package that included Hoosier Racing Tires and fuel certificates, a new set of seatbelts and even his own custom t-shirts for the occasion.

OFF THE CHAIN – It’s only June, and Kyle Strickler has already had one whirlwind of a season.

After kicking off his 2021 campaign with two big victories versus the Outlaws at Volusia, Strickler recently vacated his ride at Hope, IN-based PCC Motorsports and cashed in on an opportunity to work with one of the sport’s all-time greats, Scott Bloomquist.

The 37-year-old from Mooresville, NC, linked-up with the Dirt Late Model Hall of Famer for last month’s World of Outlaws weekend at Port Royal Speedway and is slated to bring his Team Zero Race Cars ride into Eldora this week – a place where Bloomquist himself has won an all-time high 12 crown jewel events.

Strickler won a Stream Invitational preliminary Feature and nearly captured the victory in the Intercontinental Classic last year if it weren’t for a blown tire in the final laps. With Bloomquist in his corner this week, Strickler is set up for his biggest chance to finally claim his first Late Model crown jewel in front of a full-capacity crowd.