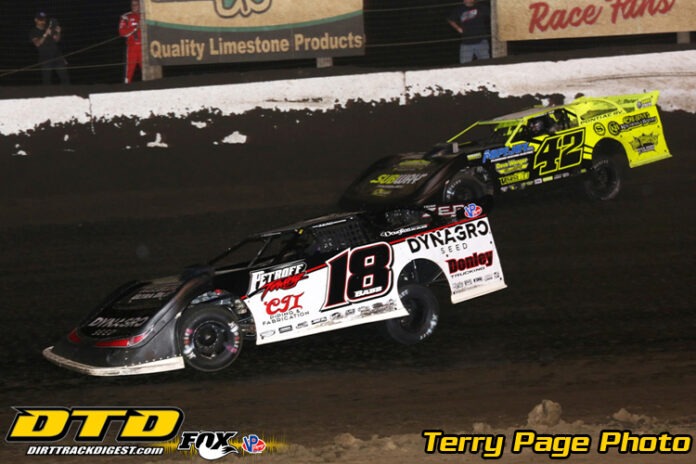 FARMER CITY, IL – Ever since winning #99 three weeks ago, the Dirt Late Model world had been waiting for the moment when one of its biggest icons would finally achieve one of the greatest career accomplishments in the sport’s history. And now, the wait is over.

With his friends, family and his faithful fanbase all in attendance Friday night at Farmer City Raceway, Babb drove his Dyna-Gro Team Zero Race Cars #18 to victory against a strong field of frontrunners and denied them all to collect one of his most historic victories and the $10,000 grand prize.

“I knew this week right here – we had a really good shot at getting us a win. This place… we’ve always considered it one of our favorite places to race, and it’s always been really good to me,” Babb, of Moweaqua, IL, said.

Looking back on all the years he’s spent in the sport and the highlights along the way, from his very first Summer Nationals win in June 1999 in Haubstadt, IN, to his 99th just three weeks ago in a thriller at FALS, Babb said he knew his passion for the sport was there right away but never imagined the kind of success his career would have at this point.


“I knew that’s what I wanted to do. I knew I really enjoyed racing and I felt like I could run with ‘em if we had the sponsors and the money to continue doing it. We’ve been blessed to have a lot of great people behind us this entire time,” Babb said.

He had plenty of competition on his hands over the 40-lap event, coming from third on the starting grid. McKay Wenger jumped out to the early lead from the pole and led the first 23 laps, keeping a strong pace ahead of outside polesitter Garrett Alberson and Babb in third.

The deeper they climbed into lapped traffic, the tighter the gaps got. Babb was able to get around Alberson at the halfway point and immediately set his sights on Wenger.

On Lap 24, Babb got a great run off of Turn 2 and charged into Turn 3 with a full head of steam. He dove underneath Wenger and slid up in front of him at the exit of Turn 4 to grab the lead.

From that point forward, it became Babb’s race to lose. He opened up a sizable advantage over Wenger in traffic and rode it all the way back to the finish line for his second Summer Nationals Feature win of the season.

His historic victory places him in a tie with the one and only six-time champion Billy Moyer for most Feature wins on the all-time wins list.

“Me and Billy have always raced really good together, and he was really somebody that we always looked up to. I drove for him for seven years, so we’ve got a lot of respect for him and a lot of time racing with him,” Babb said.

And now, the agony of anticipation has been put to rest. Thinking of all the great drivers he raced against over his decorated career, Babb has been grateful for all that he’s learned from them.

“It hasn’t sunk-in yet, but it will down the road, probably,” he said. “We’ve had a ton of great competition over the years to race against and a lot of people that were here before me that taught us a lot about this deal.”

For the third year in-a-row, Nick Hoffman has achieved a perfect season with the DIRTcar Summit Racing Equipment Modified Nationals, maxing-out his win total with his 12th victory in 12 starts Friday night at Farmer City Raceway.

Each driver’s best 12 finishes are taken into consideration for the overall points standings, and since Hoffman now has 12 wins, he’s received nearly the maximum number of points obtainable for any single driver.

The only ways he can increase his points total now is through bonus points, given for races with 26 or more cars in any given field, and by replacing the lower-point victories with more wins at higher car counts.

Once again, the three-time and defending champion led all 25 laps Friday night, putting him at a still-perfect 290-for-290 in consecutive Feature laps led.

Even with the big names in the house, Hoffman still denied them all. None of his opponents even got the opportunity to make a pass for the lead, as he was able to build on the jump out to the lead he got on the initial start.

Even the threat of rain in the area could not stop The Blue Deuce. The show was efficiently completed, and the rain held off until afterwards.

“Hats off to the track prep crew to get it in tonight,” Hoffman said. “My phone was wrong again, I guess. I thought we were clear until like 12 or 1 o’clock, and then they start rushing us.”

Regardless of the weather and track characteristics, Hoffman had one planned route to Victory Lane – the fastest one.

“Our racecar’s really good in any track condition right now, and we’re just having a hell of a lot of fun right now,” Hoffman said.