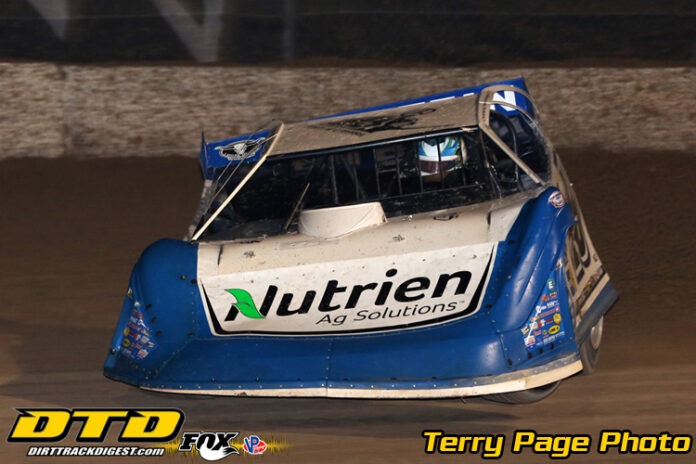 Davenport of Blairsville, Ga., started on the pole and jumped out to an early lead, one that he would retain for the entirety of the 40-lap event. Davenport was never truly challenged, as he piloted his No. 49 Super Late Model perfectly and stretched out his lead during every green flag run.

Davenport and Billy Moyer of Lake Havasu City, Ariz., brought the field to the green flag at the start of the race.

Davenport led the opening 12 laps of the race as Bobby Pierce of Oakwood, Ill., climbed his way from the fifth starting spot to second. Moyer brought out the caution on lap 13 as he had a right rear tire go flat. Pierce joined Moyer in the infield for a tire change of his own during the yellow.


Brandon Overton of Evans, Ga., charged to the second spot on the ensuing restart and came to within a second of Davenport for the lead just past the midway point of the race.

Following a lap-23 caution, Overton and Josh Richards of Shinnston, W.Va., swapped the second spot for a couple of laps, allowing Davenport to build a sizable advantage.

One final caution with 14 laps remaining gave Overton his best shot to make the pass for the win as he pulled even with Overton in turns 1 and 2.

Davenport fought off the challenge by Overton and continued on for the victory. Overton took second, Tim McCreadie of Watertown, N.Y., finished third with Pierce and Richards rounding out the top 5.

“I feel like I was pretty decent on a long run,” Davenport said after the race in Victory Lane. “I could slow up a little bit and save my tires in case someone was close to me.”

Davenport commended the track prep crew on the racing conditions as drivers had multiple grooves on which to pass all feature long.

“The track guys have done an excellent job. From where I was it was really good. I’ll go back and watch the video of (the race) and see what we can improve on.”

Davenport, Overton, Moyer and McCreadie picked up heat race victories, while Davenport and Moyer were the fastest qualifiers in their qualifying sessions to start the night.

In SportMods and Mod Lites, three nights of qualifying races set the tone for the first two IMCA championship features at the Duel in the Desert Friday night.

Forster of Bakersfield, Calif., and Randy Bryan of Ames, Iowa, led the field to the green in the 20-lap STARS Mod Lite championship feature.

Following a caution on the initial start, Forster jumped out to the lead on the restart and built a seven-second lead in the next 17 laps, all running green-flag. A caution with three laps to go gave Riley Clem, also out of Bakersfield, Calif., a shot at the win as he moved from third to second on the restart.

Forster held off Clem in the final two laps to win the race. Clem failed post-race inspection and was relegated to the 15th-and-final finishing position. Randy Bryan moved from third to second in the finishing order as a result.

In the IMCA SportMod championship feature, Jorddon Braaten of Central Point, Ore., joined Anderson on the front row. Anderson had built a four second lead in the first 11 laps of the race, but his advantage was erased by the first caution of the main event.

A seven-car pileup on the restart took out a few contenders including Chase Alves of Casa Grande, Ariz., and Brett Berry of Hays, Kan. Alves had climbed from 10th to 4th place.

Anderson remained unchallenged in the final 10 laps of the race, leading wire-to-wire for the victory.