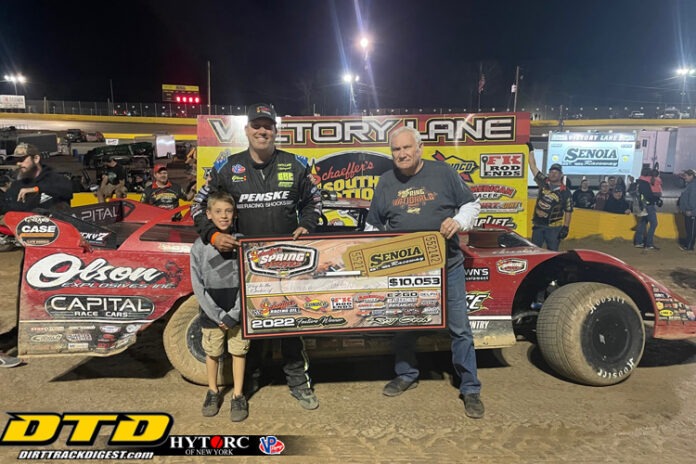 SENOIA, GA – Racing in front of a large crowd on Saturday at Senoia Raceway, Shane Clanton, of nearby Zebulon, Georgia, dominated the Schaeffer’s Oil Spring Nationals feature to claim the $10,053 top prize! In the second round of the twelve race miniseries, Shane started the evening by posting the fifth quickest lap overall during the FK Rod Ends qualifying session before driving his Capital racecar to a heat race triumph. After rolling off from the outside of the front row in the 53-lap headliner, Shane blasted past polesitter Chris Madden with an outside move on the second circuit to grab the point and never looked back – ultimately lapping up to the fifth position. Shane’s dominating performance at the Senoia, Georgia oval marked his first career Spring Nationals victory.

Finishing 3.232 seconds behind Clanton at the checkers was runner-up Dylan Knowles, who started in the fifth spot. For the second straight night, Floridian Mark Whitener steered the Big Frog Motorsports mount to a third place podium effort after picking off six competitors. Michael Page, who now finds himself tied with Whitener for the series point lead, came home in the fourth position while Sam Seawright was the final driver on the lead lap in fifth.

Only two yellow flags halted the action on the gray gumbo during the 53-lapper at the Atlanta-area facility. Second-running Chris Madden slowed and retired with apparent mechanical troubles on lap 15 to draw the first caution. The second and final yellow came on lap 49 when Ashton Winger, who was also running in the second spot, suffered a flat left rear tire and ultimately retired with body damage to his Gambler Transport Motorsports ride.

“We have worked our tails off at Capital Race Cars to build a new race car,” exclaimed Clanton in Senoia Raceway victory lane. “We didn’t show much in Florida during Speedweeks, but we learned a lot. Tonight, we made the right adjustments at the right time and got the job done. I have to thank the Bruening family for all of their support, along with all of our great sponsors that are involved with this Skyline Motorsports race team!”

A 32 car field assembled tonight at Senoia Raceway for the second round of the Schaeffer’s Oil Spring Nationals Series. Chris Madden earned Fast Time honors during FK Rod Ends qualifying with his fast lap of 13.586 seconds. The trio of heat races were won by Chris Madden, Shane Clanton, and Ashton Winger, while the B-Main was captured by Jimmy Sharpe, Jr. Series provisionals were awarded to Payton Freeman and Jamie Oliver, while Ryan Rackley utilized an emergency provisional to start shotgun on the feature grid.

Next up for the Schaeffer’s Oil Spring Nationals tour will be a visit to Tri-County Race Track in Brasstown, North Carolina on Friday night, March 18. The “Tiger Pit” is scheduled to host its fifth series race and a $4,053 winner’s check will be up for grabs at the 1/4-mile oval that is also promoted by Ray Cook. Previous Spring Nationals victors include: Casey Roberts (’13), Mike Marlar (’14), Donald McIntosh (’19), and David Payne (’21). Additional information on Tri-County Race Track can be found by logging onto www.TriCountyRaceTrack.net.