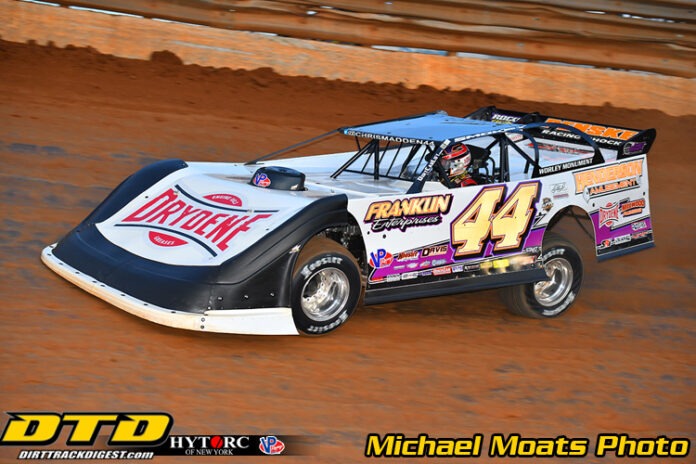 TAZEWELL, TN – Continuing his red-hot start to the 2022 racing season, Chris Madden wired the feature field on Saturday night at Tazewell Speedway to bag the $21,000 paycheck in the 2nd edition of the ‘Lil Bill Corum Memorial!’ After topping Group B in time trials at the bad-fast Tazewell, Tennessee facility, Chris won his heat race in preliminary action to earn the outside of the front row for the start of the 75-lap headliner, which was co-sanctioned by the both the Schaeffer’s Oil Spring Nationals Series and the Iron-Man Late Model Series. The Gray Court, South Carolina hotshoe then nabbed the point at the drop of the green flag over last night’s winner and polesitter Brandon Overton and never relinquished the lead in winning by a 0.885 second margin in front of an overflow hillside crowd.

Finishing behind Madden’s #44 machine was runner-up Ricky Weiss, who was also a heat race winner and started the ‘Lil Bill Corum Memorial’ from the outside of the second row. The Headingley, Manitoba driver mounted a serious charge in the late stages of the contest, but a lap 73 caution flag stymied his bid for a second career Spring Nationals victory and forced him to settle for a strong second place finish. Dale McDowell, of Chickamauga, Georgia, worked his way past four competitors to join Madden and Weiss on the podium in third. Dirt Late Model Hall of Famer Scott Bloomquist thrilled his home state fan base by climbing six spots to finish fourth, while Dakotah Knuckles rounded out the top five by streaking past seven racecars during the 75-lap affair.

A total of six caution flags slowed the action around the high-banked, 1/3-mile oval. Michael Chilton slowed with a flat tire on lap 15 to draw the first yellow flag. Ryan King then stopped his Warrior House Car in turn two on lap 16 when his engine compartment caught fire. A multi-car wreck was then the cause of the third caution on a subsequent lap 16 restart. Stacy Boles then spun to the inside of the track to draw a yellow on lap 29 before Ross Bailes slowed with a flat tire on lap 45. The sixth and final caution came on the 73rd circuit when Brandon Overton gave up the third spot – due to a flat tire – and retired in the fifteenth finishing position.

“I think Ricky (Weiss) had a little different tire combination than we had and he was able to get down there in that mud ring,” quoted Madden following his fifth overall win already in 2022. “I think he was pretty good around that bottom, but we were good all race long and were able to get the job done. I have to thank all of my guys that work so hard on this thing and all of my sponsors. Looking forward to getting back home and spending a great Easter with my family tomorrow. I have a great team and a great bunch of guys with me and we’re just doing what we need to do to win right now!”

With no rest for the wicked, the Schaeffer’s Oil Spring Nationals Series will jump right back into action from April 21-23 in a tripleheader in the states of North Carolina and Tennessee. Things will kick off this Thursday night with a rain-postponed visit to Tri-County Race Track in Brasstown, North Carolina for a $4,053 to win throwdown. Another $4,053 to win program will then be held on Friday evening at Crossville Speedway in Crossville, Tennessee. The #SpringNationals triple shot will then wrap up in a big way on Saturday at Clarksville Speedway in Clarksville, Tennessee, as a $10,053 top prize will be up for grabs in round seven of the miniseries. Additional information on these races can be found online by visiting www.TriCountyRaceTrack.net, www.CrossvilleSpeedway.net, and www.ClarksvilleSpeedway.com.