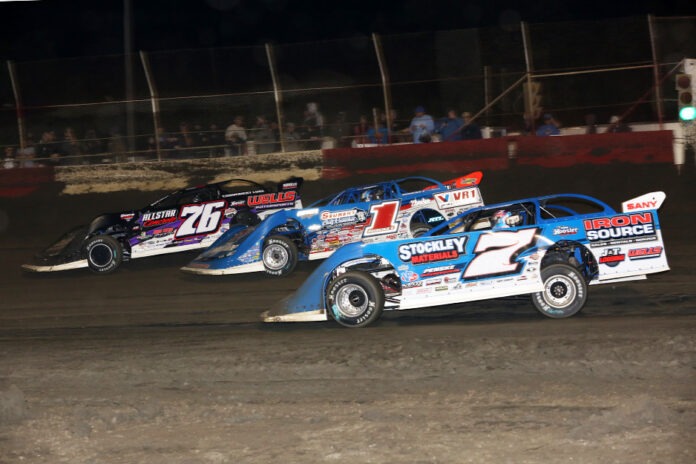 BATAVIA, OH – On May 26th-28th the Lucas Oil Late Model Dirt Series and the Lucas Oil Midwest Late model Racing Association (MLRA) will co-sanction the 30th edition of the Lucas Oil Show-Me 100 presented by ProtectTheHarvest.com, with a record purse. This Crown Jewel event will pay a record $50,000 to the winner on Saturday night, with a total purse of over $233,000 over the three days.

In Wheatland, MO, a town with a population of under 400, lies an immaculate 3/8-mile oval facility known as “The Diamond of Dirt Tracks”. This weekend when the nation’s top dirt late model drivers invade Lucas Oil Speedway, the transient population greatly increases.

The action on Friday, May 27th will pay tribute to Don and Billie Gibson, former promoters of West Plains Motor Speedway and founders of the Show-Me 100. The activities will include a complete program of: Allstar Performance Time Trials, Heat Races, B-Mains, and a 40-lap, $6,000-to-win, $600-to-start main event.

Drivers will earn points in each of the two preliminary nights; those points combined will determine the line-ups for Saturday night’s $50,000-to-win, $2,000-to-start finale.

The Cedar Creek Beef Jerky USRA Modifieds will be featured as the support class each night. Their activities on Thursday and Friday, May 26th-27th will feature a complete program of: Time Trials, Heat Races, B-Mains, and a 20-lap, $750-to-win main event each night.

On Saturday night, consolation events for the Lucas Oil Late Models and the USRA Modifieds will be held, plus the Midwest Sheet Metal Show-Me Challenge. The Lucas Oil Show-Me 100 main event will follow the Midwest Sheet Metal Show-Me Challenge on Saturday night. The USRA Modifieds will cap off the weekend action with their $1,500-to-win main event.

The Nutrien Ag Solutions Pre-Race Ceremonies-presented by Missouri Division of Tourism will include introducing the Grand Marshal of the 30th Annual Show-Me 100, country music star and RCA recording artist, Aaron Tippin. Action-packed racing isn’t the only thing bringing excitement to fans in this unforgettable weekend, opening ceremonies are sure to leave everyone talking.

In 2021 Tim McCreadie took the lead on the first lap and blazed his way to win the Cowboy Classic (which was postponed from Thursday) on Friday Night at Lucas Oil Speedway. Josh Richards came from the sixth starting spot to pass Brian Shirley on the sixth lap to dominate Friday Night’s Tribute to Don and Billie Gibson. It was Hudson O’Neal though that picked up the biggest win of his racing career (at that time) in the 29th Annual Lucas Oil Show-Me 100 as the fifth and final leader of the 100-lap event.