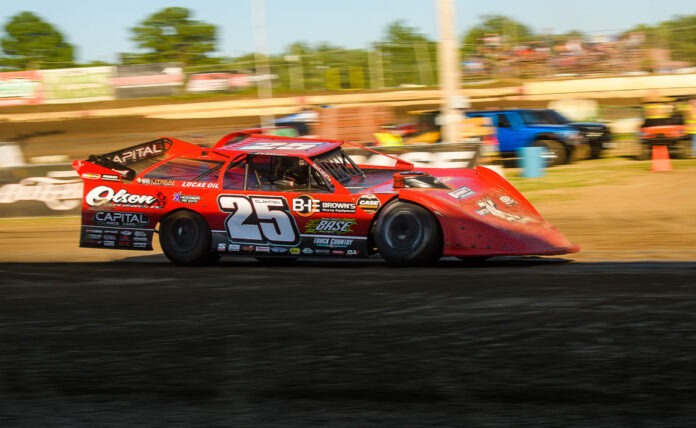 GRAND FORKS, ND – Shane Clanton’s resume in dirt Late Model racing is long and distinguished. That’s why the Zebulon, GA driver, can seize any opportunity before him, even if it means changing plans mid-season.

As The Most Powerful Late Models on the Planet power into River Cities Speedway on July 15, the “Georgia Bulldog” hopes to hold onto that momentum. He stated the most significant reason his team has taken a step forward is the work done before they get to the track.

“I think we were prepared,” Clanton said. “We were ready to do it, and when we got here, we were gung-ho.”

The momentum in May and early June with the World of Outlaws CASE Late Models also helped him score a $40,000 victory at Belleville Speedway’s 1/4-mile track. It was a massive win for Clanton’s team, especially in the current economy.

“All of us need a lot of money to go up and down the road, so any kind of win that you get, especially a big one, it helps out tremendously,” Clanton said. “The morale is up, [Federated Auto Parts Raceway at I-55] hurt us a little bit, but hopefully, we can translate what we did a couple of weeks ago.”

Like many teams in 2022, Skyline Motorsports deals with changes, including new crew members.

Wyatt Eichelberger joined Clanton as his crew chief after DIRTcar Nationals in February—bringing more national tour experience to the team. He chased the World of Outlaws CASE late Models tour with 2021 Rookie of the Year Tyler Bruening, Clanton’s teammate.

The 2015 Series champion stated Eichelberger’s importance to his team since making the switch has been invaluable.

When traveling to a World of Outlaws race, you’ll see not only Shane Clanton hanging around the pit area. Shane’s wife Michelle and their two kids are also at the track supporting him. His family is one of the reasons he decided to return to the Series, especially after seeing what’s on the schedule once Labor Day weekend arrives.

“I looked at the schedule, and I could be home eight more weeks than what I was over there,” Clanton said. “I got two little ones and a wife that needs me sometimes to be at home.

“Traveling is a big deal, and I’ve done this a long time, and you do get tired of the road. So, as much as I can stay home, the better off I’ll be.”

Clanton finds himself in a unique situation as the World of Outlaws CASE Late Models hit their summer swing in the Upper Midwest. While he’s too far behind to catch Dennis Erb Jr. for the driver’s title, he still has a chance to win the team points for Skyline Motorsports.

With Clanton taking over for Bruening, they’ve essentially shared duties as the full-time team for Skyline Motorsports, which is currently third in team points—170 points behind Erb.

“We definitely want to get more top fives and the championship is still available for the car owner,” Clanton said. “I’m doing all I can. I know Dennis [Erb] beat us pretty bad [Saturday] night, but all he has to have is two bad runs, and we’re back in it.

“I know we’re going to some good tracks that I normally run good at up in Grand Forks [River Cities Speedway] and them places, so we’re looking forward to it.”

Clanton hopes to pad his resume when the World of Outlaws CASE Late Models return to River Cities Speedway on Friday, July 15—a track he’s found success at, winning in 2017.  It’s another place the “Georgia Bulldog” can continue his stride toward a team championship for Skyline Motorsports.

Following the race at River Cities, the World of Outlaws will venture to I-94 Sure Step Speedway on Saturday, July 16, and then Red Cedar Speedway on July 17. For tickets to both, click here.