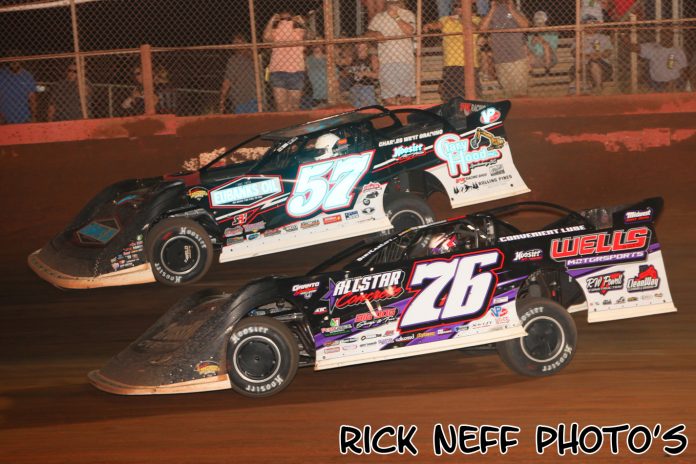 Once out front of the strong field, the popular driver known as “Big Sexy” drove away from the pack in winning by 3.112 seconds. Brandon’s 20th career Southern Nationals triumph was worth $10,053 to his Wells Motorsports team. Wil Herrington, who rolled off from the outside of the sixth row in the A-Main, blasted past ten competitors to finish an impressive runner-up at the Peach State oval. Zack Mitchell led the first 46 circuits before slipping back to the third spot to round out the podium. Eighth starting Jordy Nipper came home in the fourth position after vaulting to as high as second midrace, while ninth starting Michael Brown was the final car inside of the top five.

A total of seven caution flags slowed this year’s version of the ‘Rebel Yell.’ The initial start of the race was called back after a multicar incident involving Jensen Ford and Carson Ferguson took place. On lap 3, Dale Timms and John Henderson got together to bring out the yellow flag. Brad Basey then slowed on the track to draw a caution on lap 15, while Parker Martin and Johnny Pursley converged to draw another yellow on the restart. Chris Ferguson slowed with apparent nose damage on lap 19, while Jason Garver also slowed to get the attention of the flagman on lap 36. One final caution period then took place on the lap 36 restart, as Dirt Draft Rookie of the Year leader Will Roland slowed with a flat left rear tire.

“I was about to run third there,” exclaimed Overton in Schaeffer’s Oil Victory Lane. “I couldn’t get back around Jordy (Nipper). I chose the bottom on a restart and Jordy got me on the top and I was like – I’m gonna be stuck here for a little bit. Then, I seen it kind of rubbering up around the top and I knew I had to hurry up and get back up there. What a race there for the lead with (Zack) Mitchell, it was a lot of fun and I always enjoy racing here at Screven and with Ray’s tour.”

A total of 24 competitors showed up at Screven Motor Speedway in Sylvania, Georgia, for tonight’s annual ‘Rebel Yell,’ which marked the seventh round of Schaeffer’s Oil Southern Nationals Series action. Zack Mitchell topped the speed charts in qualifying by laying down a fast lap of 14.654 seconds prior to securing a heat race victory. The other two heat races were won by Chris Ferguson and Brandon Overton respectively.