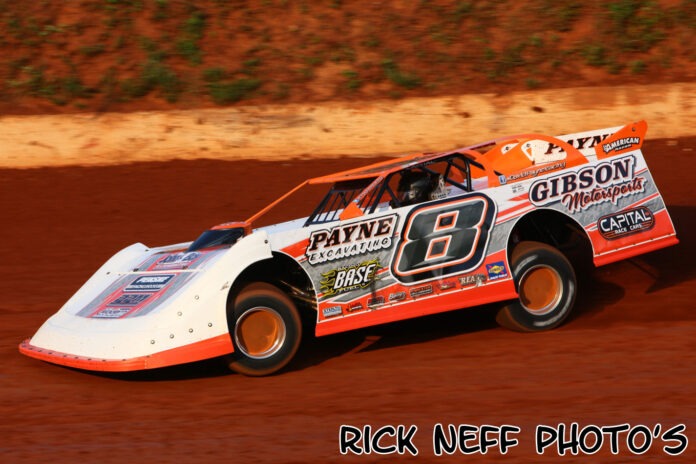 BRASSTOWN, NC – David Payne, of Murphy, North Carolina, emerged victorious on Thursday evening in a rain-shortened Schaeffer’s Oil Southern National Series show at Ray Cook’s Tri-County Race Track! David, who has won many special events and track titles in his career at the nearby Brasstown, North Carolina bullring, laid down the second quickest lap in Memory Lane Classic Car Museum qualifying to earn the outside of the front row for the 53-lap feature event. With inclement weather rolling into the area, David jumped out front of the 22-car field on the first circuit and was at the point when heavy rain poured down on the facility during a caution period after only 27 laps.

With the deluge, series and track personnel had no choice but to call the race official since it had reached the halfway mark and Payne was declared the winner of the $7,553 first place prize money. Finishing behind his #8 machine was a top five that included runner-up and winner of the last two series races Brandon Overton, fast qualifier and polesitter Payton Freeman, seventh starting Wil Herrington, and Davenport, Iowa invader Spencer Diercks.

A total of four yellow flags flew over the field during the shortened race prior to rain halting the action. The initial start of the contest was called back before a second caution flag on lap nine waved for a slowing Jensen Ford. A multi-car incident then took place on the following restart prior to Joe Denby winding up in the turn four wall working on lap 28. While track staff was removing Denby’s #27 mount from the racing surface, the skies opened up and the event was deemed official.

A field of 22 Super Late Model competitors converged at the track deemed as the “Tiger Pit” tonight for the $7,553 to win showdown. With the unsettling weather in the area, time trials solely set the starting grid for the scheduled 53-lapper. Payton Freeman, of Commerce, Georgia, earned the $150 bonus from Memory Lane Classic Car Museum for knocking down the quickest lap overall during qualifying with his fast time of 12.294 seconds.

The penultimate event of the 2022 Schaeffer’s Oil Southern Nationals Series will now take center stage on Friday night, July 29 at Boyd’s Speedway in Ringgold, Georgia. A $10,053 payday is up for grabs tomorrow evening at the Chattanooga-area oval. Previous tour winners at Boyd’s Speedway include: Randy Weaver (’14), Casey Roberts (’15), David Payne (’16), Brandon Overton (’17), Vic Hill (’18), and Sam Seawright (’21). Learn more about this race by clicking on www.BoydsSpeedway.com.