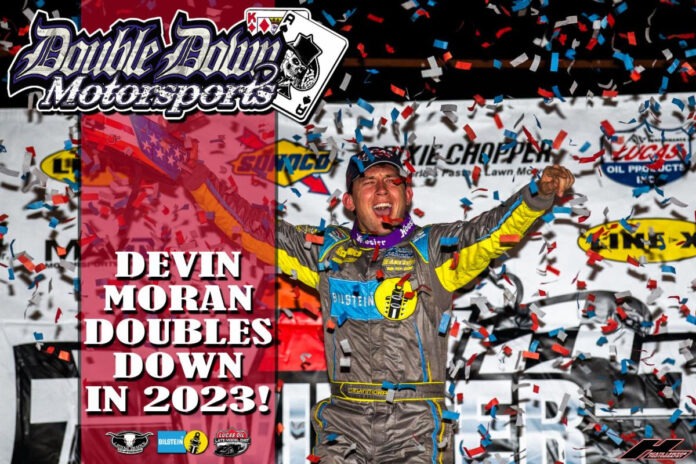 DRESDEN, OH- Devin Moran and Double Down Motorsports (DDM) team owner Roger Sellers have confirmed today that the two have paired for the upcoming 2023 racing season, which puts the twenty-eight-year-old driver in the seat of the coveted ride left vacant by a departing Hudson O’Neal.  Both parties enjoyed a successful 2022 campaign, as Devin (with Tye Twarog Racing) reached victory lane on ten occasions, while Double Down Motorsports accumulated eight feature wins with O’Neal and finished fourth in the final version of the Lucas Oil Late Model Dirt Series point standings.
The newly-formed pairing plans to compete full-time on the national tour in 2023 in hopes of capturing the Lucas Oil Late Model Dirt Series National Championship.  Devin, who will be making his return to full-time racing with the series for the first time since 2020, will be armed with a fleet of new Longhorn Chassis with full factory support from both the Trinity, North Carolina manufacturer and Bilstein Shocks.  The team will also be relocating and racing out of the shop of Devin’s Hall of Famer father Donnie Moran in Dresden, Ohio.
“I think it’s a great match between the two of us and I’m really excited for a great 2023 season and beyond,” quoted team owner Roger Sellers today.  “When Hudson (O’Neal) decided to pursue another opportunity I thought about stepping away from car ownership, but I took my time and didn’t let emotions get the better of me.  I have a lot invested in this sport and my passion to win big races and a Lucas Championship is greater than ever.  So when I decided to keep going, we talked to a lot of our sponsors and product people and their input helped guide our decision.  We had some great prospects that expressed their interest in driving for us, but at the end of the day, Devin is a great fit and checked all of the boxes!”
“Devin brings a lot to the table – he’s great with sponsors and on social media and everyone can see what kind of talent he possesses behind the wheel,” Sellers went on to say.  “He comes from a great family with a rich racing background and he’ll have the full support from me and my family.  I know he’s excited about racing out of his dad’s shop in Ohio.  When I was thinking about stepping away, Earl Pearson, Jr. had actually contacted me about leasing our race shop in Morristown, Tennessee to his Papich Racing team, so it all worked out perfectly that we could be accommodating to Devin and relocate our stuff to Dresden and help Earl out at the same time.”
For Devin, this was an opportunity that he simply couldn’t pass up.  “Like I said last week when the announcement was made that me and Tye (Twarog) were going our separate ways, I can’t thank him enough for furthering my racing career and getting me to this point,” exclaimed Moran via telephone.  “This is a situation (with Double Down Motorsports) that I’ve been looking for my entire career really.  To have the resources and equipment that Roger has in his arsenal and to be able to race out of dad’s shop is really just a dream come true.  I’m excited to be in Longhorn Chassis with Bilstein Shocks again next year and I think we are putting together all of the pieces to make a serious national championship run next season!”
Devin, who will most likely return to his roots and pilot a #99m entry in 2023, went on to say, “There is still a lot we have to figure out before next year including trying to find a crew chief willing to relocate to Ohio.  We have some great crew help already on board including my brother Wylie, but he will not be coming on full-time.  He has a good thing going with his own business right now, so we’ll see how much he can get away from it.  I’m just super excited to drive for Roger – he’s such an awesome guy – and I can’t wait until next year begins!”
A key piece to the puzzle to bring Moran to Double Down Motorsports was the involvement of Longhorn Chassis and Bilstein Shocks.  “I am absolutely thrilled to continue our relationship with Devin Moran and very excited to work with Mr. Sellars,” exclaimed Longhorn Chassis Managing Partner Steve Arpin this afternoon.  “Double Down Motorsports is one of the top Dirt Late Model teams in the country and for them to put their faith in our Longhorn cars just makes us want to work even harder for them.  Devin and the team will give us one more gun in the fight, you might say, to win big races and championships.  We will be working very closely with DDM to provide first class technical support led by Kevin Rumley and Matt Langston, while also gathering critical data and information from the team that will help all of our Longhorn Chassis customers.”
Devin Moran and Double Down Motorsports (DDM) will kick off their 2023 racing season during “Speedweeks” in Georgia and Florida during the months of January and February.  The team will concentrate mostly on Lucas Oil Late Model Dirt Series events, while also entering a majority of the crown jewel races across the country.  DDM will also continue to field a car for Roger’s son-in-law Robby Moses in Tennessee, who will once again compete in a limited slate of events regionally.
As soon as series and tracks release their schedules this off-season, a full tentative schedule for the team will be posted online at both www.DevinMoranRacing.com and www.DoubleDownMotorsports.net.  You can also connect with Devin across social media platforms on Facebook, Twitter, and Instagram @DevinMoran99.  Go shopping 24 hours a day / 7 days a week at www.ShopDevinMoran.com.
(Heath Lawson Photography) 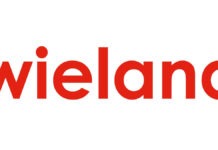