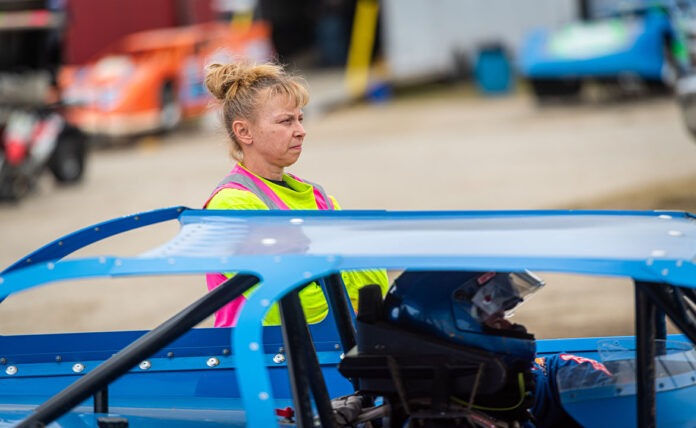 CONCORD, NC – When Heather Lyne walked into Dennis Erb Jr.’s race shop 21 years ago to join his race team, a single thought went through his head.

“I was like, really? What are you going to do?” Erb said. “She shows up in her dress clothes and everything wondering if I needed help, and that was really the first thing that popped into my mind.

“As we talked more and said she worked on her dad’s car, that she was mechanically inclined, and the things that she does at work. I was like, OK, we’ll give this a try and see what happens.”

What happened after that talk was the beginning of a successful partnership. The two have teamed up since 2001, leading to several high-profile accomplishments like the 2016 Dirt Late Model Dream and three consecutive DIRTcar Summer Nationals championships.

The ups and downs of earning those feats led to their most significant achievement yet—the 2022 World of Outlaws CASE Construction Equipment Late Model championship.

However, what makes their title more significant is what it means for Lyne. She became the first female championship-winning crew chief in a national dirt Late Model series and North American motorsport series. She also won the World of Outlaws Crew Chief of the Year Award for the second straight year.

They’re honors she embraces, knowing she’s paving the way for other women hoping to find their place in racing.

“I think it shows my dedication to this sport,” Lyne said. “It shows I’m not a flash in the pan. It shows that I’m willing to put forth that effort. It is an honor.

“I hope that I serve as a role model to other women in the sport and other girls watching the sport to say, ‘Hey, if you work hard, you can be just as good as anybody else out there, and you can get it done. You just have to put your heart into it and put the hours in.’”

Erb echoed those words, and how much her hard work has paid off.

“It’s just another accomplishment we got,” Erb said. “For her to go out and be a part of this and win that, it makes me feel good, too, because it’s something she works hard for. And there’s not very many females out there that do that stuff and get greasy, with cuts, bruises, and it makes me feel good.

“It’s a good accomplishment for her, and I would say it shows to other people out there watching there’s a place for them to be a part of it.”

If you’re at the racetrack, you’ll see Lyne and Erb working together to get the car ready – as the only two crew members. But what people don’t see are the sacrifices she also makes behind the scenes.

Lyne balances her job as an electrical engineer with working on the race car full-time. But certain parts of her occupation apply to both.

“As an engineer, you’re trained in problem-solving,” Lyne said. “Time management, I’ve always been a stickler on time. I sacrifice sleep to get this stuff done. So, when we’re on the road, I’m up at six o’clock in the morning working from the truck, and then when we unload, I put my stuff up, and then I concentrate on the racing.”

Her balance allows the “dynamic duo” to be a well-oiled machine at the track.

“We each know what we need to do,” Erb said. “We’ve been doing this for a long time. I know what she’s able to do. I let her take and do things and everything she works on; I don’t have to worry about that.

“I have the trust and the confidence in her to get things done and that leaves me to do what I need to do. With her knowledge, and what she’s learned over the years and the way I’ve taught her how to do things, I have all the trust in her to get the job done.”

That knowledge and trust helped pave the way to the 2022 World of Outlaws CASE Late Models championship—21 years after walking into Erb’s shop, proving what she could do.

Erb and Lyne will return to defend their title in 2023, kicking off the season at Volusia Speedway Park at Sunshine Nationals Jan. 19-21.

If you can’t make it to the track, you can watch all the action live on DIRTVIsion – either online or by downloading the DIRTVision App.