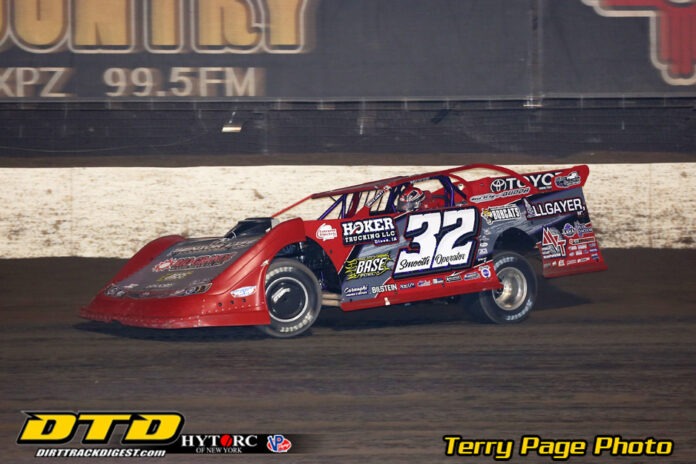 Lots of questions were rolling through Bobby Pierce’s mind before a two-lap shootout Friday at the conclusion of the fourth round of the Rio Grande Waste Services Wild West Shootout at Vado Speedway Park.

Could he snap Jonathan Davenport’s three-race winning streak? Could he grab his first career victory in a Longhorn Chassis? Could he earn $10,000 and fire the six-shooters in victory lane?

Instead of getting antsy behind the wheel, the 26-year-old Oakwood, Ill., driver made sure he didn’t get caught up in the moment.

The fifth-starting driver who overtook Davenport with an 18th-lap slide job at the 3/8-mile oval held on the final two laps to capture the 30-lapper, ending Davenport’s chances at the $300,000 Penske Racing Shocks Paydirt Jackpot and six-race sweep by taking the checkers 0.950 of a second ahead of the winner of the first three miniseries events.

Pole-starting Garrett Alberson of nearby Las Cruces, N.M., mixed it up with the frontrunners halfway through the 30-lapper and finished third while 20th-starting NASCAR star Kyle Larson of Elk Grove, Calif., and Brandon Sheppard of New Berlin, Ill., rounded out the top five.

While Davenport had been the only driver to visit victory lane, Pierce’s Longhorn was strong in leading the most laps of the opener followed by third- and second-place finishes. Pierce’s calming strategy Friday following a lap-29 caution for Dillon McCowan’s flat tire — an incident just in front of the leaders — helped him snap Davenport’s streak.

“I sat there on that restart with two (laps) to go, and I was like, ‘You know, it’s my race to lose,’ I thought to myself you know, it’s definitely a win that I wanted. My first win in a Longhorn and J.D.’s been on a hot streak here,” Pierce said. “But I just thought to myself, just pretend that you’re not racing for a big win. Just think you’ll be in this situation many more times, racing for maybe a million dollars.”

While the stakes weren’t quite that high, Pierce was glad to get on track after an offseason switch from his family’s Pierce Race Car to the North Carolina-based Longhorn Chassis.

“I can’t thank everybody enough for putting me in this position,” he said. “I just really hats off to everybody, whether it’s the crew guys, sponsors, everyone helps me out. I was on the phone with Matt (Langston of Longhorn Chassis today and he) helped me get through these holes. We finally made the right call on the tires.”

While Davenport had to give up the black cowboy hat he’d worn three times in victory lane, the outside front-row starter took his hat off to Pierce for outrunning him on the high side.

“I just changed my line a little bit (after a lap-10 restart) and then I guess Bobby found the extreme high side, you know, there in (turns) one and two,” Davenport said. “Once I moved up there, I could keep pace with him, but it’s just (that) sometimes it’s better (to be running) second. But I ain’t got no excuses. My guys gave me another great car again. Cory (Fostvedt), Vinny (Guliani) and Michael (Bixby) done a great job. I did the best I could. We just come up one spot short. But hey, we still run second. We can’t hang your head about that.”

Besides the caution for McCowan’s flat, the only other slowdown came on the 10th lap when Kyle Beard, losing control with problems with his left-front wheel, got into the outside wall in a multicar tangle that also left Terry Phillips with significant damage; Justin Duty and Mikey Kile were among other drivers involved.

In Shocker Hitch X-Mod competition presented by Barnett Harley-Davidson, Reece Solander scored an emotional first-career miniseries victory. Solander raced to the lead on lap 4, and turned back repeated challenges from multiple competitors, including Kris Jackson to bank the triumph.

Solander ultimately scored the triumph by 0.364-seconds over the 13th-starting Kris Jackson with 18th-starting Jessie Haynie in third, and Scott Bintz (started 15th) and Lucas Ward.

After a near-miss in last Sunday’s miniseries action, Tom Berry Jr. bounced back to get redemption on Friday night in the Mesilla Valley Transportation / Border Tire Modifieds presented by Ranch Milagro. The Des Moines, Iowa racer surged past Chad Wheeler on the fifth circuit to take the lead and once out front paced the field for the remainder of the 25-lap feature

The miniseries thunders back to action on Saturday, Jan. 14 with the fifth round of the mega miniseries. The festivities will include complete programs for the Dirt Track Bank Super Late Models presented by Black Diamond Race Cars ($10,000-to-win), the Mesilla Valley Transportation / Border Tire Modifieds presented by Rancho Milagro ($1,000-to-win), and Shocker Hitch X-Mods presented by Barnett Harley-Davidson ($500-to-win).