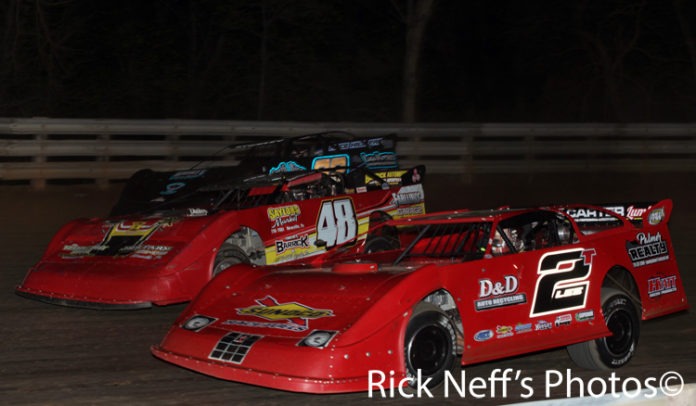 One of the things that many race teams and fans anticipate during the off-season is a new schedule of events. The Hagerstown Speedway staff has been working diligently at producing a quality schedule of races for 2017. The 2017 season will bring back many of the favorite events and divisions, while there are some new things as well.

The 2017 Hagerstown Speedway season unofficially kicks off at the Valley Mall on March 3-10 for the annual Race-A- Rama exhibition and car show, showcasing many of the machines you will see racing at the Hub City oval.

Open practice dates for testing and tuning at the speedway will be held on March 11, and March 18. The test days are open for all classes of race cars.

April is highlighted by the return of the Lucas Oil Late Model Dirt Series on April 22 for the Stanley Schetrompf Classic. Last year’s LOLMDS race provided a thrilling finish as Gregg Satterlee passed legendary racer Scott Bloomquist in the closing laps to score a very popular victory. Closing out April will be a Bedford Challenge event.


May brings in the inaugural debut of the Mason-Dixon Shootout Series, geared toward the Late Model Sportsman division. As many race fans of the region know, the steel-block powered 358 engine division offers some of the most competitive racing in the area, and this series is sure to be entertaining. As the summer months begin to heat up in June and July, the best of Central Pennsylvania 410 Sprint Cars will cross the border for the annual stop in Maryland for Pennsylvania Sprint Speedweek on July 5. Lance Dewease took the win last year over Ryan Smith at the track where he claimed his 1 st Sprint Car win in his storied career back in 1986.

July races are bookended by a Small Car National qualifier on July 15 and the Red Nininger Memorial as part of a Winchester/Hagerstown Shootout on July 22.

The “dog days” of August returns with a popular format that many fans love to watch. August 5 will be a twin feature night for Late Model Sportsman, Pure Stock, and Hobby Stock divisions. August 20 features the annual Small Fry Night for kids, and another visit from the Mason-Dixon Shootout Series. August wraps up with the return of Twin 20’s for Late Models on August 26.

As fall returns and the season winds down in September and October, there is plenty of great action remaining. The final point races for all divisions, the Small Car Nationals, another Twin 20’s for Late Models, and the 70 th Anniversary Celebration weekend of events that is sure to be a big event to end the season.

This is just a highlighted example of what you can expect to see at Hagerstown in 2017. Special events also include the Community Yard Sale and Swap Meet, the Bonanza Extravaganza, Motorcycle Racing, appearances of Crate Late Models, the Penn- Mar Vintage Racers, and the always popular Monster Jam. The full schedule of events, dates, and times will be posted very soon. As always, the racing schedule and divisional card is subject to change at any time necessary.

Come, be a part of, and enjoy the 70 th season of racing at the Hagerstown Speedway. For more information, e-mail the track at info@hagerstownspeedway.com , or call the speedway office at 301-582-0640.