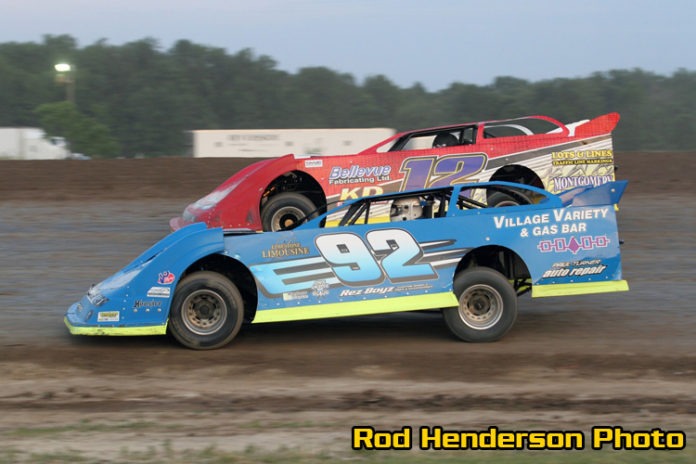 BRIGHTON, ONT – Brighton Speedway has reached a milestone of fifty consecutive seasons of operation and track management and is excited to announce one of the most exciting schedules to date! The schedule is filled with twenty four action packed events for the 1/3rd mile clay oval from April till September with our weekly divisions consisting of the Vanderlaan Building Supplies Late Models, OilGARD Anti Rust Canadian Modifieds, Brighton Automotive Pro Stocks, Bill’s Johns Comp 4 and the Quinte Septic Stingers!

It all kicks on April 29th with the annual Monster Energy Season Opener. Fans can enjoy a night of racing for just a toonie with a donation to the Brighton Fare Share Food Bank. This event is one of the biggest food drives the Brighton Food Bank has all year and continues to grow each season.

The Southern Ontario Sprints will make Brighton Speedway a regular stop once again on their 2017 schedule with a total of six races at the Lake Ontario Oval. They will kick off the SOS season on Victoria Day weekend on May 20th, returning again on June 17th, July 8th, August 5th and twice during their Annual Southern Ontario Sprints Labour Day Weekend Classic for a double header of Sprint Cars on Saturday September 2nd and Sunday September 3rd! Labour Day Sunday is also known as Topless Night around the oval as three divisions will compete without their lids; Brighton Speedway Late Models and Canadian Modifieds as well as the Simon Petit Memorial Wingless Sprint Car Dash.

Arguably the biggest event off the 50th anniversary season will be the return of the Vanderlaan Building Supplies & Dibbits Excavating World of Outlaw Late Models Mud Slingin’ 50 Presented by Excel Tower Service on June 17th. The World of Outlaws Late Models will be joined by the Southern Ontario Sprints and Pro Stocks. This combination of racing was a huge success in 2015 as fans flocked to the Speedway from all over Ontario for a near sellout crowd and the same is anticipated for the 2017 event!

July is a busy month at the track and kicks off July 1st with Brighton Speedway’s own celebration of Canada’s 150th Anniversary with the annual Canada Day Championships. This event marks the mid-season point of the speedway’s schedule with extended lap races, double points and time trials for all divisions handing out the fastest lap award! The evening will also include a Huge Fireworks show from Mystical Distributing! Time trials for all divisions start at 5:00 pm and racing kicks off at 7:00 pm


The Rinaldi Family and Staff wanted to ensure the fans and drivers were honored with a special 50th Anniversary night that will be held on July 15th with the Brighton Speedway 5oth Birthday Celebration featuring OSCAAR Hot Rods, Eastern Ontario Vintage Stock Car Club, a 50 Lap Late Model special paying $750 to win, a 50 Lap Canadian Modified paying $550 to Win and a 50 Lap Pro Stock special $350 to Win. Pre Race ceremonies will feature a Live Band, Classic Race Car and memorabilia display in the court yard from 3:00 pm – 6:00 pm and the Wall of Fame Inductions at 6:00 pm before dropping the green flag at 7:00 pm.

Champions will be crowned on Saturday September 9th when the final points night of the season is complete! The night is also host to the Annual Danny Reid Memorial 50 Lap Race for Canadian Modifieds paying $2,000 to win! #87 Andrew Hennessy claimed the coveted Silver Piston trophy and prize money in 2016 but there will be many drivers wanting to get their name on the trophy for 2017!

The Annual Applefest Shootout Weekend returns to Brighton Speedway in 2017, an event that is now in its 13th year continues to grow drawing over 300 cars from all over Ontario, Quebec, New York and Pennsylvania competing over the two days in 2016 which was a track record. Overflow pit area and camping has been required in the last few years attesting to the success of the weekend. The 2017 version of the event will kick off on Friday September 22nd featuring DIRTcar Sportsman Super Dirt Series Race I, Go Nuclear Late Model Series Race, Eastern Ontario Vintage Classic, Comp 4 Special 25 lap Open event and Pro Stocks. Saturday marks the return of the mighty 358 DIRTcar Modifieds with the 75 Lap 358 Modified Shootout! Dirtcar Sportsman Series Race II, Go Nuclear Series 50 Lap Great Crate Race for Late Models and Canadian Modifieds! Camping is free for this can’t miss action packed weekend of racing!

The season will then close out with the fan favorite; Lange and Fetter Ford Eve of Destruction and Workman OK Tire School Bus Races! This day of fun and excitement entertains fans of all ages with wide range of car smashing, trailer wrecking, long jumping events. The day’s events include the Hotch’s Auto Parts 100 Lap Monster Enduro Race, a Youth Enduro, Ladies Enduro, Trailer Race, Flag Pole Race, Long Jump Competition, The Gauntlet and for the finally the Brighton Recycling Demo Derby! The event is a sell out every year so be sure to get there early to get a seat!

Angela, Mark, Diane and Lou Rinaldi would like to thank all the fans, crew members, drivers and sponsors that has helped make Brighton Speedway the success it is for the first 49 seasons and are excited for the 50th anniversary season! Join us for the first car show of the season at the International Centre in Toronto for the Motorama Show and be the first to grab the 2017 schedule. Check out the #29 Fowl Mood Vanderlaan Building Supplies Champion Late Model at our booth March 10th to 12th. Be sure to check out the 2017 Schedule of Events at this link for complete details and latest news on the upcoming season!
Brighton Speedway Newsletter: Sign-up for the Brighton Speedway newsletter and get all speedway information delivered straight to your email inbox! Get track news, information, and updates directly to your email twice a week. It takes just two minutes to sign-up. Click here to get started!