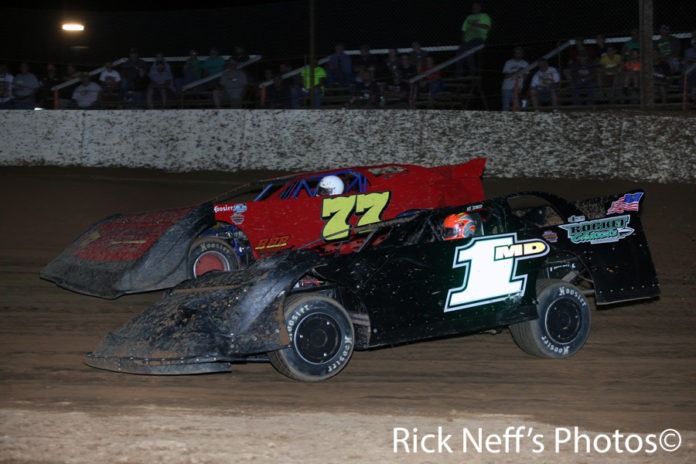 SPRING RUN, PA – Path Valley Speedway Park will return for their second year as a Sweeney Chevrolet Buick GMC RUSH Dirt Late Model Weekly Series member track. The 1/4-mile bullring is RUSH’s only central Pennsylvania facility, and is located minutes off the Turnpike between Bedford and Harrisburg. Path Valley will host eight nights of action scattered throughout their 2017 schedule.

After a highly successful RUSH Late Model debut with a Sweeney Chevrolet Buick GMC Weekly Series event on August 14, 2015, Path Valley stepped up to become a Weekly Series member track in 2016. The Spring Run, Pa. facility was one of 23 speedways in 2016 to host a RUSH Late Model-sanctioned event. Nine nights were completed with 12 features run. Brad McGinnis led the way winning six of them to earn the $300 “Track Pack” Bonus Program Championship. Other winners were Tim Snare (2), Kris Eaton (2), Steve Lowery, and Mike Franklin. Eaton’s success helped propel him to the $5,000 Bilstein Bandits Championship.

“Path Valley played host to is first RUSH event at the end of the 2015 season, and we saw good car counts for the RUSH Late Models throughout the 2016 season,” stated Path Valley’s Mike Donald. “While this area has a strong Steel Block Late Model presence, we are seeing an increased enthusiasm for RUSH Crate Late Models in this area. We believe RUSH Late Models will continue to grow, and we wouldn’t be surprised to see more tracks add RUSH in this area. Path is happy to have RUSH Late Models back in 2017, and we are excited about all the incentives that drivers at Path are provided by RUSH for competing here.”


RUSH member racers in 2017 will be eligible for all of the programs including the Sweeney Weekly Series Championship, the Pace Performance “Summer Chase”, along with the Bilstein Bandits and the “Futures Cup” for those eligible racers. Member racers will battle for the “Track Pack Bonus” with $300 going to the driver that accumulates the most RUSH points at Path Valley, $200 for second, $150 for third, $100 for fourth, and $50 for fifth. Contingency prizes will then be posted for those racers in sixth through eighth in the RUSH member points at Roaring Knob. While membership is not mandatory to compete in any RUSH-sanctioned event, membership also include a $100,000 excess participant accident policy, which is over and above drivers’ health insurance and speedways’ participant accident policy.

“We’re very excited Path Valley continues to give Crate Late Models a place to compete at and under our sanctioning,” expressed RUSH Series Director Vicki Emig. “It’s no secret steel blocks are very popular and still successful in the central and eastern part of Pennsylvania, but crate racers are always looking for additional places to compete at and Path Valley has proven to be a tremendous place to race at with its surface and configuration. We have to thank Path Valley’s Mike Donald for continuing to work hard for RUSH Late Models at the track and owners John Wisnett and Jack Flowers for allowing us the opportunity to compete there.”

For more information on Path Valley, check out their website at www.pathvalley.com or “like” them on Facebook by searching Path Valley Speedway Park. Path Valley is located at 17911 Dry Run Road, Spring Run, PA 17262.