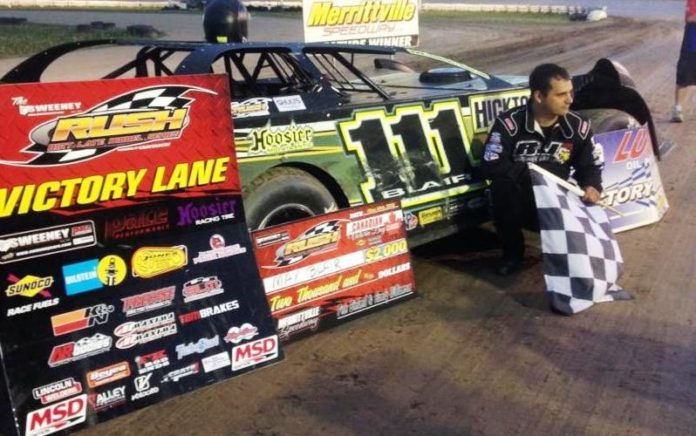 BUSTI, NY – The Sweeney Chevrolet Buick GMC RUSH Racing Series powered by Pace Performance is proud to announce that not only will the RUSH Late Models and Pro Mods will be returning under the Weekly Series banner at Stateline Speedway on Saturday nights in 2017, but have also signed a three-year contract for both divisions! The Scott and Horner Families are set to begin their second full season of track ownership beginning on April 8, and have also scheduled a first ever Sweeney Tour event for the Late Models on Saturday, May 20.

The 2017 season will mark the third under the RUSH banner for Stateline. Bill Catania operated a partial season in 2015 featuring the RUSH Late Models for the first time ever before the Scott Family and partner Brian Horner took over later that season and ran two events. Last year’s first full season of RUSH Late Model competition at Stateline saw eight different drivers capture wins.

For the first time in the history of Stateline and since Crate Late Models were introduced to the Northeast in 2007, the Busti, New York oval will host a Touring Series events. On Saturday, May 20, Stateline will hold the “Bill Law Memorial”- a $2,000 to-win Sweeney Marquee Tour event. Law was the first person in the Northeast to have a Crate Late Model even before the division was formed. Law was a big supporter of the concept and fielded cars for numerous drivers over the years including Jim and Jean Scott’s grandson Kyle Scott. Law was a great supporter of his grandson Kyle Murray’s go-kart efforts, who will now debut in the RUSH Late Model class in 2017.

In 2016, the new Sweeney RUSH Pro Mod division was brought on featuring GM 604 or 602 crate engines in E-Mod type cars on the $135 sealed, spec Bilstein Shocks and the RUSH 91 pump gas. The Pro Mod division is expected to have substantial growth in 2017 with several new drivers participating including some well-known veterans. The division also got a boost when nearby Bradford Speedway added the class weekly on Sunday nights along with special events at McKean County Raceway in 2017. The second annual “Manufacturers Night” presented by MSD Performance will be held at Stateline on Saturday, July 29.


“We cannot thank the Scott Family enough for their support of RUSH,” stated Director Vicki Emig. “They were good enough to sanction their last two Late Model events in 2015 with us, and we were appreciative they not only brought on the Late Models with us in 2016, but helped us form and develop the Pro Mods, which is really taking off now. We were thrilled last week when we got the call they were signing a three-year contract for both classes and also wanted to make their Bill Law Memorial a Sweeney Marquee Tour event. Bill was a pioneer in the development of Crate Late Model racing in the Northeast and continually promoted the concept from the very beginning. I can’t imagine how proud Bill would be to know his grandson Kyle will be joining the division in 2017 and carry on his legacy.

In the spring of 1956, five young Sugar Grove, Pa. natives (Leonard Briggs, Lloyd Williams, Don Frank, Jerry Frank, and Marv Thorpe) drove through the night to New York City to complete a deal to purchase 77 acres of land. They told the seller they wanted to “cut some fence posts”. The selling price was reputed to be $1,200. The trees on the land were indeed felled and fence posts were indeed cut, albeit in the form of guardrail posts and light poles!

By early July, the five had a 1/3-mile clay oval formed. The track featured 400′ straightaways with 125′ radius turns at each end. Bleachers were constructed on both sides of the speedway, only three rows high on the “New York” side and all but the center section on the Pennsylvania side. The center section was five rows with a “judge’s stand”, a 10′ square platform built behind it. The “judge’s stand” was open to the elements, a very real problem with weather.

The track took its name from the proximity of the New York/Pennsylvania state line, located one-half mile south of the track. In the beginning a rumor had it that the track was bisected lengthwise by the state line, a rumor put to good use for crowd control by the speedway. Beer was sold only on the “New York” side of the track and a fence was placed in the walkway to the New York grandstands. In order to gain entrance to the New York side, a fan had to prove he/she was 18, the age required to purchase beer at that time.

Late Models were the only class in the beginning and have been the featured class throughout the track’s history. A “Novice” class was tried in 1960 without success but a six-cylinder “Sportsmen” pre-war coupe class was added in 1962 as a result of a series of special 100-lap ‘jalopy’ races starting in 1957. “Hooligans” were added in 1968 with the “Spectator” class added in 1975. The Sportsman coupes were dropped in 1985 when Francis and Lynn Seamens took over from the original owners. Limited Late Models were added in ’85, then the unique rear engine V-6 Sportsmen in 1997. E-Mods were added by 2000. Front wheel drive compacts came along in the early 2000s. Crate Late Models, unsanctioned, were run in a special in 2010 then added to the weekly card in 2011.

Of the original owners, only Jerry Frank and Thorpe are still living. Both Seamens have passed away, Lynn in 2006 and Franny in 2010. The track was them operated by Seamen’s second wife, Jenifer, who leased the track to Bill and Lynne Catania in 2014. They operated the speedway until current owners Jim and Jean Scott and Brian Horner purchased it in the summer of 2015.

In 2015, Catania added RUSH sanctioning to the class, giving added importance to the class at the now 61-year old facility. When the Scotts and Horner purchased the speedway, it was continued, offering extra incentives for local competitors, extra prestige in belonging to the largest regional sanctioning body for the class, and more fan appeal with some of the top drivers in the class towing great distances to compete. The opportunity to win thousands of dollars through the Series’ various point funds in addition to thousands of dollars’ worth of prizes on the annual Manufacturers Night is an added draw for competitors. The Scott and Horner Families then of course brought on the Pro Mods last season under RUSH.

Of the RUSH sanctioning the track owners stated, “Racing needs rules and regulations. RUSH brings these rules and regulations. With Crates Late Models, they can have the latest up dated chassis and suspension, but they all have the same engines and tires. This puts the success in the driver’s hands. With the rules being standard, drivers can race at any track and know they are legal. With equal drivers and rules, this can make for great racing, and competition brings excitement! Right now small dirt tracks need competition, great racing, and excitement.”

The future of RUSH Late Model racing indeed looks bright at Stateline Speedway with usually 20-25 cars competing weekly. The purse is among the highest in the area. Competition is always fierce with a total of 39 different teams competing. Stateline has always been a leader in Late Model racing. With RUSH sanctioning, Stateline strengthens its stance in the top echelon of dirt track. The opener for the RUSH Late Models will be on Saturday, April 8.