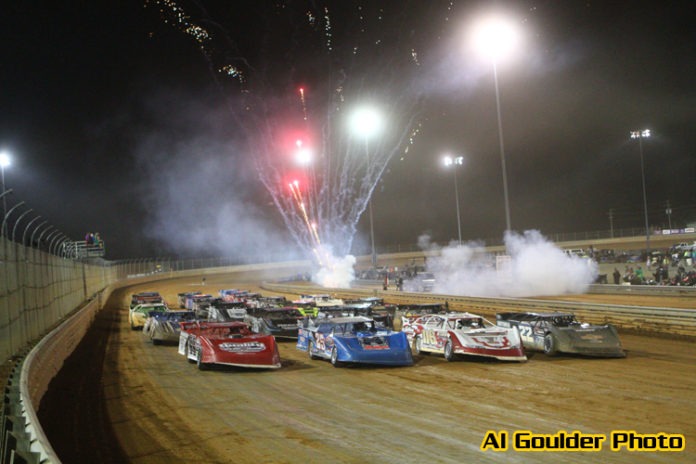 JAMAICA, VA – One of the most anticipated events of the year gets the green flag this Saturday April 8th with the running of the $20,000 to win Aaron’s King of the Commonwealth presented by Essex Concrete. Saturday April 8th Bill Sawyer’s Virginia Motor Speedway will host one of the most prestigious events in the country and the largest short track event in the State of Virginia. That means some of the best dirt late model drivers on the East Coast will be making the trip to the ½ mile speed plant located in Jamaica, VA.

The event will be sanctioned by the Ultimate Super Late Model Series and will feature a 60 lap A-Main paying the winner a cool $20,000. The event will also feature a $3000 to win FASTRAK National Tour race for Pro (Crate) Late Model drivers.

“If you are a fan of short track racing you do not want to miss this event; the best dirt late model racers on the East Coast will be vying for that huge $20,000 check in what is the biggest short track event in the State of Virginia,” commented track owner Bill Sawyer.

Sawyer added, “we can’t thank Aaron’s and Essex Concrete enough for their sponsorship of this event, we could not put together such a phenomenal event without their support.”

Last season Mother Nature decided on bringing a snowy weekend to the party causing officials to cancel the event. In 2015 Randy Weaver of Crossville, TN bested a stellar field of competitors, in what was an amazing race, to take home the $20,000 winner’s check in the Ultimate Super Late Model sanctioned Aaron’s King of the Commonwealth presented by Essex Concrete. In the FASTRAK National Tour event, local driver, Walker Arthur took home the win and $3000 winner’s check.


The speedway is expecting a great field of cars this year for both events. Defending Champion Dennis “Rambo” Franklin of Gaffney, SC will lead the Ultimate Super Late Model contingent into battle against the Mid-Atlantic’s top drivers. Expected to compete are Chris Ferguson, Rick Elliott, Ricky Elliott, Austin Hubbard, Dale Hollidge, Jason Covert, Justin Williams and a host of other regional hot shoes.

16” coolers are welcomed but no glass is allowed. There is plenty of free lit parking and camping (no hookups) is allowed at no charge on a first come first served basis.

Race fans can go to www.vamotorspeedway.com to view the complete schedule Virginia Motor Speedway’s 2016 season, find detailed event information, get the latest news, and get complete ticket and camping information. In addition, fans can get social with Virginia Motor Speedway by following @vamotorspeedway on Twitter, clicking “Like” at www.facebook.com/VaMotorSpeedway and on www.youtube.com/VaMotorSpeedway.