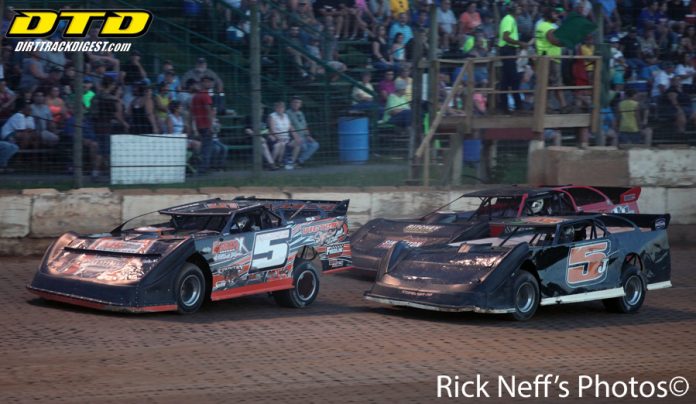 MILL HALL, PA – After a successful practice session on Friday April 28th, Clinton County Motor speedway is ready for the first official race of the 2017 season this Friday night May 5th. Pit and grandstand gates will open at 5: p.m. with warm-ups at 7: p.m. and racing at 7: 30 p. m. with a four-division show of C&E Containers, Inc and Freyco racing limited late models, along with Auto Barn IMCA sprints, Glenn Hawbaker Inc. Front Wheel Drive Four-Cylinders and 270 Micro-Sprints.

In last Friday’s practice session, close 50 racing machines took to the 1/3-mile oval in four different sessions. Mike Smith of Renova, Pa. was breaking in a new XR1 Chassis owned by Rob Probst, along with Smith’s own #57 car which was begin tested by Kevin Probst. Jim Yoder who will be doing more limited racing on Friday nights was breaking in his #42 car which is a MBH chassis, with a Miller racing engine. Denny Fourney of Mill Hall, PA. has made a change for this year and will not have the familiar #00 on the side of his car, but will be using the #67 this year. That was just three of the 13 drivers that were on hand in the limited class. Ten drivers in the 270-micro class were on hand along with three drivers in the 600-micro class. Six drivers were wheeling around in the IMCA sprint class with one driver racing a 360 engine. Seven drivers in the pro-stock class also with 8 drivers in the front wheel drive four-cylinder class. Each division will get plenty of races this season, with nine different divisions in action during the season. The Glenn Hawbaker FWD four-cylinders will race 18 times during the season. The 270-micro-sprints will have 17 shows, with the 600 micros getting 11races. The Limited late models will have 16 shows, with the TC Transport Inc. Pro-Stocks hitting the track 14 times during the year. The IMCA sprints will see action 11 times, with the super late models to get four shows during the year, along with one show for the 125 micro-sprints.

Sam Ray and Wayne Cochran have just signed on the TC Transport, Inc to sponsor the track pro-stock class for this season. TC is a local trucking company out of Bellefonte, Pa. providing bulk service transportation through Pa, NY, and Ohio. They also prepare and market a variety of bark mulches for commercial and residential use.

The super late models will have four shows at the speedway this season, with the first race on Friday June 16th, which will be sponsored by G&R Excavating& Demolition of Tryrone, Pa. July 21st for the second event with Stocker Chevrolet&Subaru of State College, the title sponsor. The third race will take place on Friday August 4th on Strouse Electric of Howard, Pa. night. With four race on Saturday October 14th on S&R repair and Towing night.

Two Mason-Dixon limited late model specials will be run at the track on Friday June 2nd on Strout Pro Auto of Jersey Shore, Pa., night, with the second on Friday August 18th on Braim Refrigation and Air Conditioning of Turbotville, Pa. night.


For more information you can check out the tracks web-site at www.clintoncountymotorspeedway.com or like us on facebook. Or call the speedway office at 1-570-971-2126