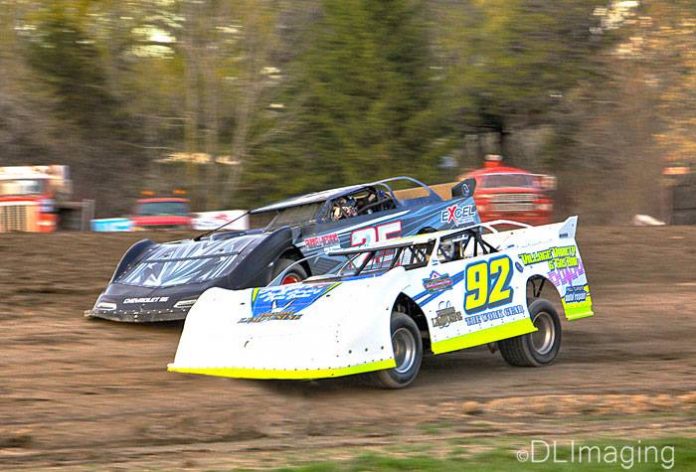 Ramsay Picks Up Where He Left Off
The Brighton Automotive Pro Stocks took to the track for the first feature of the year with Doug Anderson (No. 72) and Wade Purchase (No. 53) starting on the front row. Anderson quickly jumped to the front of the field and felt early pressure from 2016 division champions Justin Ramsay (No. 03). The two raced closely for the first half of the race before a caution on lap 9 for a spin by Travis Coates (No. 44). Ramsay was able to sneak by Anderson before the field slowed for the yellow flag.

On the lap 10 restart Ramsay was able to pull away and lead the final ten laps for his first win of the season over Anderson and Brandon Murrell (No. 19). “It’s hard to top last season, but this win is a good start” said Ramsay who won both the track title in 2016 along with the four track Duel in the Dirt championship.

Hennessy Continues His Winning Ways
Defending division champion Andrew Hennessy (No. 87) and Doug O’Blenis (No. 32) led the 25 lap Bainer’s OilGard Canadian Modified feature to the green flag. Hennessy held the early lead before mechanical issues slowed O’Blenis to bring out the first caution of the race on lap 2. On the restart Curtis King (No. 07) flexed his muscle by challenging leader Hennessy around the high groove. By lap four King had cleared the leader and took control of the event leading the next 18 laps.

A caution on lap 21 would bunch the field up and give Hennessy along with Kraig Handley (No. 91) and Derrick Grieg (No. 48) a chance to challenge the leader. The reigning champion got the better of King on the restart and led the final 4 laps for the win. King would finish in second while Handley completed the top three. “I couldn’t believe Curtis was able to pass me on the outside” said Hennessy. “I was able to get back by him though and get a win for my late Uncle who passed away 17 years ago on this date” he added.


Historical Name Wins on Historical Night
In 50 years of racing at Brighton Speedway the name Turner has been in competition for nearly every season. On this night, it was second generation driver Adam Turner (No. 92) leading the Vanderlaan Building Products Late Models to the green alongside Charlie Sandercock (No. 57). Turner led the opening lap before Sandercock would work around him on the outside of corner four to lead lap two. From there the multi-time champion opened up a straightaway advantage over Turner, Greg Belyea (No. 25) and Steve Baldwin (No. 5). A number of cautions slowed the race, but each time Sandercock was able to pull away from the pack.

On lap 19 Trevor Lewis (No. 73) made hard contact with the frontstretch wall bringing out the final a caution of the race. When the race resumed, Turner was able to keep pace with Sandercock and then work by him on lap 22. Sandercock charged hard around the outside of the leader in turn four the following lap but made heavy contact with the right rear of his car causing significant damage. From there Turner was able to cruise to the win over 2016 Champion Phil Potts (No. 29) who charged from his sixth starting position. Steve Baldwin rounded out the top three.

“This is pretty special for a Turner to be in victory lane on opening night of the 50th Anniversary season” said Turner. “My dad (Paul) started racing here in 1974, so there has been a Turner racing here for nearly every season of the tracks history” he added.

French Family Feud
The final race of the evening was the 15 lap Bill’s Johns Comp 4 feature. Defending champion Tyler French (No. 0) and Adam Flieler (No. 11) started on the front row. French jumped out to the early lead and was followed closely by third place starter, and Josh French (No. 08). Josh followed Tyler in his tire tracks for the first 12 laps before bumping his brother out of the way in corner four to take the lead. The pair put on a show in the closing laps with Tyler eventually getting back by Josh for the win. Flieler would finish in the third position.

“What happens at the race track stays at the race track” said French after the win. “That was a lot of fun to race like that out there” he added. The French family ended the night celebrating together in victory lane.