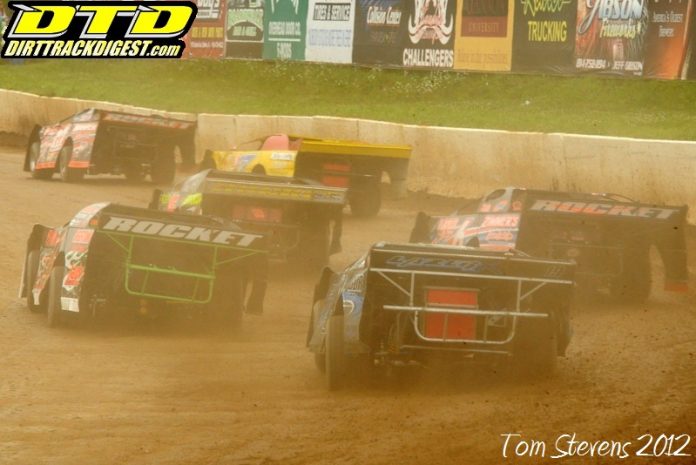 HAMMETT, PA – For 2017, Eriez Speedway will again be under the very capable leadership of Bobby and Kathy Rohrer and will aligned with the Sweeney Chevrolet Buick GMC RUSH Late Model Series powered by Pace Performance for the third consecutive year. The 2017 season will get underway this Sunday evening (May 7). Two $2,000 to-win Sweeney Marquee Tour events are scheduled for May 28 and July 30, which will attract the top area drivers this summer.

Eriez was built in the spring of 1961 by “Busti Speedways”, the owners of nearby Stateline Speedway, and opening for its first event on July 20, 1961. On that historic night, the race was ended on the 17th of 25 scheduled laps when crowd favorite Squirt Johns flipped his racer end-for-end and needed to be transported to the hospital. Local standout Tom Dill, the leader at the time, was awarded the victory. In the fall of 1984, area businessman Charlie Bonta purchased the track and operated it through the 1986 season. In 1987, three events were promoted by Francis Seamens, at the time owner of Stateline Speedway. Seamens then purchased the track, operating it until selling it to the Rohrers in the spring of 2006.

From the beginning, Eriez featured Late Models, the area’s premier class in 1961 and through its history. As costs for fielding Super Late Models escalated, it became apparent that measures were needed to provide a lower cost yet exciting alternative. Thus the RUSH Late Models, featuring a crate engine powerplant, were introduced at the start of the 2015 season. The class proved to be an immediate hit with both fans and race teams. Soon full fields of the powerful, yet affordable, sleek Late Models were exciting fans every Sunday evening.

In 2016, Eriez was the site of the popular RUSH “Manufacturers Night” presented by MSD Performance. was held at the track, giving away over $40,000 of cash and contingencies to the 47 participating racers. Max Blair was the feature winner of the event. In 2016, Eriez hosted a pair of $2,000 to-win Marquee Tour events with Rob and Max Blair taking the wins.


With top-flight drivers such as Kyle Zimmerman (2015 champion), Jason Genco (2016 champion), Blair (all-time leading feature winner), Chad Wright, Matt Latta, Andy Boozel, Dave Lyon, Wyatt Scott, Bruce Hordusky, Jr., and many more of the best drivers in the area competing weekly, Eriez will be the place for teams and fans to congregate each and every Sunday night form opening night on May 7 through the final points night on September 3. The final event of the season will be the popular “September Sweep”, scheduled for September 22-23 featuring qualifying on Friday night then the main event Saturday. The 2016 “September Sweep” saw track champion Jason Genco top Max Blair in a “photo finish” for the $3,000 top prize.

“We have to thank Bob and Kathy Rohrer for their continued support of RUSH,” stated RUSH Director Vicki Emig. “Not only do their sanction their Crate Late Models weekly with us, but offer two $2,000 to-win Marquee Tour events, and this year are bringing in our RUSH Sportsman Modifieds for the first time ever. The Rohrers have done tremendous job with the facility and racing surface. In 2016 they averaged over 20 cars per event and that’s expected to continue in 2017.”

RUSH member racers in 2017 at Eriez will be eligible for all of the programs including the Sweeney Weekly Series Championship, the Pace Performance “Summer Chase”, along with the Bilstein Bandits and the “Futures Cup” for those eligible racers. Member racers will battle for the “Track Pack Bonus” with $300 going to the driver that accumulates the most RUSH points at Eriez, $200 for second, $150 for third, $100 for fourth, and $50 for fifth. Contingency prizes will then be posted for those racers in sixth through eighth in the RUSH member points at Eriez. While membership is not mandatory to compete in any RUSH-sanctioned event, membership also include a $100,000 excess participant accident policy, which is over and above drivers’ health insurance and speedways’ participant accident policy.

Eriez Speedway is a 3/8-mile track located outside of Erie, Pa. in Hammett at 9821 Sampson Rd., Erie, PA 16509. For more information, check out www.eriez-speedway.com. Follow them on Twitter @EriezSpeedway1 and like their page on Facebook at www.facebook.com/eriezspeedway.