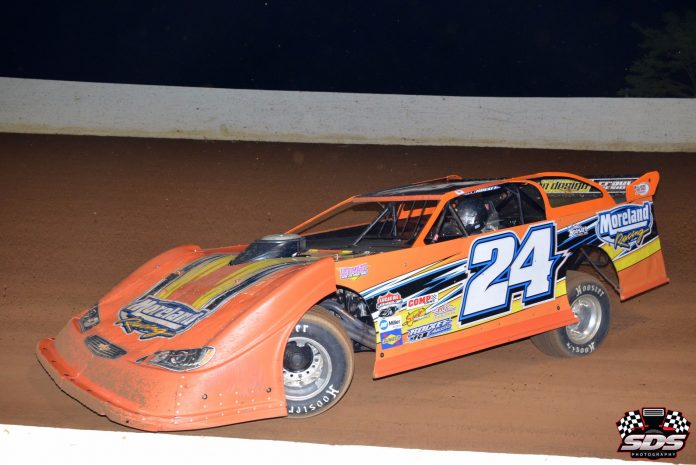 WINCHESTER, VA – In his first start of the season, Waldorf Maryland’s Kenny Moreland drove to his first win of the 2017 campaign in last Saturday nights 30-lap Late Model feature at Winchester Speedway. Moreland’s win, worth $2000, made him the fourth different winner in the five races contested for the class this season.

The top six redraw placed Andy Anderson and Brian Booze on the front row for the start of the event with Anderson booming into the lead with Booze in tow. Anderson looked like a potential winner as he would lead until a multi car pile up brought out the red flag on the 14th circuit. During the red flag stoppage, Anderson exited his Jack Bland owned no.41 and appeared to make some type of repair on his racer. Officials stepped in and told Anderson he would be sent to the rear of the field for the rule infraction. Not happy with the call, Anderson showed his displeasure, before finally taking his car to the pit area. When racing finally got back under way Kenny Moreland, who was second to Anderson before the fateful red flag, was the new leader. Moreland would then pace the final 16-circuits over a hard charging Ross Robinson to post the win aboard his Rocket XR-1 no.24.

“I never expected to have gotten the lead the way we did.” A surprised Kenny Moreland stated post race. “This track was definitely elbows up tonight and I hope we put on a good show for all the fans that came out tonight.”


Moreland was quick to acknowledge the people behind his winning drive. “It seems like every week we’ve been rebuilding this car and everyone who helps, especially my mom and dad, this win is for them.”

Dale Hollidge came on late for third with Ronnie DeHaven Jr.and Walter Crouch rounding out the top-five. Setting fast time in time trials over the 22 car field was Jamie Lathroum as he set a new track record with a one lap time of 13.748. Heats went to Brian Tavenner, Hollidge and Robinson.

James Lichliter scored a flag to flag win in the 20-lap Limited Late Model headliner. Lichliter darted from the pole to the lead and would then have to repel the repeated advances from eventual runner-up Kyle Lear to post the win steering his MasterSbilt no.8.

“This is a big win for our team.” James stated in victory lane. “Kyle Lear is one of the best in the business and to hold him off for the win tonight is a great feeling.”

Austin Stover, Sam Rial and Kurt Zimmerman would trail at the finish. Heats for the 21 cars entered went to Greg Roberson, Lear and Stover.

Defending track champion Logan Roberson broke the three race win streak of Allen Brannon for his first of the season in the 20-lap RUSH Crate Late Model main. Roberson, who lined up 5th for the start, took the lead from Devin Brannon on the 6th circuit and would cruise to the win in his family owned Rocket XR-1 no.17R.

“I wasn’t content following those guys, so on that lap five restart I charged the corner on the top.” Said Logan. “The car stuck pretty good up there and we were finally able to get a win here this season.” Devin Brannon held on for a career best second with his father Allen Brannon, Timmy Booth and Jacob Piper completing the top-five. Heats went to Roberson and Piper.