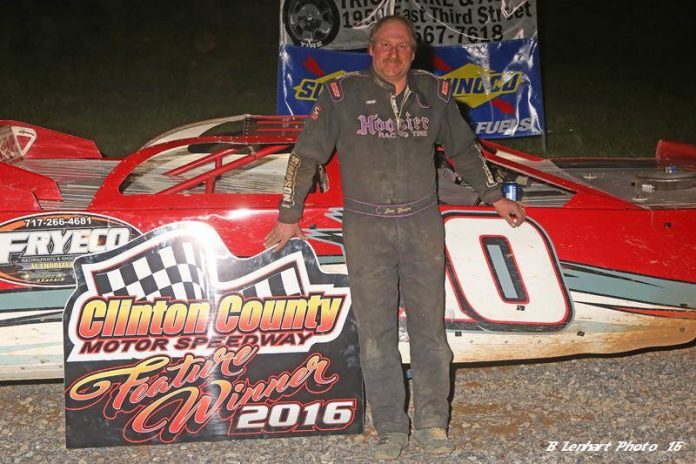 MILL HALL, PA – Clinton County Motor speedway completed all but one feature event before the rains came just as the Front Wheel Drive Four-Cylinders competed one of their feature. Before the rains came Jim Yoder of Selinsgrove picked up the win in the C&E Containers, Frecyo Racing Limited late model 25-lap feature. Other winners on the night went to Noah Jensen of Nescopeck, Pa. in the T&C Transport Inc. Pro Stocks, Mason Peters of Shickshinny, Pa. and Alec Quiggle, Mill Hall. Pa. in the 270, and 600 micro sprints, all features were 15-laps in distance for the three divisions.

Just like he did to open the 2016 season Jim Yoder, picked up the opening night win in the Limited late models, this time driving his own #42 MBH racecar. Last year Jim drove the John Urlier #U10 to the win. “I really like racing here at Clinton County it is usually pretty good racing. For the first six laps of the feature Jim was watching his son Dylan leading the event. First on lap four he moved around Jeremy Ohl for second, and was closing in on Dylan when the second caution of the race flew for a three-car pile-up in turn two, which involved last year’s track champion and Jim’s nephew Andrew Yoder, at the same time Dylan slowed and came to rest outside of turn four. From the restart on lap seven the race went non-stop till the checkered with Jim winning the feature by half a track.

“I believe Dylan’s car had some rear end issues, and if was not out of the race it would have been a little more challenging for sure, that is how it goes sometimes”.

Jim has the #42 on the side of his car, because it was the number his uncle used when he raced. Joe Lusk of Jersey Shore, Pa. drove to his best ever finish in the limited class with a second-place finish, where he ran from lap seven on. JR Toner of Bellefonte, pa. was third followed by Gary Mellott and Bryan Benton of Duncansville, Pa. fifth. Heat races went to Jim and Andrew Yoder.


From his pole starting position Defending Pro-Stock champ lead from flag to flag in the non-stop feature race. Tommy Dawson of Wapwallopen, Pa. gave chase all the way, and got close on a few occasions, but had to settle for second place. AY Schilling of Jersey Shore, Pa. was third with Chad Walter and Johnny Bouse rounding out the top five.

“The one thing my uncle Richie had on me is that when he raced he won a season opening race, and Now I have done the same thing”. Noted Noah. Heat races went to Dawson and Chris Snyder.

The 600-Micro-Sprints also ran a non-stop feature with pole sitter Alec Quiggle leading all the way, but had to hold off Jeff Weaver of Lock Haven Pa., who chased him all the way to the end. Defending track champion Josh Beamer rode home in third with Erick Knopp and Dexter Strawser in the top five. Heat races went to Quiggle and Beamer.

Mason Peters started where he left off as the 2016 270-micro-sprint champ scored the win in the 15-lap feature. Bob Garvey Jr. of Grass Flats, Pa. lead the first three laps of the feature before the red flag was waved for a flip by Logan Hammaker of Williamsport, Pa. in the first turn, he was not injured. On the restart, Mason powered around Garvey Jr. for the lead, and then held off Jeff Weaver who made a couple of attempts to get by Mason, and had to settle for another second-place finish. Garvey held on for third with Troy Whitesel, and Gary Keister in the top five. Three heats for the 26 drivers on hand went to Bryce Craft, of Frenchville, Pa. Lance Spotts of Williamsport, pa. and Weaver.

Next week the IMCA sprints sponsored by The Auto Barn will return along with Limited late models, Pro-Stocks, 270-micro-sprints and FWD Four-Cylinders along with the make-up feature for the FWD, on Friday May 19th. Gates will open at 5p.m. with warm-ups at 7p.m. followed by racing at 7:30 p.m. You can check the web-site for updates at www.clintoncountymotorspeedway.com or like us on Facebook or call the speedway office at 1-570-971-2126