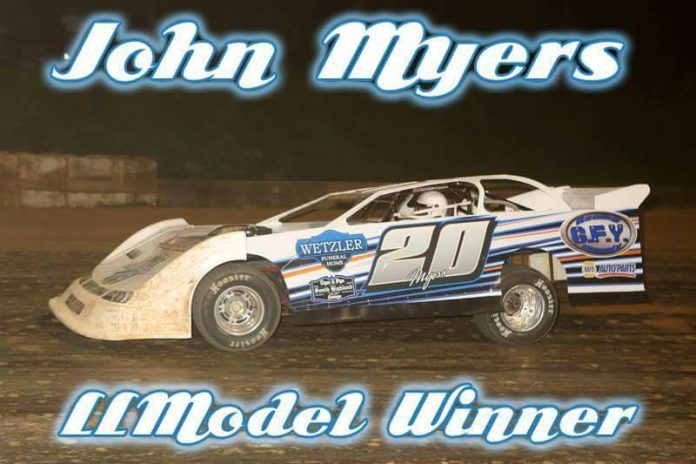 MILL HALL, PA – Kyle Ganoe of Thompson, Pa., scored his first ever win at CCMS on Friday night in the IMCA Auto Barn sprints, while John Myers of Lock Haven, PA., scored his first win in two years in the C&E Containers, Fryeco Racing limited late models, with Kevin VanamBurg of Lock Haven, Pa., getting the TC Transport Inc.  Pro Stock non-stop feature.  Other winners were Jeff Weaver in the 270 with Eric and Aaron Luzier getting the feature wins in the Glenn Hawbaker FWD Four-Cylinders double features. Next week CCMS will be back in action on Friday May 26th with another five-division show of Limited Late Models, Pro-Stocks FWD Four-Cylinders, along with the 270 and 600 Micro-Sprints. Gates open at 5p.m. with racing starting at 7:30p.m.

Kyle Ganoe led from flag to flag  to win his first ever CCMS IMCA 305 sprint car feature in the 20-lap event, but had to hold off Ken Duke for the whole race and a close car on the last lap.

“I felt Ken hit me on the rear end going into the third turn on the last lap, and I knew I better get on it.  It feels good to get my first ever win here, and I hope it is the first of many”.  “The car was not good early and me and my Dad worked on it all night to get it right.  I can’t thank him enough, because if not for him I would not be doing this, I spent all week in North Carolina working, it has been a stressful week.  I was still on the laptop at 6p.m. working”.

Defending track champ Scott Lutz drove to a third-place finish with sixth starting Ryan Lynn and Dale Schweikert.  The race was slowed by one caution on lap 8 for a spin by Mike Wenrick. Heats went to Lutz and Schweikert.

JR toner led the first lap of the non-stop 25-lap limited late model feature, before John Myers nose ahead on lap two.  The two- raced side by side for half the race, before John took control and raced to his first win in two years.  JR Toner won the heated battle that raged for most of the race for second.  JR and Luke Hoffner and last week’s winner Jim Yoder staged a classis battle for the second spot, before JR edged away near the end of the race.


“The car was working great, but near the end it was a little nerve racking with the lapped cars.  I really have to thank my wife she has helped me by putting a ton of money into this racecar, plus I get a lot of help from my Brother and my brother-in-law, it is time we get something together here”.

John got the win in his Masterbilt #20, and got the win on the dad his son mason was celebrating his birthday.  After Toner for second came Luke Hoffner, Jim Yoder and 13th starting Dylan Yoder was fifth.  Heats went to Jim Yoder and Hoffner

Kevin VanamBurg just made his return to racing this year after sitting out a few season, and in his second night of racing picked up the 15t-lap Pro-Stock feature win that also went non-stop. AY Schilling moved into the second spot on lap three from Al Rishel, and gave a number of challenges to VanamBurg, but had to settle for second.  Chris Snyder came from eighth starting spot to get third with Al Rishel and last week’s winner Noah Jensen fifth.  Heats went to VanamBurg and Schilling

In the make-up 12-lap FWD Four-Cylinder feature Eric Luzier drove to a hard earn win by holding off Cody Stover A caution slowed the action on lap nine, but Eric was able to get a good restart and pull away for the victory over Stover, with Adam Campbell Ryan Miller and Scott Hamilton in the top five.

In the regular 12-lap feature it was last years track champion Aaron Luzier, who came from last place starting spot to get the win.  Mike Campbell and Cody Stover raced side by side in early part of the feature, before Aaron moved into the battle on lap five. On lap nine Aaron made the winning pass on Mike  Campbell to win the non-stop feature event. Adam Campbell slipped past his uncle late in the race to get second with Mike third, Eric Luzier and Ryan Miller in the top five.  Heats went to Eric and Aaron Luzier.

Jeff Weaver early in the 270-micro sprint feature, until sixth starting Quinn Roberts took over the spot-on lap five.  Last year’s track champion and last week’s feature Mason Peters into the second sapot on lap seven and was challenging leader Roberts for the top spot.  Things changed dramatically on a lap 12 restart, when the two front runners got hooked together to bring out the caution, and handing the led back to Weaver.  Jeff led the final three laps to score the win over 20th starting Skeetz Hockenbrock, Troy Whitesel, Dave Hawkins and Jeff Gyurina.  The race was slowed by two red flags for flips by Jon Willimas and Bryce Craft, no injuries were reported to either driver. Heats went to Hawkins, Bryce Craft and Roberts