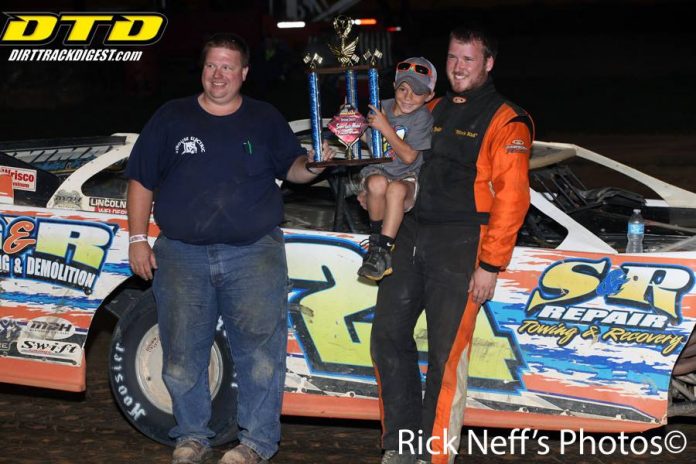 MILL HALL, PA – Jim Yoder of Selinsgrove, Pa. came out on top in the C&E Containers, Freyco Racing Limited late model feature last Friday night at CCMS.  Other winners were AY Schilling of Jersey Shore in the T&C Transportation Pro- Stocks, Eric Boozel of McVeytown, Pa.  and Ryan Miller of Howard, Pa. in the Glenn Hawbaker FWD Four-Cylinders.  Micro-sprint action found Jake Hummel of Sunbury, Pa. getting his first ever win at the speedway in the 600’s while Quinn Roberts of Berwick, Pa. won the 270 Micro-sprint feature.  Next Friday night June 2nd the first of two appearances by the Mason-Dixon limited late model series will be in action, along with the FWD Four-cylinders, and 270 and 60 micro sprints.

In the Limited late model feature event Jim Yoder drove to is second win in three weeks, and in doing so set a new unofficial 25-lap nonstop track record of 6:50.305. Pole sitter Jeremy Ohl of Jersey Shore set the pace for the first two laps of the feature with Mike Smith, of Renova, Pa., using the outside of the racing surface to grab the lead on lap three, Smith held that spot until Ohl went back underneath him on lap nine to retake the lead.  Jim Yoder was hang close in the third spot, until lap 13 when he went to the outside of Smith for second spot and one lap later, again using the high part of the track, passed Ohl for lead on lap 14, and lead the rest of the way. Jim is racing an older MBH racecar that his son Dylan use to race.

“This is a really god car, it seems to really work good here, we ran it at a few other places and we did ok, then after the practice they had here we changed one thing, on the car and it has been good ever since”, noted Jim.

“I have to thank S&R repairs, Fogelman trucking G&R excavating, Strouse electric, Miller racing engines, and my crew a wife, I could not do this without all the help”, Jim concluded.


Jeremy Ohl held on for second, with 10th starting Matt Cochran charging to a third-place finish, then came Denny Fourney and Mike Smith.  Heats for the 13 limited went to Yoder and Luke Hoffner.

AY Schilling lead from flag to flag in the non-stop 15-lap pro stock feature event with a time of 4:28.261 to break the track record also, to became the third different winner in the first three weeks of the season.  Al Rishel, Chris Snyder, and Tommy Dawson battle for second the whole race until the final lap, when Snyder edged by Rishel for the second spot with Rishel third, Dawson fourth, and last week’s winner Kevin Vanamburg fifth.  Single heat went to Dawson.

In the 20-car field FWD four-cylinders, all twenty driver raced with two winners in the feature one for the regulars of the speedway and the other was for an open class of drivers that were on hand to race.  Ryan Miller of Howard, Pa. claimed the top spot for the regulars in the 12-lap feature, holding off Aaron Luzier for the win with Eric Luzier third, Sam Creveling and Kyle Workman in the top five. Eric Boozel led al 12-laps of the feature to win the open class part of the event beating Chris Anderson, Anthony Varner, Kent Leonard and Justin Williamson. Heats went to Anderson, Boozel and Mike Campbell.

Jake Hummel started fifth in the 600-micro feature, and was hanging around the fourth spot for most of the non-stop feature event, when on lap nine he made the move around Erick Knopp for third on lap nine.  With two laps to go Jake passed second running Josh Beamer for the spot and set his sights on leader Jeff Weaver, who held that spot for the start of the race.  Going into the second turn on the checkered flag lap Jake made an inside pass of Weaver and went on to score his first ever CCMS feature. The time of the event was 3:49.630 for an official track record.  Weaver held on for second with Beamer third, Knopp fourth and Adam Nicholson fifth.  Heat went to Weaver.

In the 270-micro sprint feature Quinn Roberts made up for last week’s disappointment to pick up the win.  Mason Peters lead the first nine laps of the feature with Luke Kroboth following in his tracks, until lap nine when his #8 broke.  Roberts who started in the 13th spot in the feature, after having problems in his heat race, was moving up through the field quickly. On lap five, he had worked his way into fifth spot. Then after the lap nine-caution, he found himself in second spot. Just after the restart, Quinn made the winning pass and lead the final five laps of the feature to become the third different winner in three races. Mason Peters, Troy Whitesel, Jeff Weaver and Jeff Gyurina completed the top five.  Heats for the 18 micros went to Kroboth and Weaver.

CCMS speedway is located off exit 178 on route 80 at 98 racetrack Rd. Mill Hall Pa., you can also check them out at clintoncountymotorspeedway.com or like us on Facebook and or follow live on Twitter.  You can also check timing and results on Mylaps.com.