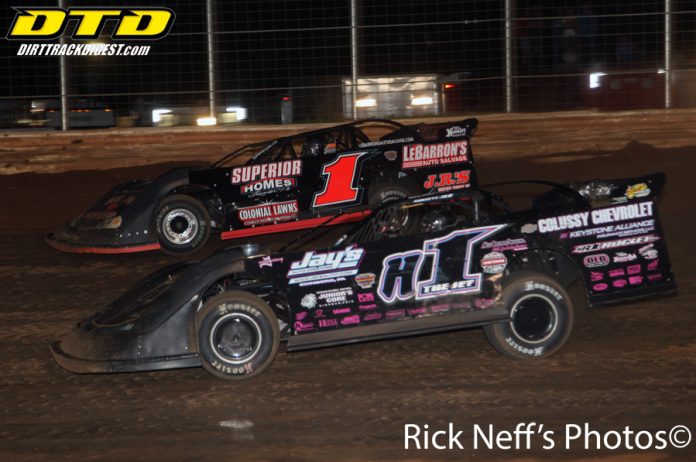 By Brad Vores for Susquehanna Speedway

YORK HAVEN, PA – If anyone can get around Susquehanna Speedway it is Gene Knaub.

The Dover, PA driver proved that Thursday night as he swept both the Creekside Auto Sales Ernie D’s Appalachian Mountain Late Model Speedweek feature and then came back to score the win in the Bernheisel Race Cars 358 Late Model feature.

Knaub lined up on the front row of the Appalachian Mountain Late Model Speedweek event and quickly shot into the lead over Keith Jackson. Knaub would lead the first six laps before fourth-starting Jared Miley took the top spot.

Miley’s lead was short-lived, leading just one lap before giving way to Knaub on the eighth circuit as Knaub then led the rest of the way to score the big $4,000 payday in the 40-lap main.

A late race caution on lap 29 would close the field on the veteran but Knaub was strong in scoring his first career Late Model Speedweek feature win aboard the Superior Homes, Lebarron’s Auto Salvage, JRs Driveway, Route 30 Seafood, 382 Auto Sales sponsored No. 1.

Miley paced the 43-car super late model field in time trials with a lap of 17.795 seconds.

Heats were won by Knaub, Jackson, Rine and Pettyjohn with Matt Cosner and Shaun Jones splitting the double B-Main’s.

Knaub’s big night continued when he came back to capture the win in the 25-lap BRC 358 Late Model feature.

Knaub, Christine and Weaver were heat race winners for the 24 358 late models.

Susquehanna Speedway will be dark this Saturday, June 3 but returns to action with a special Thursday night program on Thursday, June 8 as the BAPS Auto Paints and Supplies 410 Sprint Series takes center stage for the third race in the seven race series. IT will be Sprintcarunlimited.com night at the speedway as the Freedmont® Mortgage Lending PASS/IMCA 305 Sprints join the BAPS 410 Sprints.  Race time is 7PM.

Then on Saturday, June 10, it will be the FK Rod Ends Carl Billet Memorial for the Bernheisel Race Cars 358 Late Models. The Billet Memorial will pay $1,500 to win for the 30-lap event. The Super Sportsman, Street Stocks and Extreme Stocks fill out the racing program. Race time is 7PM.

Did Not Start: 3B Cameron Benyou