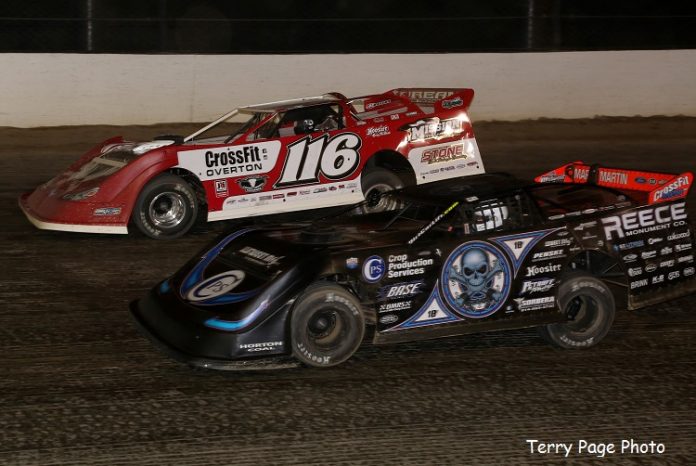 ROSSBURG, OHIO — Scott Bloomquist powered around the outside of Brandon Overton on lap 55 and cruised the rest of the way to a dominating win for his 7th career victory in the $100,00 to-win Dirt Late Model Dream presented by Ferris Mowers at Eldora Speedway on Saturday night.

“It’s like all these big shows, you are just glad they are over with,” Bloomquist said. “Mission accomplished!”

Bloomquist, of Mooreseburg, Tennessee, started in the seventh position after finishing in second-place in the opening heat race and methodically worked his way forward from the drop of the green flag.

He cracked the top-five on lap eight and moved to fourth-place when Mason Zeigler, who was running in the top five, brought out the first caution flag when he slowed with a flat tire on lap 12. On the double-file restart, Bloomquist jumped to the runner-up position behind leader Brandon Overton.

Bloomquist swapped the second-position with Brandon Sheppard three times over the next 40 laps before finally shaking free of the Illinois driver on lap 53.

Two laps later the 53-year old Bloomquist made the winning move around Overton and was never seriously challenged the remaining 45 laps building as much as an eight second lead in the closing stages of the event.

“This has always been one of my favorite places to race ever since I first came here in 1988,” Bloomquist said. “It is such a beautiful race track and you can race all over it from the inside wall to the outside wall. I can’t say enough for how these guys prep a race track. There were a few little bumps but that just gave the track character.”

Bloomquist took his time with lapped traffic late in the race and crossed the finish line 4.5 seconds ahead of Sheppard who won a spirited battle with Overton for the runner-up position.

“I wasn’t really sure (how big the lead was), then I got to some of the lapped traffic and the 18 car and I about had him cleared; our air got a little messed up and I got loose so I backed off a little bit and tried not to get too much heat in the tires. That would have cost us more than anything,” Bloomquist said.

Sheppard’s runner-up finish and Overton’s third-place finish were career best runs in the Dream for both of the young drivers.

“That was a fun race there with Brandon (Overton). We always race each other clean, so it was fun racing with him and congratulations to Scott. He was pretty good,” Sheppard, 24 years old of New Berlin, Illinois said. “Once me and Brandon got the line figured out that we wanted to run, we were already too far behind.”

“That’s not too bad at all. We will take that,” Overton, 26 years old of Evans, Georgia, said. “Congratulations to Scott. If we are going to lose, these are the two to lose to. Me and Brandon raced each other as clean as we could. We faded a little bit but to get out there and lead we are all tickled to death. I want to thank all the fans here and back in Georgia. This place is pretty cool.”

Kent Robinson led the first 11 laps of the main event from his outside front-row starting position before giving way to Overton who led laps 12-55. After that it was all Bloomquist.

“It’s awesome to win here,” Bloomquist said. “We have a lot of fans and a lot of naysayers but that’s what makes it all go around.”

Heat races were won by Mars, Shannon Babb, Zeigler, Overton, Robinson and Marlar. B-mains were won by Dale McDowell and Jon Henry. The exciting B-mains were highlighted by defending World 100 winner Bobby Pierce charging from 24th starting position to a thrilling fourth-place finish and the final starting spot in the 28-car feature line-up. The B-main scrambles for cars that failed to qualify for the main event were captured by Eddie Carrier, Jr. and Brian Shirley.

Eldora officials turn their attention to the open wheel winged sprint cars next Saturday night, June 17th. The Arctic Cat All Star Circuit of Champions return to “World’s Greatest Dirt Track” for the 2nd leg of Ohio Sprint Speedweek presented by Casey General Stores. Gates will open at 4:00 PM with hot laps at 6:00 PM and the first heat race will take the green flag at 7:30 PM.