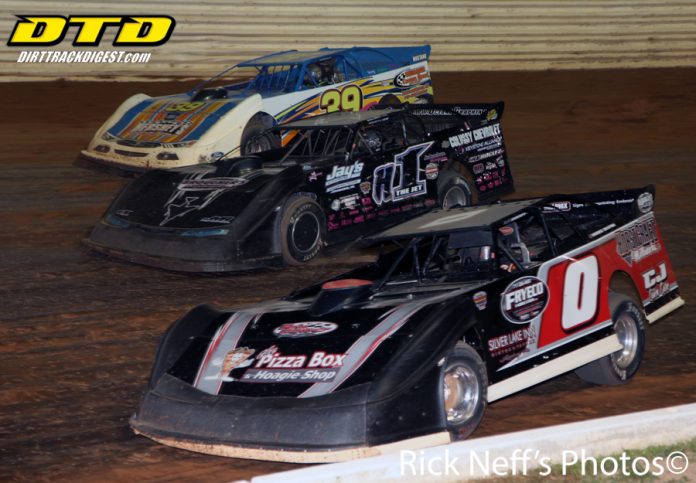 MILL HALL, PA – It was a night for the number zero to shine has both super late and IMCA sprint feature winners had that number on the side of their cars. In the Fogelman Garage super late models Coleby Frye of Dover, PA, got by Waylon Wagner late in the 25-lap feature Friday night at Clinton County Motor Speedway.  The IMCA Auto Barn sprint feature went to Kyle Ganoe of Thompsontown PA, who scored his second win in four starts this year.  Kolton Wagner son of Waylon won the FWD Four-Cylinder Glenn Hawbaker Inc. sponsored feature, with Ross Perchchak, of Hazelton, PA, picking up the win in the 270-micro-sprints on Stocker Chevrolet night.  CCMS is back in action next Friday July 28th with a five-division show of C&E Containers, Fryeco Racing Limited late models, Auto Barn IMCA sprints, FWD Four-cylinders, and both 270 and 600 micro sprints.

Waylon Wagner of Lewistown PA, got the jump at the start of the super late model feature from his pole position, holding off attempts of both Tyler Horst and Hayes Mattern.  Seventh starting Coleby Frye was working his way towards the front, with the aid of a few cautions. On the fifteen lap Frye nosed past Horst for the second spot and set is sites on the leader.  On lap nineteen Frye and Wagner got tangled up and Jim Yoder slipped by for the lead from 18th starting spot, but before the lap was complete a caution for a spun car stopped the action, placing Wagner back in front.  Then on la twenty-one Frye made an outside pass of Wagner to get the lead and the win, driving his XR1 Rocket with a Hershey racing engine under the hood.

“We have a had a number of top five’s this year, and I thought we were in for another, but the outside opened up and we got by Waylon for the win”, noted Frye. “We got together on the back streach, and I did not want to wreck either of us and then Jim got by both of us, that caution saved us”, said Frye.

Wagner held on for second with Jim Yoder third, Tyler Horst was fourth, with Dylan Yoder who had to the back of the field during the first caution came back to finish fifth.  Heats for the 18-car field went to Wagner and Dylan Yoder


Ryan Lynn of Holidaysburg, PA, led the first five laps of the IMCA sprint car feature, before fifth starting Kyle Ganoe took the led away on lap six and drove away from the rest of the field for his second CCMS win this season.

“So far, this year things have going well for my team, we have good finishes on most nights, and to get are second win here with a strong field on the track tonight, makes even better”, stated Kyle.   “I have to thank my Dad and my crew for all the time they put in getting this car ready to race, I could not do this without them”, added Kyle.

Dale Schweikart made lap fourteen pass to get second with Scott Lutz nipping Ryan Lynn for third at the line; Jared Zionkowski was fifth.  Heats for the 21-car field went to Scott Lutz, Ganoe and Jim Kennedy.

When Kolton Wagner arrived at the track Friday night his plans where to help his Dad Waylon with his super late model.  When Mike Campbell was not able to drive his own #43 he asked Kolton to help him out.  Kolton from his second starting spot was chasing pole sitter Cody Stover most of the race in the five and sometimes six car battles at the front.  Kolton got the lead on lap nine, at the same time Stover and Tim Raup got together with Stover suffering a flat tire and was out of the race.  Wagner held on for the win with Raup chasing him right to the finish for second with Justin Williamson third followed by Eric Luzier and Aaron Luzier.  Heats for the 16-car field went to Raup and Wagner.

After getting the lead from Lance Spotts on lap five, Ross Perchak drove away to the win on his first visit to the speedway this year.  Ross held on after two cautions slowed the race, but he could pull away each time to collect the feature win.  Sone Keler made a last lap pass of Spotts for second with Jeff Weaver and Austion Pasquerella in the top five.  Heats for the 25-car field went to Weaver, Perchak and Spotts.