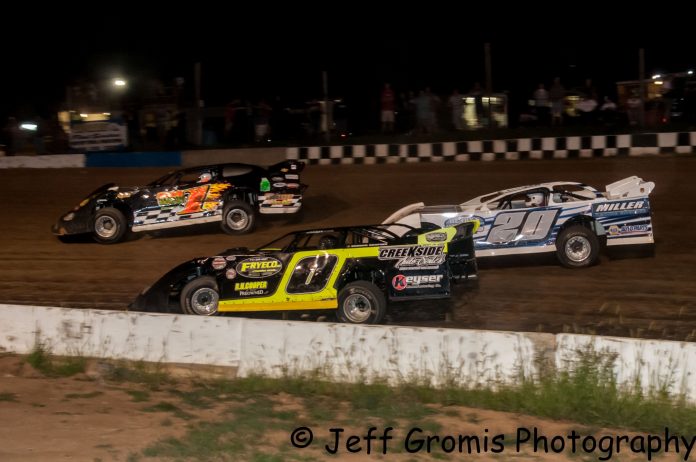 MILL HALL, PA – It was just announced that on Friday August 4th the super late models racing at Clinton County Motor Speedway on that night will be racing for $5,000 to win on Strouse Electric of Howard, PA. night at the speedway. Also racing that night will be the T&C Transport Inc. Pro-Stocks the Glenn Hawbaker Inc. Front wheel drive four-cylinders, along with an appearance by the EMMR Vintage car club. Fogelman’s Garage is the four-race sponsor for the super late model class for the 2017 season.

On Friday July 21st Coleby Frye of Dover, PA. scored the 25-lap feature event win over Waylon Wagner of Lewistown, PA. A similar purse was paid for an August 19th race in 2016 with Dylan Yoder of Middleburg, PA. picking up the win over Frye. Other super late model events scheduled for this year will take place on Friday September 22nd and on Saturday October 14th.

Thanks to the efforts of G&R Excavating and Demolition of Tyrone, PA., along with S&R Repair of Milesburg, PA. and Towing, and Robbins Septic of Julian, PA. the extra cash has been secured for this event, which have drivers draw pills for the heat races with the top heat finishes redrawing for the feature, which will run for 35-laps. This race will run in conjunction with the annual Clinton County Fair, which runs from July 28th thru August 5th. A special Wednesday night micro-sprint racing program will also be run, with the 600, 270, and 125 micros in action.

Track gates will open at 5pm with war-ups set for 7pm and racing at 7:30pm for this Friday night special even. CCMS is located off exit 178 on interstate 80 to 98 Racetrack Road Mill Hall, PA. 17751, or check us out on the web for more information at www.clintoncountymotorspeedway.com, or check us out on Facebook. We can also be reached by calling the track at 1-570-971-2126