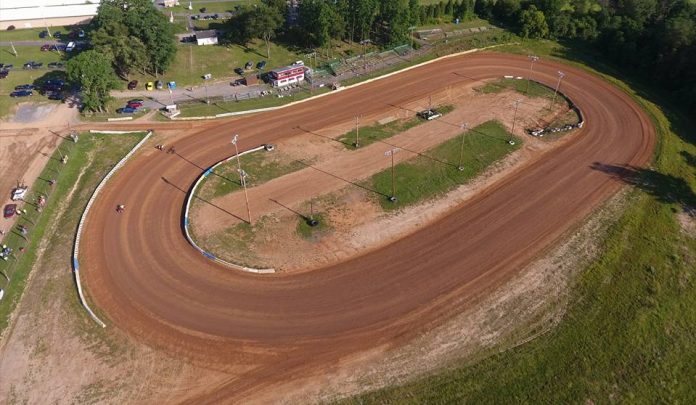 MILL HALL, PA – After having four of five races rained out over the last month, CCMS had come back and run two straight programs in a row. Friday night July 28th, with the rain closing in the staff and management ran a tight quick show and beta the incoming rain with four of the five features getting completed before showers began to fall, pushing the FWD four-cylinder back to Friday August 4th. Along with two features for the Glenn Hawbaker Inc. FWD cars, the Fogelman Garage super late models will make their second appearance of the season, with a $5,000 to win 35-lap feature event. The T&C Transport Inc. pro-stocks will also be in action along with EMMR Vintage cars on Strouse Electric night.

Jim Yoder of Selinsgrove, PA drove to his third limited late model win of the season, in the 25-lap C&E Containers/Fryeco racing sponsored class, with Tyler Reeser of Orwigsburg, PA scored the 20-lap IMCA Auto Barn sponsored, sprint car feature win in his first ever appearance at the track, with Jeff Weaver of Lock Haven scoring double wins, with the 600 and 270 micro-sprints car feature wins both 15-laps events.

Mike Smith of Renovo, PA jumped out the early lead in the limited late model feature, pulling away from second place Denny Fourney. Mike survived three caution flags in the first four laps of the feature and could pull away each time. Then on lap five Jim Yoder from his sixth starting spot moved to the inside of Smith a took the top spot away, at the same time Smith developed problems and slipped back through the field. Jim could put some distance between him and the rest of the field until a caution on lap fifteen, for a spin by Kenny Yoder (No Relation). On the restart Jim’s nephew Andrew Yoder from his 11th starting spot challenged Jim for a couple of laps, but Jim has a stronger car and pulled away for his third win of the season by 1.462 seconds.

“I really like coming here to race, we missed a couple weeks, because we went and ran some other tracks, it just isn’t the same when you don’t race here, should have stay here instead of running other places, but I’m glad to back”, stated Jim. “I saw someone underneath me, and did not realize it was Andrew, but I was able to get a good bite of the corner and drive off”, noted Jim.

Tyler Reeser had never even seen CCMS let along race at the speedway, and that all changed Friday night with Tyler with Tyler getting a good look at the track, leading all 20-laps of the IMCA sprint car feature. With the luck of the redraw for the feature Tyler drew pill number 1 and led the whole way in the non-stop feature event.

“The track was pretty fun to race on tonight, we got on the top side and it was really slick coming off the corner, and it was a lot of fun to race up their”, said Tyler, “I did not think it would be this fun, on a small bull ring like it is, I like racing them and the bigger half-mile tracks”. “I know for sure we will be here for some of the other races that are raced here, it was a blast racing here”, commented Tyler.

Ken Duke made a late race charge from his 8th starting spot to settle for second, with Cale Reigle Zach Newlin and 11th starting Ryan Lynn in the top five. Eats for the 17-car field went to Jim Kennedy and Scott Lutz. The non-stop race was run in a time of 5:17.458

A big night for Jeff Weaver scoring is third win of the season in the 270-micro sprints, and then coming back and winning his first of the year in the 600 micro-sprint features.

Between both feature Jeff lead 29 of the 30-laps that where raced. In the 270 feature Jeff jumped into the lead on the first lap from his pole position, holding off the charges of Stone Keller who was keeping in striking distance in the early going. Troy Whitesel got into the mix after a lap ten caution, and drove past Keller for second, but could not gain on the leader. Weaver won by 1.737 seconds over Stone Keller who made a fourth corner pass to get back to second, with Whitesel third, followed by Mason Peters and 12th starting John Roberts. Heats for 19-car field went to Keller and Weaver.

In the 600- micro feature Dylan Anderson led the first lap before weaver from is third starting spot took over, holding off the challenges of Jake Hummel who sped into second on the third lap and doged Jeff the rest of the race. The two stayed that way from lap three until the finishes surviving two cautions flags during the 15-lap feature, Weaver won this race by 0.950 seconds over Hummel, with 7ths starting Josh Beamer third with Anderson fourth and 11th starting Chad Thomas fifth. Heats for the 18-car field went to Shane Penny and Dylan Anderson.

Before the rains came two heats races where run for the FWD four-cylinder class with wins going to Kolton Wagner and Tim Raup.