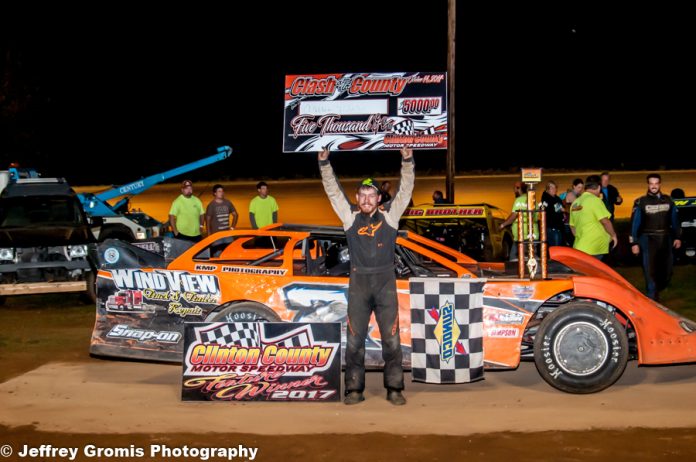 MILL HALL, PA – Andrew Yoder of Middleburg, score his biggest pay check in his racing career so far by winning the super late model special on Saturday night October 14th at the Clinton County Motor Speedway over a stellar field of 51 drivers that signed in for the special racing program. Other winners included Shaun Lawton, of Bloomsburg, Pa. in the Pro-Stocks, Chris Anderson, of Rockhill Furance, Pa. in the FWD four-Cylinders, and Dave Hawkins, of Lower Burrell, Pa. in the 270-micro sprints. The race closed out the 2017 racing season at Clinton County Motor Speedway.

At the start of the 50-lap feature for the super late models, pole sitter Andy Fries of Mercersburg, Pa. jump out to the early lead. Fries was closing in on some lapped traffic when the first caution flag fell on lap six for a stopped Dave Hess, Jr. after another lap was completed Walker Arthur came to a stop on the back stretch giving up his sixth place running spot, he was out of the race. In the time Travis Strickley of Keyser, W.V. came on strong from his fifth starting spot to challenge Fries for the lead. Travis made his pass on the eighth lap and was pulling away from the field. Another caution came out for a spin by Waylon Wagner on the 15th lap wiping out the Hugh advantage for Travis. After the restart Travis again to pull away to a big lead until he came to a stop on the backstretch after losing his driveshaft. This handed the lead back to Andy Fries who held the top spot now over fast closing and third starting Andre Yoder who was fining his rhythm and closing in on the leader. Lap after lap Andrew keep getting closer and closer to Fries and was racing side by side for a number of laps before edging ahead on lap 36. Fries stayed with Andrew and made a last ditch effort to grab the lead back, but Andrew was moving away and started to extend his lead. The lead did look safe for a couple of laps, before 15th starting Matt Cochran started to inch his way to the front. Matt worked is way into the top five on lap 31 and was in a five car battle for spots, which keep changing lap after lap. Matt cleared al the cars and drove into second spot on the 39th lap, and set his sights on the leader. Matt was closing the gap until he caught the inside wall which slowed him down. With that Andrew was able to pull away and score the 50-lap feature win, and was a first lost for words to talk about his big win.

“I really don’t know what to say right now, this is awesome. MY first super late model win could not have come at a better place to do it, all the fans that are hear tonight. Great racing, Andy Fries gave me room when I got the nose of my car beside him. This is the same as my limited races, just was bidding my top on the bottom of the track,” noted Andrew.

“That last long run I just got a good rhythm, I did not know if anyone was close to me, but I don’t care I just won,” Noted Andrew.


Andrew had a choice of racing either his super or Limited and kick the idea around all week, and then decided on the super car.

“I have to thank Ed Powell he gave us a car and motor, the only thing I put n it is tires and fuel. I can’t thank him enough for giving me this opportunity to come out and do this in super late models,” commented Yoder.

“I thought I was catching him until I made some contact with the wall down in the corner in three and four, then I just got myself out of rhythm, and I had a tire going down, I started to get a little tight coming off the turn,” noted Matt. “This car was a rocket ship tonight, but I was getting worried about fuel, because when you run alcohol you only get so many laps with that, but I was glad I could make this happen with the little 358 motor.”

“We struggled a bit with this Club 29 car but towards the end of the season we have now got it dialed in,” said Matt.

Coming from the tenth sot to finish third was Dan Stone of Thompson, a. who was driving the Ron Coleman #72.

“This place is awesome I cant believe the improvement that they have done here, it’s racy and you cannot beat that,” stated Dan. “The car was god tonight, we where a little off, I think Ron has changed motors like nine times, and this is only the second time we have finished a race, in that car in two years.  Will take it, it was a god run for us, I had a blast, everyone was racing me clean, congrats to Andrew he as to be tickled to death, this is his home track.”

In the 18-lap Pro-Stock feature Shaun Lawton from his fifth starting spot roared to the lead on the first lap, but had to contained with challenges from Tommy Dawson and Johnny Bouse who each took turns and getting alongside the leader for the most part of the race. Dawson gave it the first challenge from laps one though five before Johnny Bouse went after the leader. Nothing was going to slow down Lawton as he was determined to get the win, with his first race at the track this year. Lawton was quick to thank all who helped him get the feature win” like to than Campbell chassis, racing technology shocks, Mapco machine shop engines, Tim Steve and Adam have done great things with this car. I just have it keep it straight”. Said Shaun who collected $500 for the win. Bouse held on for second with Noah Jensen coming on strong at the end to collect third, Tommy Dawson was fourth with Brad Mitch fifth. Rounded out the top ten in the race that went non-stop were Amber Mills, Rich Fye, Peanut Heintzelman, Bill Conrad and Butch Braim. Heats went to Lawton and AY Schilling

In the 15-lap FWD four-cylinders feature Chris Anderson drove from his third starting spot and took the lead with a sweeping move off the four turn on the first lap and never looked back to score the feature win and collect the $300 tp prize. Justin Williamson tried to stay close to the leader, but could not get close enough to make a move and settled for second, in the event that had three cautions. Travis Semple was third with Tim Raup, and Andy Proper fifth. rounded out the top ten were Kolton Wagner, John Bower, Dale Varner, Sam Creveling and Anthony Varner. Heats went to Anderson and Williamson

In the 15-lap micro sprint feature Troy Whitesel led the first three laps of the feature before fourth starting Dave Hawkins drove to the front and never looked back to score his first win of the season at CCMS. “It takes us about three and a half hours to drive here and race and we do tat a couple times a year, to support the speedway”. Said Dave. Hawkins collect the $400 top prize over Troy Whitesel, with Lance Spotts third, and Jeff Gyurina and Bryce Craft in the tp five. Rounding out the tp ten were Don Werner, John Bower, John Fritz, Dan Wertman, and John Williams. Heat races for the 22 car field went to Craft, Spotts, and Whitesel.