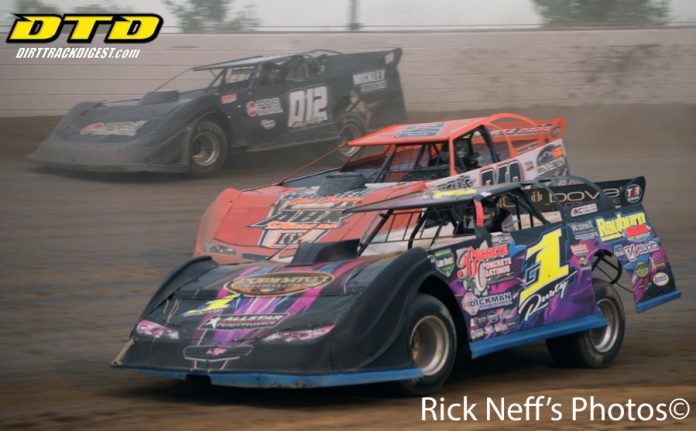 MANSFIELD, OH – The Super Late Model division will have a new mega-event next year with the introduction of the “Dirt Million” on Aug. 24-25, 2018, at Mansfield Motor Speedway, track promoter Cody Sommer announced.

Super Late Model drivers will compete for a minimum of $100,000 to win and $2,000 to start in the inaugural Dirt Million at the 4/10-mile oval, but the purse will continue to increase throughout the 2018 calendar year via a unique format and promotion that allows dirt racing families, friends, sponsors, fans and teams everywhere in the world to play a role in building the feature’s payoff. The total purse for the event can climb to a spectacular $1 million, which would result in the weekend’s A-main offering a $500,000 winner’s prize and $10,000 just to take the green flag.  Under a unique format, the Dirt Million will be a part of the 2018 Lucas Oil Late Model Dirt Series schedule.

The Dirt Million becomes the latest addition to Sommer’s growing promotional resume, which also includes the VP Racing Fuels Gateway Dirt Nationals held in the Dome at America’s Center in downtown St Louis, Mo., and the $100,000-to-win Sprint Car World Championship set for April 27-28, 2018, at Mansfield. This year Sommer spearheaded the transformation of Mansfield Motor Speedway from an asphalt track that hosted crowds of over 20,000 fans for NASCAR Truck Series races to a world-class dirt facility by presenting several special events, including a Lucas Oil Late Model Dirt Series program in July.

Sommer sees the creation of the Dirt Million and its unprecedented purse-building setup as possibly being a snapshot into the future of the sport.

“We live in a world today where individual people are more social, expressive and impactful than ever before,” Sommer said. “This event is catered to that fact and it will be very rewarding to watch the sport rally together, unified with one common goal.


“This event is truly one that rewards individuals for showing their support and getting behind something — literally the more it escalates the more it helps everyone, especially how it gives back to the racer.”

Sommer has billed the Dirt Million as an event “for the racers, by the fans.” He said virtually every aspect of the blockbuster will have a contributing element.

For starters, every driver registering for the event will become part of the event’s contribution system through a profile page at DirtMillion.com. Anyone who decides to support the race — by buying an event ticket, event merchandise, making a cash contribution directly to the purse or even paying a driver’s entry fee or pit pass — can specify the driver in whose name they’re contributing; the drivers who receive the most support will be in line for event benefits, including possible provisional starting spots for the headliner.

In addition, a portion of every ticket, camping reservation, VIP suite and pay-per-view video package sold will go directly to the growing purse, making the payoff ever-more lucrative. Simply stated, the more fans that attend the Dirt Million, the bigger the purse will be, providing incentive for drivers and teams to promote, endorse and support the event because their own fans’ investment in purchasing a ticket will help them as racers directly.

“If I was to explain this in the simplest way possible to a racer right in front of me, it’s this: The more you yourself, sponsors and fans support this event, the more money you are going to be able to race for,” Sommer said. “What is extremely ironic and not normal at all is that I am essentially putting a rev-limiter on the promoter side. There are plenty of events where a promoter packs the place and walks out with substantially more money than the guy that won the race, and the bottom line is this event is just not one of those events and it is not going to be through its design.”

Sommer said the guaranteed $100,000-to-win/$2,000-to-start purse totals $200,000 but the final payoff come race day will rise even higher. Each position in the 28-car field will increase by a corresponding percentage of the financial contributions that accumulate for the event, meaning that for every dollar contributed 50 percent will be added to the winner’s payoff; 10 percent to second place; 5 percent to third place; 3 percent to fourth place; 2 percent to fifth place; and downward to 1 percent for last place.

In the coming months additional details for the event will be released. Also soon to come will be the launch of DirtMillion.com, which will be the hub for the sport to watch the event’s purse grow in real time and include the registered driver profile pages amongst many other unique features.

Dirt Million event management is encouraging all fans and teams to follow their social pages on Twitter @DirtMillion and Facebook.com/DirtMillion. The event website will be launched soon at www.DirtMillion.com.