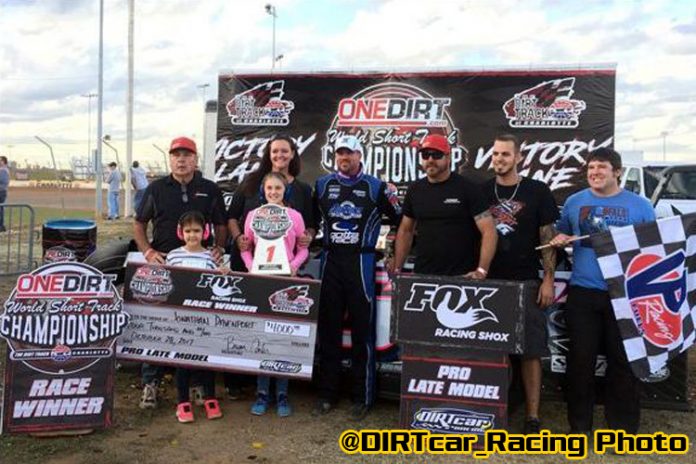 CHARLOTTE, NC – Jonathan Davenport was back behind the wheel of a Longhorn Chassis on Saturday at The Dirt Track at Charlotte for the World Short Track Championship.  Davenport was able to wheel his No. 6 to the victory in the Pro-Late Model division.

“It was around Thursday at 1:00 p.m. that we decided to come here and do this,” Davenport said in Victory Lane. “I’m glad to get back on a Longhorn Chassis and get a feel of it, and it was pretty good. Matt Long was the class of this field, and I’m not sure whether I would have been able to get him, but his misfortune was my fortune.”

North Carolina local Long opened up a commanding advantage early in the 30-lap event, walking away from Max Blair and sixth starting Davenport. With racing clean and green early, Long was able to run away and hide, darting through lapped traffic as Blair, Davenport, and Kyle Bronson waged war for third.

At halfway, it appeared Long would have an easy time cruising to the big $4,000 payday in the Pro Late Models.

With 18 laps in, Kyle Bronson stole third for Blair, but even more importantly, Long broke and pulled into the infield. Davenport inherited the lead, and once in the lead, walked away from the duo of Bronson and Blair that continued to swap spots.


A yellow with three laps remaining brought Bronson and Blair back to the rear tailgate of Davenport, but it was all for naught, as Davenport claimed the win by a car length over Kyle Bronson, Max Blair, and Benji Hicks.