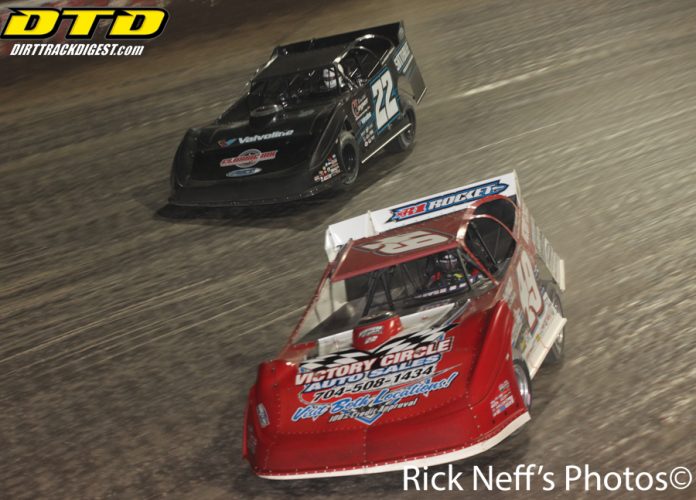 This will be the 65th consecutive year of operation for the storied half-mile oval located in northern Darke County (Ohio) founded by the late Earl Baltes and his wife Berneice. The speedway has been owned by motorsports entrepreneur and former NASCAR, IndyCar and USAC driving champion Tony Stewart since November 2004.

As previously announced in late May, the 24th running of the $100,000-to-win Dirt Late Model Dream Weekend will be contested Thursday-Friday-Saturday, June 7-8-9, while the 35th annual $50,000-to-win Kings Royal Weekend featuring the World of Outlaws Craftsman Sprint Car Series will be held on Thursday-Friday-Saturday, July 12-13-14. The sixth annual Eldora Dirt Derby, the only national NASCAR series race on dirt, is scheduled for Wednesday, July 18. Tuesday Night’s practice night for the NASCAR Camping World Truck Series will have more of a local flair in 2018 with a full racing program for the DIRTcar UMP Modifieds and Eldora Stock division. The Modifieds and Stock Cars will also run Invitational Features during Wednesday’s program. And, keeping with tradition, another $1,000 has been added to the winner’s purse of the 48th annual World 100 Weekend on Thursday-Friday-Saturday, September 6-7-8. Dirt Late Model racing’s most prestigious event will award the champion a handsome $51,000 and the coveted globe trophy.

With the renewal period concluded and exclusive ‘Add & Exchange Days’ soon to begin for renewal customers, the public on-sale date for tickets and campsites to Eldora’s four largest ‘spectacle’ events, is scheduled for Saturday, December 2 at 10 a.m. Tickets and campsites will be available by phone at (937) 338-3815 and www.EldoraSpeedway.com.

The season opener will feature sprint cars as the scheduled headliner for the first-time in several years as the K&L Ready Mix NRA Sprint Invaders 360 cubic inch (c.i.) winged sprint cars make their first of three trips to Eldora on Saturday, April 21. They will be joined by the DIRTcar UMP Modifieds and Eldora Stock cars.

Exceptionally popular since its introduction, the #LetsRaceTwo Doubleheader Weekend featuring both the World of Outlaws Craftsman Sprint Car Series and USAC National Championship Sprint Cars returns on Mother’s Day Weekend. The ‘Mother of All Sprint Car Races’ is scheduled for Friday and Saturday, May 11 and 12.

Eldora has become well-known for spectacular fireworks shows and 2018 will be no different. The first of two dedicated programs will be Saturday, May 19 when Aaron’s presents $8 Family FIREWORKS Night. The DIRTcar UMP Modifieds and Stock Cars will be on the card as is tradition and the high-speed NRA 360 c.i. Sprint Invaders have been added to give area children and families their first sprint car experience. Casey’s General Stores will present the second $8 Family FIREWORKS Night on Saturday, August 4, which played to a near capacity crowd in 2017.

After nearly a month primarily focused on fenders, the wings return when Casey’s General Stores presents the second round of Ohio Sprint Speedweek on Saturday, June 16. The event is part of the kickoff weekend to the ultra-popular Arctic Cat All Star Circuit of Champions sprint cars barnstorming tour across the buckeye state.

The 37th running of the 4-Crown Nationals by NKT.tv will once again be a homecoming of all divisions open-wheel – for both the sport’s biggest stars and its youngest participants. Friday, September 21’s ‘BeFour The Crowns Showdown’ will once again showcase the World of Outlaws Craftsman Sprint Car Series with the addition of the USAC Silver Crown division qualifying. Saturday, September 22 will once again add four names to the Johnny Vance Trophy under the headings of USAC National Midget Tour, USAC National Sprint Car Championship, USAC Silver Crown Championship and the Arctic Cat All Star Series of Champions sprint cars. Hundreds of young racers from the USAC .25 Midget program will also be in action all weekend long at ‘little e’ – Eldora’s kart and .25 midget track.

The 65th season will conclude with the new “Last Call For Them All” on Saturday and Sunday, October 13 and 14 which celebrates many of Eldora’s most popular divisions sees the return of late season Sunday racing for the first-time in several years. The Saturday show will consist of the Sunoco American Late Model Series, NRA 360 Sprint Invaders and traditional non-wing sprint cars while Sunday’s card will see the World of Outlaws Craftsman Sprint Cars and DIRTcar UMP Modifieds center stage.

New in 2018 will be ‘flex-scheduling’ for the events scheduled in April, the Saturday of the 4-Crown Nationals and the #LastCallForThemAll. In the interest of track conditions and fan comfort, Eldora officials will post the final gate, event and starting schedules via social media and on the speedway’s website the week of the event after consultation with our official meteorological service.

The full 2018 Schedule of Events, including ticket pricing, is available at www.EldoraSpeedway.com/events. Tickets and campsite renewals for those events just announced will be issued after the new year and the deadline will be Wednesday, February 7 at 11:59 p.m. Tickets to these events will go on sale Monday, February 12 at 10 a.m.

About Eldora Speedway:
Since carved from a cornfield in the natural amphitheater that existed between the Eldora Ballroom and the Wabash River by bandleader and dance promoter Earl Baltes in 1954, Eldora Speedway has grown to be a frontrunner in motorsports growth and stability. Baltes chose to sell the legendary high-banked clay oval to motorsports entrepreneur and NASCAR, IndyCar and USAC driving champion Tony Stewart in 2004. Eldora will celebrate its 65th consecutive season of racing in 2018 featuring the biggest events in short-track racing, including: the 24th running of the $100,000-to-win Dirt Late Model Dream Weekend on June 7th-8th-9th; the 35th annual $50,000-to-win Kings Royal Weekend on July 12th-13th-14th; the sixth annual Eldora Dirt Derby, the only NASCAR race on dirt, Wednesday, July 18th; the 48th annual World 100 Weekend on September 6th-7th-8th; and the historic 4-Crown Nationals on September 21st and 22nd. The complete schedule for Eldora’s 2018 season, including ticket and campsite information will be posted at www.EldoraSpeedway.com. Fans can get off-season access from Eldora Speedway by following @EldoraSpeedway on Twitter, Instagram and Snapchat, hitting ‘Like’ at www.facebook.com/EldoraSpeedway and adding to nearly 6-million views of exclusive video on www.youtube.com/EldoraSpeedway.