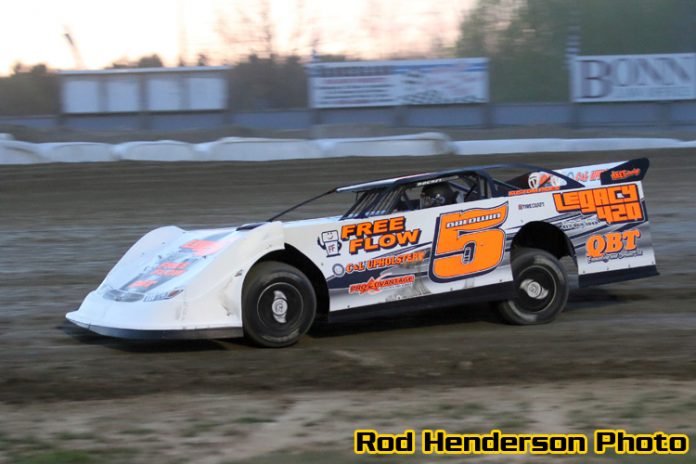 No. 5 Steve Baldwin took an early lead in the Pro Late Model feature and didn’t let up for 28 laps to take his first checkered flag of the season. He left No. 09 Robbie Wilson, No. 89 Austin King to battle out runner-up, which went to King. They had their work cut out for them holding returning champion No. 57 Charlie Sandercock in fourth spot for the last fifteen laps. Andy Mayhew picked up a fifth place finish.

Hennessy hooks two in a row


His second win of the 2018 season, didn’t come easy Saturday night as returning Canadian Modified champ No. 87 Andrew Hennessy had to move from the middle of a competitive pack hungry also for victory. Adam Whaley was fierce in his No. 12 machine taking the lead from No. 29 Rich Sanders on lap 10. As Whaley could almost taste victory lane, Hennessy came in and stole checkers on the nineteenth lap, forcing Whaley to settle for second. Another hard fought night by No. 91 Kraig Handley who took third. No. 57 Lee Sandercock placed fourth and No. 39 Jonah Mutton took fifth place.

In a caution riddled Thunder Stock Triple Crown, that weeded out a good portion of the field, No. 03 Justin Ramsay remained untouched through 25 laps. He took the lead early on in the second lap. Champ No. 72 Doug Anderson’s infamous smooth moves were on point again as he moved through the leaders on a mission to steal Ramsay’s thunder again. Thirsty for vengeance after Anderson robbed him of opening night checkers on the last lap, Ramsay held the hammer down Saturday parking it at the finish line first forcing ‘The Big Smooth’ to settle for second.

Back to back wins for Flieler

Adam Flieler is proving to be a solid contender again this season in his No. 11 Comp 4 machine as snagged himself back to back wins. Just when the pack lead by No. 43 Devon Kippen was halfway home, Flieler took the top spot for the remaining four laps. A solid chase by No. 0 Tyler French and No. 14 Matthew Moore who came out with second and third place finishes respectively. 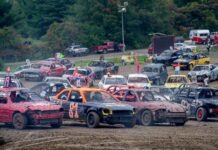 Brighton Eve of Destruction is Sold Out!