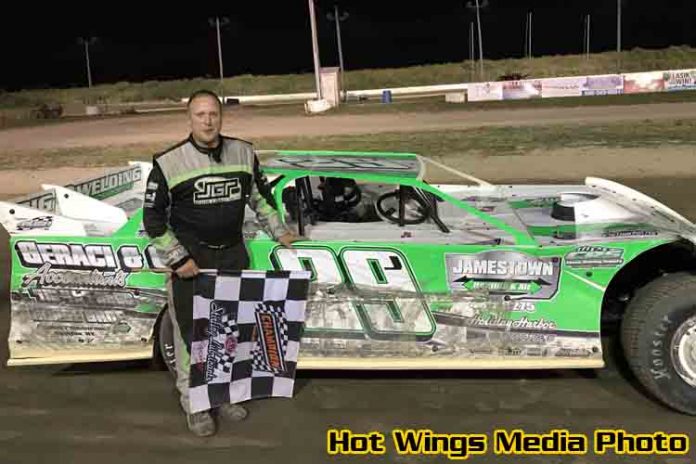 BATAVIA, NY – Jason Genco made an aggressive maneuver on a late-race restart to get by leader Bill Holmes and capture his second win of the year in the Crate Late Models at Genesee Speedway on a scorching-hot night for racing.

Genco, of Frewsburg, NY, drew the pole position for the 25-lap feature but surrendered the lead on the initial start to local Bill Holmes, who held a steady lead for the first 16 laps of the race. On the lap 17 restart, Genco stayed tight coming to the green and then dove underneath the No. 65 to dive by the leader with only slight contact. From there he would set sail and cruise to the win.

“The top is always so good here and he left the door open and I had to take it,” said Genco in Victory Lane. “(Holmes) and I talked after and he knew he left it open so I was glad to go get it.”

Genco and Holmes were easily the class of the field, pulling away from much of the race. The second place finish vaults Holmes back in to the championship discussion. Doug Ricotta had his best result of the year, finishing in third, with Jon Rivers and David Pangrazio completing the top five.

Dave Conant was able to score his second win at Genesee this season, but had to hold back some fierce challenges to capture the victory in the Sportsman. Conant, of Pendleton, lead all 25 laps of a stacked feature, jumping to the lead from the outside pole. After a lap seven restart, Austin Susice used the bottom line to go from fourth up to second and then apply pressure to “Cadillac” over the second half of the race. On multiple occasions, Susice was able to pull under the No. 44, but never had the momentum to complete a pass. In the closing circuits, Conant was able to create distance in lapped traffic and gain a healthy advantage to secure the win, due in large part to driving the car harder in to the corner to compensate for his tight condition. Susice was second for the second time this year, while Kyle Inman drove back up to finish in third, just ahead of a stout AJ Custodi. Cam Tuttle completed the top five.


Dave DuBois won his sixth feature in as many races in the 360 Late Models, but he had to earn this one, as a challenge on the opening start opened up his eyes to a new groove on the track. Tommy Kemp powered in to the lead from the pole position and lead for the first two circuits until the first caution. On the ensuing restart, Kemp selected to start in the top lane and DuBois knew that was his chance to take the lead back, which he did and then took off from there. Kemp would hold off John Zimmerman for second.

Easily the wildest race of the night featured the Street Stock as the leader dropped out on three occasions, including coming to the checkered flags. Earlier leader Jesse Qutermous fell out of the lead on lap 7 after showing some smoke and handed the top spot to Byron Dewitt. Coming to the white flag, Dewitt also had an engine issue and fell out, which gave the lead to point leader Dennis Cummings, only to see Cummings’ No. 74D fail off of turn two, which allowed Doug Jones to get his first win in two years. Jones, entered the final restart in third and had just passed Bill Demick for second when Cummings broke, allowing him to scoot on by for the victory. Demick would move up to finish second with Mike Kelly and Ryan Allen moving up to third and fourth, respectively, ahead of Cummings who held on to fifth.

Cole Susice became the fifth different driver to win a Mini Stock Feature at Genesee this season as rim-rode to his first career victory in Batavia. Susice, of Ransomville, got by early leader Bobby Dickinson on lap three and then had to withstand his challenges to gain distance through the middle of the race. Dickinson would have to settle for second, his best finish of the year. Eric Weis, Chris Leone and Bill Weller Jr rounded out the top five.

The Bandit race saw point leader Bailey Logsdon lead wire-to-wire to claim her fourth win of the season. The race started on a rough note when polesitter Greenley George flipped wildly down the frontstretch. She was able to climb from her car and exclaim “That was fun!” As the race ran green, Logsdon was chased by heat winner Jessica Traxler, as the duo lapped the rest of the field. Randy Gregory would get by his brother, Brian for third place.

Genesee Speedway will lie dormant next Saturday and then get back to action on Saturday, July 14, when Beamer’s Sales & Service presents the annual Autograph Night on the front stretch. All six weekly classes will be in competition, starting at 6:00 P.M. For more information, log on to www.genesee-speedway.com. 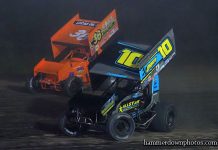 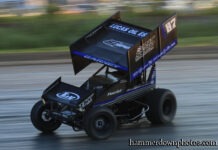