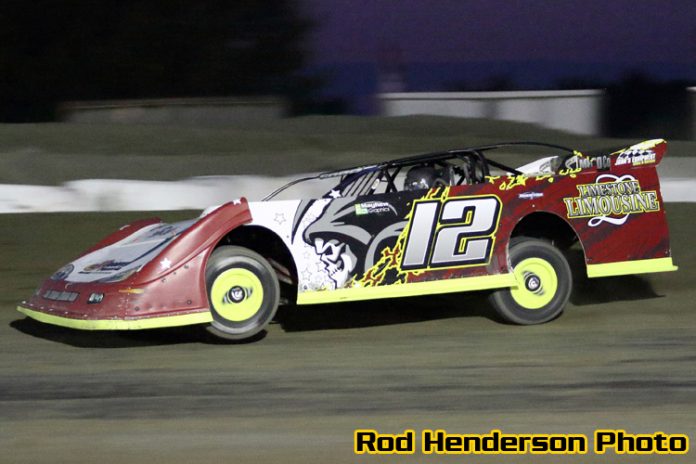 Qualifying time trials kicked the evening into high gear. Campbellford Chrysler Driver of the Week No. 07 Curtis King set a new track record in the Bainer’s OilGARD Anti Rust Canadian Modified competition with a lap of 15.227 seconds just 0.049 seconds faster than the mark set by Andrew Hennessy on May 21, 2016. Charlie Sandercock was the fastest time award winner in the Vanderlaan Building Products Pro Late Model qualifying, Justin Ramsay claimed the award for the Brighton Automotive Thunder Stocks and Kevin Hertendy earned the award with the Bill John’s Comp 4s.

Sopaz Sweeps the Night for First Win
Charlie Sandercock (No. 57) looked like he was well on his way to securing his second Northeast Late Model Alliance win Saturday. From his second starting position, Sanderock wasted no time jumping into the lead ahead of pole sitter Adam Turner (No. 88) on the first trip around. Sandercock was quick to check out for 10 electrifying laps. A caution riddled feature forced multiple restarts paving the way for a thrilling battle by Sandercock and Turner for the lead. Kyle Sopaz was fierce in his No. 12 machine working his way to the top from his fifth starting position. Sopaz stole the lead from Sandercock on lap 26 and then dominated the final 14 laps to earn his first season win with the Vanderlaan Building Products Late Model Division. Sanderock settled for second. No. 29 Phil Potts was solid and consistent earning a third-place finish. No. 5 Steve Baldwin held his own. Baldwin started fourth and that’s right where he finished. Turner took home a hard fought fifth place finish.

Nayler Nails Season Debut
It didn’t take long for Adam Nayler (No. 7) to get back to his winning ways at Brighton Speedway Saturday night. The former Pro Late Model driver made his 2018 Bainer’s OilGARD Anti Rust Canadian Modified season debut with a bang by wheeling his No. 7 to victory lane.

The win didn’t come easy as a highly competitive field of veteran modified drivers made Nayler work for it. No. 91 Kraig Handley and No. 87 Andrew Hennessy led the field to green for the 30-lap ABC Taxi Triple Crown Race 2. Hennessy took an early lead and dominated the field for 15-laps. While the reining champ was trying to make it through traffic he made a split decision to take it three wide from down low. Hennessy’s front tires got caught on an implement tire and he flipped knocking the 87 out of contention for the night. On the restart runner up No. 32 Doug O’Blenis set his sights on first and snapped the lead from Handley on the 16th trip around. Nayler followed suit and put the hammer down passing Handley. Nayler went door to door with O’Blenis in an electrifying battle to the finish. Nayler scored his first win with O’Blenis securing second. (No. 12) Adam Whaley scooped third, (No. 07) Curtis King placed fourth and (No. 39) Jonah Mutton took home fifth.


Anderson Scores Third Win in Thriller
Doug Anderson (No. 72) and Wade Purchase (No. 53) waged one of the best battles of the season in the Brighton Automotive Thunder Stock division with Anderson emerging the victor at the checkered flag. (No.85) Austin Reid and (No. 53) Wade Purchase took the field to green in the Duel in the Dirt 25-lap feature. Purchase jumped to take an early lead and pushed hard to try and get some distance from the rest of the field. From his sixth starting position, Anderson took little time moving into runner up on the fourth time by. From that point Anderson and Purchase treated race fans to an exhilarating display of side by side racing at its finest for 21 intoxicating laps. Anderson sailed to victory lane to take his second consecutive win, third overall with Purchase scoring a well-deserved second place. (No. 51) Mike Freeman went on to take third, (No. 2) Warren Mowat in fourth and (No. 85) Austin Reid placed fourth respectively.

French Takes First Season Win
(No. 0) Tyler French took the lead at the green flag and didn’t let off the throttle throughout the Bill John’s Comp 4 feature. French held commanding control for 20 laps and appeared unfazed as Adam Flieler gave incredible chase eager to get his (No. 11) machine back into victory lane. French parked it for the first time this season, forcing Flieler to take runner up bragging rights. (No. 82) Terry Gorgerat kept the pace the entire race to earn third place, (No. 43) Devon Kippen won fourth and (No.50) Willy Bulten secured a fifth place finish.

Harrington and Kotsilidis win stinger features
The half way point was a lucky one for both Quinte Septic Stinger feature winners Saturday night. Pole sitter (No. 63) James Harrington snagged the lead back on lap 7 from (No. 22) Daniel Dick to take his first checkered flag of the season in the Quinte Septic Jr. Stinger 12-lap feature. (No. 11) Jim Kotsilidis snapped the lead from (No. 25) Lawrence Evenden on the sixth time by to score his first season win in the Quinte Septic Sr. Stinger 12-lap race.