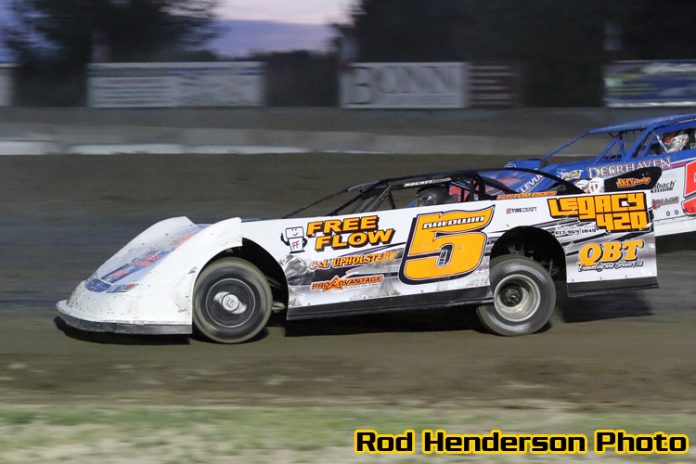 BRIGHTON, ONT – The Southern Ontario Sprints invaded Brighton Speedway for Round Two of the 2018 tour on Saturday night. The 20 sprint cars and a full field of stock cars in attendance raced before a full crowd at the one-third mile oval Vanzuylen Tire & Alignment and Electro Cables night.

No. 97 Cory Turner brought the Southern Ontario Sprints to green and he never let off the loud pedal. The Caistor Centre native dominated the entire 25-lap feature. On the second time by, No. 10 Mitch Brown worked his way into runner up from his third starting position and remained consistent on a mission to catch Turner. Chris Jones was fierce in his 11J machine as he worked his way into the top five coming to rest in between the Brown brothers. Mitch Brown and Jones engaged in a thrilling side by side battle for 13 laps. Turner disappeared in lapped traffic with three to go as he struggled to navigate through a cluster of slower cars as Brown and Jones started to close. On the 23rd lap No. 15 Mike Farrell and No. 55 Mike Thorne came together on turn 2 forcing a caution. Resetting the field worked to Turner’s advantage as he no longer had to fight through traffic. Turner sailed to victory lane clinching his first 2018 season win at Brighton leaving Brown to settle for a well-earned second and Jones a hard fought third place finish. No.1-10 Jake Brown finished fourth and No. 91 Ryan Turner fifth.

Pole sitter No. 29 Phil Potts earned prime real estate by virtue of a heat-race win and used the advantage to pace 24 laps of the 35-lap Hotch’s Auto Parts Late Model Triple Crown Race 2. Potts jumped out to an early lead over second-place starter No. 55 Bradley Rayner and it grew to five car lengths. No. 5 Steve Baldwin jockeyed his way into third spot from his fifth place starting point to duel with Rayner and No. 1 Andy Mayhew. Like a thief in the night, No. 57 Charlie Sandercock came from behind strong arming his way from the back row into second on the 16th lap to duke it out with Potts. Sandercock chased Potts with Baldwin right in the rear view. Baldwin snapped the lead on the 25th lap and took off. With two laps to go, Sandercock returned on the high side to snatch top spot. But it didn’t last long. On the last lap Baldwin took it back and cruised to victory lane clinching his second season win leaving Sandercock to settle for second. Mayhew earned third, Potts fourth and No. 46 Brandon Mowat finished fifth.

Brighton’s Jonah Mutton occupied pole position in his No. 39 for the 25-lap Bainer’s OilGARD Canadian Modified feature and never relinquished the point.

Mutton and No. 32 Doug O’Blenis went head to head for 13 electrifying laps. The pair were unfazed as No. 14 Brandt Graham, No. 87 Andrew Hennessy, No. 91 Kraig Handley and No. 07 Curtis King muscled their way up from the back of the pack.
Mechanical problems for O’Blenis knocked him out of contention, pushing No. 3 Nathan Rinaldi into runner up. Rinaldi never let Mutton slip from his sights but as the heavy field bit down on the inside line rounding turn four to victory lane, you could throw a blanket over the top five cars. The close quarters causing contact between and number of cars and Rinaldi to spin while Mutton sailed to checkers with Handley right behind. Graham earned third place, King fourth and Hennessy fifth.

French flawless to the finish

No. 11 Adam Flieler took the field of Bill John’s Comp 4s to green during the 15-lap feature Saturday. Flieler hung on for four laps but lost a battle with second place starter No. 82 Terry Gorgevat. He was unable to keep the pace as No. 0 Tyler French came from high on the outside to score the lead. French took off to victory lane, leaving Flieler to settle for second and Gorgevat in third.

Next week at Brighton

The Wall of Fame Inductions will commence at 6:00 PM honouring three new inductees.