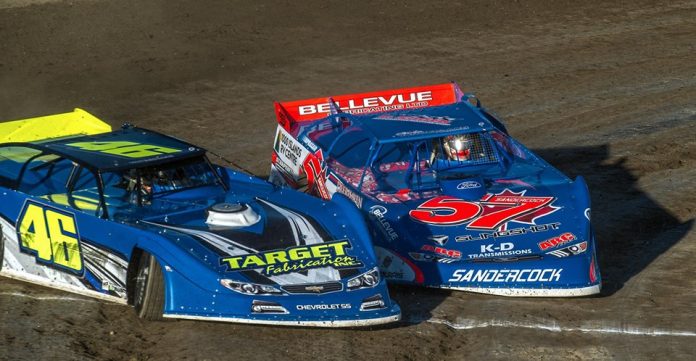 BRIGHTON, ONT – With spring in the air it is time to get back to business ramping up for the 52nd season of racing on the clay oval and it all begins this weekend Saturday, May 4th with the Loud & Dirty Brand Season Opener presented by Coca Cola at Brighton Speedway. On tap for opening night drivers from the Vanderlaan Building Products Late Models, OilGARD Anti Rust Canadian Modifieds, Brighton Automotive Thunder Stocks and Bill’s Johns Comp 4 & Mini Stocks are excited to hit the dirt for the first time in 2019!

The 52nd annual season opener will once again be in support of the Brighton Fare Share food Bank, admission for Saturday nights kick off is only $4 for adults, youths and seniors and $2 for children 7-12 with a nonperishable food donation. Brighton fans have a long history of throwing their support behind this event making this one of the food banks largest food drives throughout the year.

Unfortunately Mother Nature took the track time away from the drivers this past weekend but more than 30 cars still showed up on Sunday to go through the technical safety inspection to ensure they will be ready to go Saturday night. “Some beautiful looking cars were on site on Sunday and anticipation for the season to start is high:” commented Track Promoter Mark Rinaldi.

Opening night kicks off the 2019 points battles in the four divisions and three of the four divisions will see returning champions. The Vanderlaan Building Product Late Models will see Charlie Sandercock return in order to defend his championship against the likes of Brandon Mowat, Steve Baldwin, Caley Weese and a host of other competitors.

In the OilGARD Anti Rust Canadian Modifieds Andrew Hennessy returns in the hot seat trying to defend his crown. Hennessy has a new car on tap 2019 but will have his hands full from a number of difference competitors including new comer transplants from asphalt racing Linc Brown and Dan Price making their dirt track debut.


In what has proven to be the most competitive division the last few seasons the Brighton Automotive Thunder Stocks looks to live up to its expectations in 2019. The three big guns Doug Anderson, Justin Ramsay and defending champion Wade Purchase are all returning but with over 30 cars registered in the division they will have near perfect seasons and a probably a little luck if they want to return to the champions podium.

The Bills John’s Comp 4 division will see a new champion in 2019 as defending champ Tyler French has made the jump to the Thunder Stock ranks. Other changes in the Comp 4 division as announced in 2018 is the combination of Comp 4 and the new Mini Stock division. Mini Stocks will run together with Comp 4’s but will run for separate championships meaning there will actually be two Championships up for grabs. Mini Stock drivers will follow the Ontario Dirt Competition Committee rules package and be eligible to race at any dirt track in Ontario and compete in the Mini Stock Duel in the Dirt Series.

Loud & Dirty Brand is a Canadian apparel company promoting blue collar motorsports culture with simplicity and style. Loud & Dirty will have their Blue Collar Clothing on display and for sale at various times throughout the 2019 season including this Saturday night. For complete details visit their Facebook page Loud&Dirty Brand.

Coca Cola Canada is the official refreshment provider of the Brighton Speedway and is available at all concession stations throughout the Speedway grounds. For complete details visit them on Facebook Coca-Cola Canada.