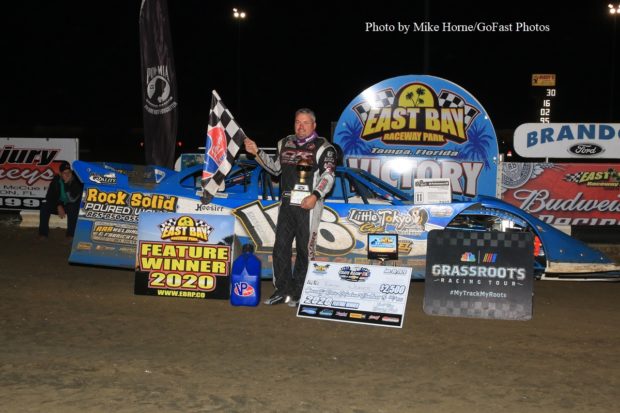 GIBSONTON, FL – The second week of the 2020 Winternationals at East Bay Raceway Park offered up the newly-named Crate Racin’ USA Late Models (formerly known as the Durrence-Layne Chevrolet Late Models), the Top Gun Sprints and the V-8 Warrior/Thunderstocks. The opening night car count was a respectable 87 cars, led by the Late Models with 50 in the pit area.

Randy Weaver of Crossville, TN was surprised to be in Victory Lane  Thursday night  after the finish of the 30-lap Newsome Raceway Parts Crate Racin’ USA Dirt Late Model Series Winter Shootout race.  Weaver only led one lap of the race, but it was the one that counted.

Weaver found himself the leader on a last lap restart after early race leader Max Blair  was penalized for a restart violation.  Blair was ticketed for brake checking the field on a restart, and was sent to the tail of the field.  That gave Weaver the lead for a one lap dash to the checkered flag.

“I hate to win races this way, and I feel bad for Max because I had a second-place car tonight,” Weaver said.  “I’m coming back to race after a couple of years off, and we’re having fun again.  It doesn’t matter if we win or finish 24th.  We’re having fun.”

Weaver was off for two years after suffering a head injury during a race.  Weaver took the time off and let his head heal properly.  He got a doctor’s green light to return to the cockpit of a dirt late model, and it didn’t take long for Weaver to wear off the ring rust.

In preliminary action, the Fast Qualifier was Travis Varnadore, who out-timed the 51-car field with a lap around the 1/3-mile “Clay By The Bay” in 15.883 seconds.

Blair took the lead from the pole position at the start of the race. Keith Nosbisch was able to get around Phillip Cobb for the second spot on lap seven while Blair pulled out to a ten car-length advantage.  The leader caught the cars on tail end of the lead lap by lap ten.

Weaver worked his way of to the third spot by the halfway point in the race, and he got by Nosbisch for the second spot on lap 18.  By the time he got to the second spot, Weaver was a half-straightaway behind Blair.  On lap 20, the lapped cars and Blair’s big lead went away when Cobb, Joseph Joiner, and Varnadore got together in turn four to bring out the caution flag.

Blair pulled away on the restart while Weaver and Nosbisch raced side-by-side for second, swapping the spot and racing grooves several times over the next five laps.

The caution flag came out on lap 25 for debris. Blair once again pulled away on the restart, and Weaver sailed around Nosbisch on the high side to take second.

Blair set a steady pace with the field doubled up behind him into turn three.  As Blair came off the fourth turn, he slowed and jammed the field up behind him causing a couple of cars to spin.  The caution flag came out, and Blair was ticketed with the caution for brake checking the field.  That gave the lead to Weaver, who took the green and white flags together and he led the last lap for the win.

The 25-lap Top Gun Sprint feature had no shortage of excitement as the 22 cars battled through three heat races before lining up for the A Main. Joe Zuczek, Justin Webster and 2019 Top Gun Sprints champion A.J. Maddox captured the heat races, putting themselves in position to qualify for the Lee and Jeff Barfield Memorial Sweep bonus of $300.

Maddox opened up by powering from the second row into the lead with Brandon Grubaugh in tow. In short order, Shane Butler moved from fourth to second before the first caution waved on lap 3. Danny Sams brought his 1* to third place as the leaders hit lapped traffic. Maddox would have better fortune as he was able to escape the pressure from Butler. Butler did catch and pass Maddox on lap eight, but Maddox returned the favor a lap later. Garrett Green moved into the top five after starting on the outside of the eighth row. On lap 11, Maddox drifted high in turn four and nearly lost the handle, but regained control and kept the lead as the caution came out on lap 14. The restart kept the lapped cars in their spot, which put two cars between Maddox and Butler. The racing picked up and action was all around the race track until a red flag stopped progress on lap 23 when Grubaugh and Tim Fricke collided with Fricke toppling. Both drivers were uninjured, but could not continue the event. On the restart, Green, who had moved to third, stuck the nose of his #82 between the front runners for a three-wide challenge. As the field came down to the checkered flag, it was Green grabbing his first East Bay Raceway Park feature win. The feature marks the start of the 2020 season for the Top Gun Sprints.