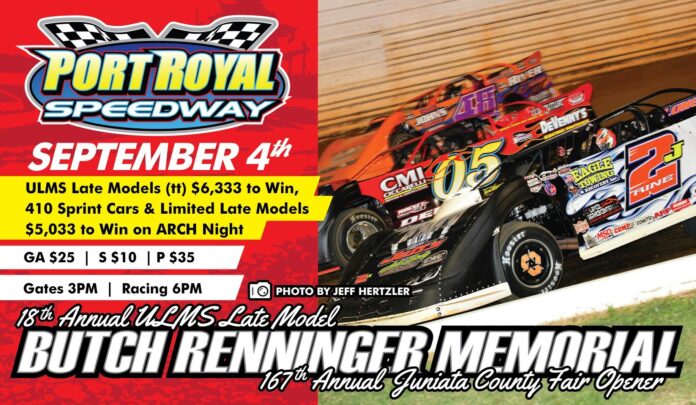 The event honors the legendary Butch Renninger, who sits fourth on the all-time winners list in the Super Late model division with 41 career victories and three track championships (1966, 1967 and 1970) to his name. He also was a former track champion in the Enduro division in 2003 and is the second all-time winningest driver in the division with four victories. Renninger also served diligently on the board of the speedway for decades and oversaw track preparation and concessions during that time.

Aside from racing, Renninger was a local Juniata County resident, a family-man, a husband, father, a friend and a businessman. He was the kind of man that our little slice of heaven in Juniata County could be proud of and his legacy still lives today in those he knew and those who carry on with the same sense of hard work and kindness he lived with.

Well after his time behind the wheel had concluded, it was individuals like Renninger behind the scenes pushing on to make the Port Royal Speedway successful and without him our little track could have never reached the heights it has today. Just like many of his Juniata County locals, he gave his life to Port Royal and our sport and it’s that love and passion that continues today. As a matter of fact, his two grandsons, Devin Hart and Trent Brenneman, still take to the track weekly in a No. 33 in his honor. While Butch Renninger left us too early, it is guaranteed he has not been forgotten and traces of his life run rampant every time the green flag drops at the Speed Palace.

You can’t understand your future without embracing your past and this race and Butch Rennigner does that perfectly as we continue to take Port Royal Speedway into the hearts and minds of race fans all over the country for years to come.

Specific to the limited late model division, this will be the largest paying race for them in the history of the division and quite possibly the state. Not only will this add prestige and excitement to the event, it shows the continued growth of the Speedway and it’s support of all the divisions that compete at it regularly.

Crate motors will not be permitted to participate in the Limited Late Model portion of the event.

The 410 Sprint Cars will race for $5000 to win courtesy of Lauver’s Concessions in preparation for a big week of racing for the division.

Entering the weekend, the points chase for the Super Late Models is one the tightest and most exciting in recent memory at the Speedway. Dylan Yoder holds a narrow 5-point advantage over Gary Stuhler, followed by Ross Robinson (-35), Colton Flinner (-120) and Jeff Rine (-275). Remarkably, none of the top four drivers in the standings have yet to win a race in 2021.

In Limited Late Model competition, Devin Hart enters the weekend as the series points leader by a 150 points over second-place Shawn Shoemaker. Andrew Yoder (-235), Todd Snook (-385), and Kenny Yoder (-405) round out the top five.

Finally, in the 410 Sprint Car division, Logan Wagner appears well on his way to his fourth consecutive points championship as he holds a 265-point advantage over his father, Mike Wagner. Dylan Cisney (-280), Jeff Halligan (-325) and Gerard McIntyre (-970) round out the top five.

To make this event happen, several key sponsors have come on board in support of it and the Renninger family legacy. Packer’s Concessions, LLC., Weikert’s Livestock, Mifflin Hill Beverage, Beerhill Gang TV, Mike Cleck Paving & Sealcoating, Inc., RV 4 Wheel Drive & Performance Automotive Inc and an anonymous friend of the Speedway have all chipped in various amounts to push the purses to new heights.

Also up for grabs for the drivers in competition will be several contingency awards presented by several more sponsors. Both the Super Late Models and the Limited Late Models will receive lap sponsor bonuses that will pay $33 per lap courtesy of fans and various sponsors.

In the Super Late Model division, heat race winners will receive $333 courtesy of Tedd Reitz, while fast time in qualifying will receive $133 courtesy of Snyder’s Radiator Shop.. There will also be a $133 hard luck award for the first non-qualifier courtesy of Gullwing Aviation, LLC and Pellman Trade.

Also, $50 will go to 2nd in each super late model heat courtesy of Keister Karting Products and a $150 hard charger award courtesy of Barron’s Racing Engines!

For the Limited Late Model division, heat race winners will receive $100 each courtesy of Garman Concrete & Construction, while the Fast-Time Award winner will receive $133 courtesy of the The Gridiron Pub-New Page. Gullwing Aviation will present a hard-luck award of $133 to the first non-qualifier, while Pellman Trade will offer $33 extra to the highest finishing Juniata County driver in the field.

Also, $33 will go to 2nd in each limited late model heat courtesy of Bill and Kay Weimer and a $333 hard charger award courtesy of Zimmerman Truck Repair.

Admission for the event will be $25 for General Admission, $10 for Students and $35 for Pits Admission. Gates will open at 3:00pm EST, while racing is scheduled to kick off at 6:00pm EST.

For those unable to attend, racing will again be available via FloRacing and more information can be found at www.floracing.com 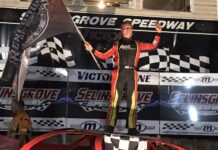