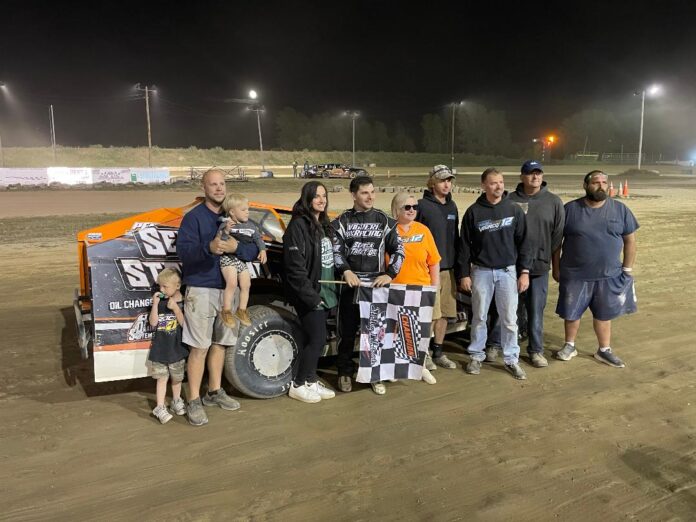 BATAVIA, NY- Any night is a good night to win a feature event, but when one of your key supporters is also sponsoring the night, winning is even sweeter.

On East Coast Speed Night, Jon Rivers was able to run down invader Austin Allen on lap 12 of the 25-lap Late Model Feature and then held off Allen and two other top competitors to capture his first victory in nearly four years in Batavia.

“To win on East Coast Speed Night is just awesome,” said Rivers in Victory Lane.  “We’ve had a fast car the last five races we just needed things to go our way.”

One week ago, Rivers was in second place and chasing down the leader when his No. 85 lost break pressure entering turn one and when flying off the track. He was fortunate enough to not hit the wall and after fixing the car for Thursday, he found himself in a similar position on Saturday Night after taking second from point leader Doug Ricotta early in the feature.

On a lap 10 restart, Rivers would stay in close contact with Austin Allen, who was making only his second start at Genesee in 2022.  A lap after the restart, Rivers got his car to stick off the bottom of turn two and was able to drive under the No. 32 to get out in front.  Allen was not ready to let “Jonzilla” run off easily though, as he stayed within range of the lead.

As the leaders worked through traffic, Ricotta, along with Chad Homan, were able to make it a four-car battle for the top spot.  Without a caution flag mixing things up, Rivers was able to maintain his advantage to hang on for the win, his first since September 1 of 2018.  Allen’s completed a strong run in second while Ricotta logged another quality points day in third.  Chad Homan snapped a rough stretch of DNF’s to come home in fourth.  JJ Mazur ran a solid race to round out the top five. 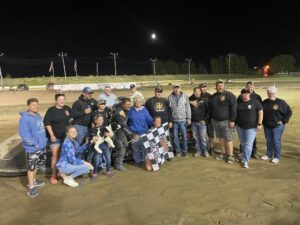 Phil Vigneri III was being chased down by Jim Harbison for the lead just after halfway in the Sportsman Feature and it appeared that it would only be a matter of time before there was a lead change, but a caution flag on lap 15 gave Vigneri a chance to reset and hit his marks to expand his lead on the restart and run off to his fourth win of the season.

Vigneri, of Elba, strengthened his point lead by leading the 25-lap event wire-to-wire.  Vigneri started on the outside of the front row and quickly jumped in to the lead and then stayed in the outside groove the rest of the way, which is not always his preferred line on the 1/3-mile.

“I saw Ray Bliss (Thursday’s Feature Winner) run the top and figured that was the play as a good starting position definitely helped tonight,” said Vigneri in Victory Lane.  “I was glad to see that caution come out because Jim (Harbison) was running good on the bottom.  I have to thank him though because he ran me clean and that goes a long way.”

As Vigneri pulled away, Harbison was able to finish in second to put together a solid run two days after breaking a drive shaft.  Noah Walker, would rally from issues in his heat race to drive up to finish in third.  Dylan Duhow made his first appearance at Genesee this year finish in fourth while Larry Vick drove up from his 10th starting spot to round out the top five. 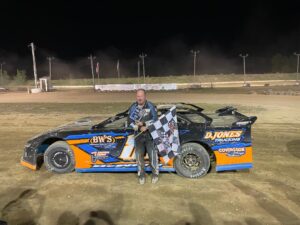 Byron Dewitt was leading his Street Stock heat race coming to the white flag when his car inexplicably shut off; thankfully for Dewitt he was able to re-fire his No. 87H to hold on for a redraw spot, which enabled him the third starting spot in the feature, where he quickly jumped in front and stayed there to win his second feature of the year.  Dewitt took the lead from point leader Bill Taylor on lap three when the No. 1 dropped out with a mechanical failure; from that point, Dewitt was easily the class of the field and only had to worry about if his car would stay together all the way to the conclusion of the 20-lap feature.  As Dewitt was running off to the victory, Rich Conte was able to get a much-needed runner-up finish.  Jesse Qutermous held off Mike Kelly at the finish to cross in third and pick up the hard charger honors along the way. 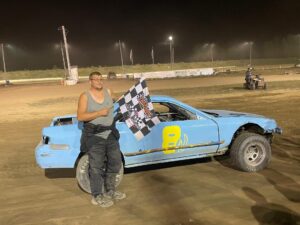 When James Gayton crashed at the completion of the first lap of the Mini Stock Feature, it meant someone new was going to win the feature for the first time in eight races; Cody Wise was the driver to do that as he passed Curt Rung with three laps remaining for the lead and drove away for his first career victory.  Wise, of Nunda, reeled in Rung’s No. 24R early in the feature but was having trouble completing a pass on the bottom.  Just after halfway, Wise fell in behind the leader and built up his momentum to complete a slider on lap 12 to take the lead for good.  Rung would hold for second while Olivia Coniber closed late but would settle for third for the second-straight race. 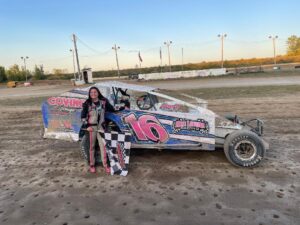 Allison Dewitt had won four of the first five Novice Sportsman races of the season but it was not until Saturday Night where she was able to claim her fifth feature victory.  Dewitt, of LeRoy, lost the lead on the opening lap in turns three and four to John Livingston Jr. but was able to retake the top spot in the next set of corners to take back command of the field.  Two late-race restarts would force Dewitt to hit her marks with the No. 16 to secure the win and strengthen her point lead.  Casey Jonathan was able to drive up through to finish in second while Gregg Rauscher finished third in his first appearance in Batavia.

Seth Johnson outdueled Tyler Foster in the Bandit Feature to claim his eighth win of the season.  Foster ran down the lead in the closing laps and made a strong pair of bids underneath the leader entering turn three, including on the final circuit, but the right rear tire on the No. 53 went flat as he dove to the bottom, which allowed Johnson to hang on for the win.  Johnson has now won all five of the features that were run at the end of the night.

The Classics on Dirt Vintage Stock Cars made their lone appearance of the year on Saturday and put on a thrilling feature with four lead changes, including one on the final lap.  Mark Schenck, who took the lead from Ed Lawrence on lap two, gave it back to him just before halfway.  On the final lap, Schenck ran down Lawrence in lapped traffic and made a wild three-wide maneuver to split Lawrence’s No. 9J and a lapped car to put his No. 46 to get the lead for the final set of corners and score the victory in the Modified Class.  Tom Church won the Sportsman Class while Brent Williams was the Vintage Class winner.

Racing will be off next Saturday at Genesee before roaring back to life on Saturday, August 27 for the Gene Dewitt Memorial featuring Autograph Night.  For more information, visit www.Genesee-Speedway.com.