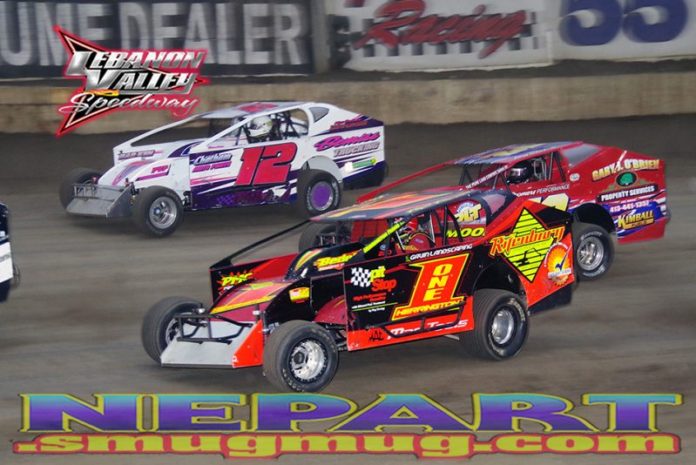 WEST LEBANON, NY – Saturday night was the final night of racing at Lebanon Valley for 2016. A number of championships were still up for grabs as fans and drivers were greeted with unusually warm and humid weather for the second weekend of September.

The Small Block Modified championship had already been decided last week as Kenny Tremont, Jr. clinched it, but there were still positions up for grabs. Brett Haas was all but locked into second. However, his race ended as soon as it began when the transmission failed in the No. 55.

Bryan McGuire parlayed a heat race win into the pole for the feature. Early on, McGuire appeared to be pretty quick, but the time to make hay was very early. On the complete restart, Jason Herrington was able to take second from Chad Pierce. He then immediately put the pressure on McGuire and took little more than a lap to take the lead away.

Pierce held onto third and was running well until his No. 83 quit in turn 4, bringing out another yellow. On the restart, Olden Dwyer was able to get past McGuire for second and set off in search of Herrington. However, Herrington was able to run off and hide.

Further back, a number of drivers had issues. J.R. Heffner pulled off shortly after the restart with mechanical issues. Last week’s winner Chad Jeseo had torsion bar issues and was forced to retire

For Herrington, it had been a year since he’d been in position to win. Unlike that last time, he was able to hold on to take a well-deserved victory. Afterwards, Herrington was very happy with his evening and took time to note his mother’s presence.

“My car was awesome tonight,” Herrington said in the pits. “Last year, J.R. [Heffner] got me. I wasn’t going to let that happen tonight.

“My mom, who hasn’t been to the races in a couple of years since her health wasn’t doing too well, she was here tonight,” Herrington continued. “To be honest, I think my mom said a prayer and helped me win this thing.”

Dwyer held on to finish second, followed by Drellos. Kenny Tremont, Jr. finished fourth and padded his championship margin. The final margin over Haas was 119 points. Brian Sandstedt was fifth.

In Sportsman, Cody Ochs started from the pole and opened up a good-sized gap on the field. Rob Maxon, who was very confident coming into the race, moved up to second early on.

Points leader Jeff Watson lost 24 points of his lead on Sep. 3 due to a busted rocker arm. He entered the night with a 16-point advantage on John Virgilio and only needed to keep him in sight to win. He did that and more, moving up from the ninth starting spot and quickly putting himself into the top 5.

Maxon was able to run down Ochs with six laps to go and got to the inside of him on the frontstretch. In turn 1, Maxon was able to make the pass. However, said pass was negated when Robby Knipe hit the wall in turn 3 to bring out the only caution of the race.

On the restart, Maxon was able to take the lead from Ochs again in turn 1. This time, he was able to make it stick and pulled away to take the win on-track. With a lap and change to go, Timothy Davis was able to get by Ochs for second.

In post-race technical inspection, it was determined that the camshaft in Maxon’s engine was illegal. As a result, the technical staff disqualified Maxon.

Davis’ pass on Ochs in the closing laps turned out to be the difference as Davis claimed his second victory of the year. Both wins came as a result of the flagged winner being disqualified.

Ochs ended up second, while Watson was third and Virgilio fourth. As a result, Watson claimed his fifth track championship by 18 points. Whitey Slavin finished fifth, but dropped out of the top 5 in points by virtue of Davis winning.

In Pure Stock, Nick Reilly, Scott Morris and Larry Perez each won features. Jason Meltz finished eighth in feature No. 3, but that was enough for him to earn his second consecutive Pure Stock championship.

In 4-Cylinders, Jim Williams took the lead from pole-sitter Bradley Batho with three laps to go to take the win. That was enough to overcome a two-point deficit to Tim Meltz and give Williams the Single-Cam championship.

For the Dual-Cam racers, Saturday was supposed to feature a make-up race in addition to the regularly scheduled event. Instead, a double points 15-lap finale was held. East Greenbush’s Kenny Stager clinched the championship by starting the race, took the lead on lap 4 and won the race.

Note: Doug Olds is listed in the results for feature No. 2 because he was originally assigned to that race. An error resulted in Olds going out in the third race. In that race, Olds finished ninth on the track. 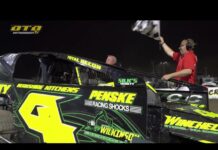