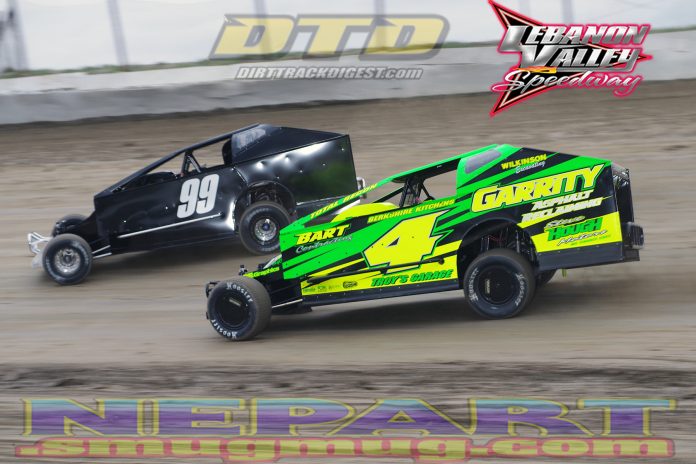 WEST LEBANON, NY – Lebanon Valley Speedway’s opening night was chilly and moist. The schedule was sped up to avoid rain and everything got in. Attrition was the name of the game in the Modifieds, but Andy Bachetti fought through the issues.

By virtue of winning his heat race, Mike King started from pole. The action started very early when Mike Keeler spun on the first lap in turn 1. Kyle Sheldon, Paul Gilardi and Matt Pupello were all collected.

One of the biggest battles in the heat races was one between defending champion Brett Hearn and Eddie Marshall. The veterans had a clean duel early in the evening and rekindled it in the feature. Hearn, who started sixth, appeared to have a fast car and tried to get to the inside of Marshall. Then, contact was made, spinning both drivers out.

Marshall was unable to restart due to a mechanical issue and was forced to retire. Hearn drove off, but dropped out due to steering issues.

On the restart, Bachetti immediately went to work on the longtime veteran. However, King was able to hold off Bachetti’s charges. The battle continued on for ten laps before Bachetti was able to get past on lap 13.


It was here that the attrition cranked up. Just as Bachetti took the lead, Kenny Tremont Jr. slowed from third with mechanical woes. Two laps later, it was King’s mount that dropped off the pace. Keeler and Steve Hough dropped out. As a result, Bachetti ended up with a four second lead over Kolby Schroder.

From here, Bachetti held on to take the opening night victory in his new No. 4. Afterwards, Bachetti was happy that he won, but still felt that he had room to improve.

“The car was ok tonight. Still feel like we have room to improve,” Bachetti said after the races. “For opening night, I’ll take it. Mike [King] was tough, I didn’t know if we were going to be able to get him. Everybody’s stepped their game up.”

In the Sportsman class, it was a two-man show between Jeff Watson and John Virgilio. Virgilio started from the pole while Watson was third. Watson quickly dispatched Frank Hoard Jr. on the start and started hunting down Virgilio. At the same time, the lead duo were able to run away from the rest of the field.

Ultimately, lapped traffic and the weather helped decide the race. During the early portion of the feature, rain fell on the high banks. As a result, some of the drivers struggled to keep pace.

Virgilio and Watson ended up nose to tail after encountering lapped traffic. That allowed Watson to slip by and take the lead on lap 7. Once in the lead, Virgilio attempted to pull out an advantage.

Debutante Joe Smith spun out on the backstretch to bring out the first yellow on lap 11, closing the pack back up. That put Michael Sabia back in the hunt. Sabia started at the rear of the field after spinning twice and getting lapped in his heat race. By halfway, he had already charged up to fifth.

On the restart, Watson and Virgilio pulled away while Whitey Slavin and Sabia made short work of Hoard. Despite a final restart with five laps to go, Virgilio could do nothing with Watson, who held on to take the win.

Behind Watson and Virgilio was Sabia in third. Slavin finished fourth, while Chris Lynch was fifth.

In Pro Stock, it was all Yetman, all the time. Yetman started third, but took very little time to get past front row starters Ed Bishop and Paul LaRochelle to take the lead. Shortly afterwards, the yellow was thrown due to water on the track in turn 3.

That yellow began a series of yellows that made it difficult to get the action. Todd Hoffman slowed on the frontstretch to draw another yellow. Next, Tom Dean spun in turn 3, sparking a number of sympathy spins. Finally, on the next restart, Hugh Page was turned into the outside wall on the frontstretch, then hit from behind by Bishop.

The incidents whittled the field down to a certain degree, but it did nothing to curb Yetman. Once the green was back out, the defending Pro Stock drove away from the field. Yetman opened up his advantage over Paul LaRochelle to nearly five seconds while Rick Duzlak gave chase.

With two laps to go, Nick Arnold hit the wall in turn 4 to bring out the final yellow. That closed the pack together, but no one could do anything to prevent Yetman from adding to his all-time leading total of Pro Stock wins.