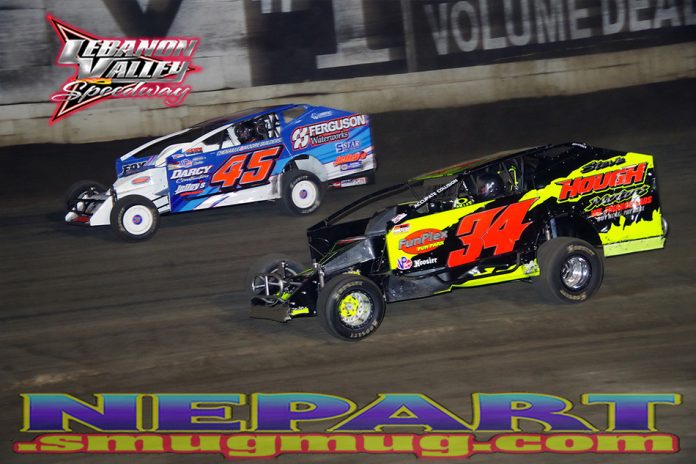 WEST LEBANON, NY – Saturday night’s Heavy Hauler-sponsored Modified feature may have only been for appearance points due to the Super DIRTcar Series race in Fulton. However, that didn’t mean that there wasn’t any action.

Steve Hough led the field to green on a blustery night. He almost immediately fell into a battle with J.R. Heffner. The veteran campaigner gave Hough all he could give, but the East Greenbush owner/driver was able to hold off Heffner’s charge.

Hough had begun to pull away a bit before Kolby Schroder spun and hit the wall in turn 3 to bring out a yellow on lap 7. Schroder was ok, but he was done for the evening.

Opening night winner Andy Bachetti spun out and hit the wall later on. Bachetti had started ninth and was on the move at the time. However, he could not continue after his incident and had to settle for 17th.

As the race continued on, Heffner continued to lose pace as compared to Hough. Behind Heffner, Elmo Reckner was in close pursuit along with Tremont.


As the race continued on, Tremont took third away and ran down Heffner. After a brief battle, Tremont was able to move into second on lap 26. Shortly after the positions changed, Paul Gilardi slowed on the backstretch to draw a caution. After being hit hard in the rear early on, Gilardi’s night came to an end four laps short of the finish.

After the restart, Tremont put extensive pressure on Hough for the lead. Hough held tough on the high line, forcing Tremont to the inside. The inside line requires more bite to make it work and Tremont just could not get enough momentum as Hough held on to take the win.

Afterwards, Hough was very pleased with his evening.

“We had a real good car tonight,” Hough said in the pits. “Feels good to be back in Victory Lane. I had a lot of big dogs behind me in Tremont, J.R. [Heffner], Bachetti was there. Feels good to beat the big guys.”

he Small Block Modified Feature saw pole sitter Olden Dwyer start from pole. That was the end of the good times for the Vermont native. After Michael Sabia brought out a quick caution on the initial start, Dwyer broke a left front hub, putting him out of the race.

Dwyer’s failure put Demetrios Drellos in the lead. Behind him were J.R. Heffner, Kenny Tremont Jr. and Brett Haas, three of the strongest contenders in the class.

Early on, Heffner pressured Drellos, but the No. 74 faded. Tremont was able to capitalize and take second away on lap 13. Tremont then hunted down Drellos. Once he reached the Queensbury native, a fierce battle began. Contact was made that adversely affected Tremont’s race car. He was able to lead lap 18, but Drellos was able to use the momentum of the outside line to get back in front.

A couple of late yellows for Kim LaVoy stalling on-track and an incident involving Frank Harper kept the field bunched up late. Over the last couple of laps, Tremont attempted to make another run on Drellos, but Drellos would not be denied the victory.

Behind Drellos and Tremont was Heffner with another third-place finish. Haas was fourth, while Frank Hoard III was fifth.

The Pro Stock feature was marred by an early big wreck. Coming to the end of the first lap, Hugh Page and Ed Bishop collided exiting turn 4. Bishop went into the blunt end of a Jersey Barrier while Page broadsided the wall. Meanwhile, a chain reaction crash wrapped up Tom O’Connor, Jay Corbin, Rob Yetman, Chuck Towslee, Dan Cote, Victor Hopkins and the father and son team of Paul and Steven LaRochelle. Both LaRochelles, Corbin, Page and Bishop were out on the spot.

Nick Hilt started from the pole and was fairly quick early on. Jason Meltz was able to give chase. Meanwhile, Yetman managed to avoid damage in the incident and quickly charged up the order. By lap 7, Yetman was already up to second. An incident between Cote, Bob Camilli and Brian Keough brought out another yellow and bunched the pack up.

A couple of laps after the restart, Yetman was able to get past Hilt and take the lead. Towslee, who had right front damage in the big wreck, followed Yetman past Hilt. From there, Yetman held off the field on a couple of late restarts to take his second consecutive win.

Towslee was second, followed by Jason Meltz in a career-best third. Hilt was fourth and Jon Routhier was fifth.